“Bad times make good policy and good times make bad policy. If you want to introduce important reforms, wait for bad times and the politicians will listen to you.”
— Chatib Basri, former Indonesia Minister of Finance

That was among the important advice and reflections based on experience given by one of the keynote speakers in the recent Asia Liberty Forum (ALF) 2018 held in Mandarin Oriental Jakarta, Indonesia last Feb. 10-11. Dr. Basri spoke on “How to do Reform in an ‘Imperfect World’: The Case of Indonesia.”

The ALF is an annual liberty conference sponsored by the Atlas Foundation (US) and co-sponsored by other organizations and independent think tanks. In this year’s event, the local host and co-sponsor is the Center for Indonesian Policy Studies (CIPS), a great and dynamic free market think tank.

Dr. Basri is a friend since 2004 when I first attended the Economic Freedom Network (EFN) Asia Conference in Hong Kong in October 2004, sponsored by the Friedrich Naumann Foundation for Freedom (FNF) and co-sponsored by the Lion Rock Institute. I was impressed by his silent, cool, and reflective composure.

He became Finance Minister from May 2013 to October 2014 when the term of former Indonesian president Susilo Bambang Yudhoyono was completed. Upon his appointment, at least one Indonesian newspaper headlined “Free marketer becomes Finance Minister.”

He started his presentation with this quote from Jean Claude-Juncker, EU President:

“We all know what to do, we just don’t know how to get re-elected after we’ve done it.”

Other statements he made in the ALF2018 were:

“One reason Indonesians are religious is because of the Government. You submit your business application to the Government, then pray to God.”

“We failed to explain the benefits of free trade to the people. The success of Asia was the success story of globalization.”

“When political power is not favorable and limited, create a success story which enables the people to see and experience positive changes, pick one that is easy to implement but the marginal gain is high, then move to more complex reforms.”

Another keynote speaker in day 1 was Suraj Vaidya, Chairman of the South Asian Association for Regional Cooperation (SAARC) Chamber of Commerce, also Chairman of the Samriddhi Prosperity Foundation in Nepal.

That statement was true in the past, remains true in the present, and will be true in the future. Trade is the best global peace maker since people and goods crossing borders create goodwill among societies, discouraging criminals, terrorists, and prohibited substances.

And this brings us to the issue of controlling high inflation in the continent.

Data from the last 12 years show that average inflation rate has been declining. 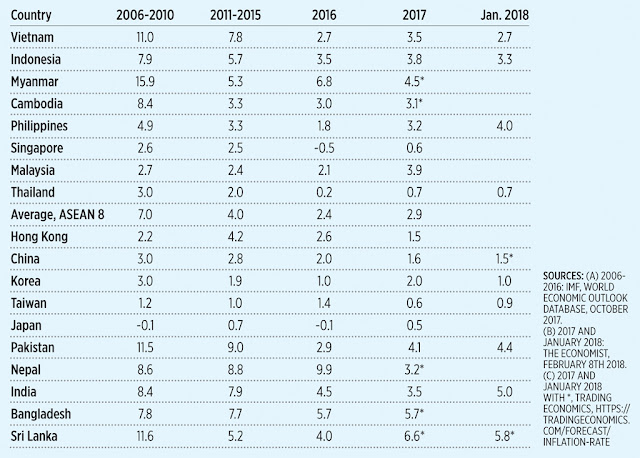 The rise in average prices in 2017 was partly due to the rise in world oil prices.

So the Philippines is the “outlier” here, experiencing higher inflation when most neighbors have declining prices. Why?

The most proximate explanation is the TRAIN law signed in December 2017. While there is a decline in personal income tax rates, there are tax hikes in oil products, sugar tax, among others.

The Philippines is entering a period of increasing government intervention, taxation, and regulation. This is not good for the people and private enterprises.