BWorld 526, Economic stagnation, de-industrialization, and lockdown in the Philippines 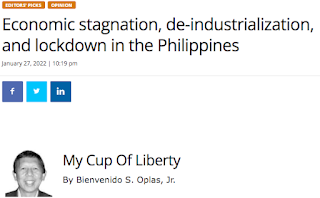 The Philippines’ GDP growth of 5.6% in 2021 looks good considering that we experienced a deep contraction of -9.6% in 2020. But is this growth really good?

The quick answer is “No.” We look at actual values of production of goods and services, not just percentage changes, and data from the excel file of the Philippine Statistics Authority (PSA) show that 2021 GDP numbers are more comparable with 2018 than 2019 levels.

One, GDP size in 2021 of P18.5 trillion is way below the 2019 level of P19.5 trillion, and slightly higher than the 2018 level of P18.3 trillion. That is nearly three years of production backwardness despite the Philippine population expanding by about 4.5 million people in those three years. 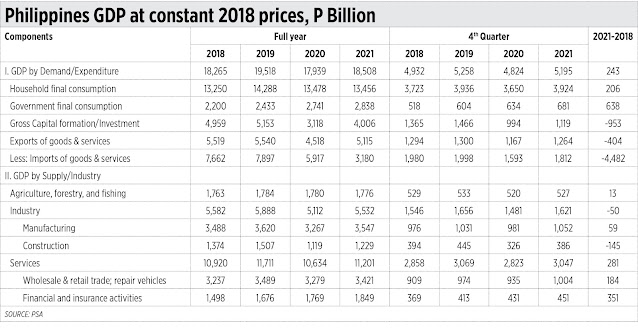 Two, household consumption, which comprises about 73% of total GDP, has expanded only by P206 billion from 2018 to 2021. Consumer confidence remains weak and muted.

Three, government consumption, which comprise about 13% of GDP, has expanded by P638 billion or three times the GDP level. Government was giving out more subsidies, paying in full the salaries, allowances, and bonuses of government personnel while joblessness in the private sector is high.

Four, capital formation or investments, which comprise about 25% of GDP, has declined big time, by nearly P1 trillion. Many businesses went bankrupt, many planned investments did not push through.

Six, in the GDP by supply or industry contributions, agriculture and fishery, which comprise about 10% of GDP, has flat output from 2018-2021.

Seven, considering the industry sector that comprises 30% of GDP, we have de-industrialized by P50 billion the past three years. While there was a modest increase in manufacturing output, construction output has declined by P145 billion.

Eight, the services sector that comprises the remaining 60% of GDP has increased by only P281 billion; banking, insurance and e-money services have increased by P351 billion.

The continued economic stagnation and business uncertainties were created by the government’s indefinite lockdown policy, exacerbated by its vaccine discrimination and segregation policy, a soft or implicit kind of mandatory vaccination.

The IATF (Inter-Agency Task Force for the Management of Emerging Infectious Diseases) should lift all lockdowns, or at least reduce the mobility Alert Levels 2 and 3 to Level 1. Starting Feb. 1, next week.
---------------