BWorld 528, Electrifying profit and penalties, the case of NGCP, DUs, and ERC 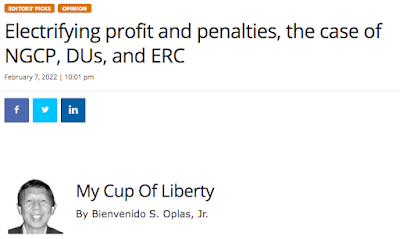 We reviewed the financial performance of the major distribution utilities (DUs), retail electricity suppliers (RES), and NGCP. This is a follow up to this column’s piece on Jan. 24 on the financial performance of major power generation companies (gencos) in the Philippines, https://www.bworldonline.com/major-power-companies-the-indonesia-coal-export-ban-and-the-pcci-election/.

What explains the huge profitability of the NGCP? And how do some DUs spend some of their profit? See these recent news reports in BusinessWorld:

So, the NGCP is not getting enough firm contracts to provide sufficient reserve requirements to avoid those pesky yellow- and red-alerts that occur yearly. It just accumulates a huge profit, which is good news for its investors (40% State Grid Corp. of China/SGCC, 30% Monte Oro Grid, 30% Calaca High).

Meralco is also earning well, but it uses part of its profit on doing more community services. When Typhoon Rai (local name “Odette”) hit the country last December and destroyed many structures in the Visayas, Meralco sent 140+ linemen and engineers with 33 vehicles and cranes to help restore electricity quickly in Cebu and Bohol.

The BusinessWorld report noted Meralco’s help, “In Cebu, over 80 engineers and linemen, and 21 vehicles have been deployed to help the Visayan Electric Co. (VECO) and Mactan Electric Co. (MECO) restore electricity service in several parts of the province. In Bohol… close to 60 personnel, along with 13 vehicles.”

The yellow- and red-alerts continued even until last January. With high power demand expected due to the campaign period starting this February and the elections this coming May, Meralco cannot rely on stable supply and price from the Wholesale Electricity Spot Market (WESM) so it has to get its own short-term contract for 170 MW from Feb. 26 to July 25.

The Energy Regulatory Commission (ERC) has made one good policy, protecting consumers in on-grid islands via lowering the cost of the universal charge for missionary electrification (UC-ME), a regular subsidy to consumers in off-grid islands and areas because they rely on gensets running on diesel which can never be cheap.

But the ERC is back to penalizing gencos. It has also penalized a number of DUs and electric cooperatives (ECs). But it seems there were few or no instances where it penalized the NGCP. Like the damage to NGCP’s Negros-Cebu submarine cable last July, caused by a Department of Public Works and Highways (DPWH) project. Instead of the NGCP going after the DPWH for the huge cost of congestion, the cost was passed on to the Negros ECs, which in turn passed this on to the consumers.

And speaking of congestion, there are a few power plants that are affected until now. Meaning, the NGCP seems not to be investing enough to quickly upgrade the transmission system (Table 2).

So, for the seven projects in Table 2, the additional capacity in Luzon, if congestion is resolved earlier, is 818 MW (668+150). For the Visayas, additional capacity would have been 177 MW. There are also delays in their plant construction but the transmission is more delayed. Then there is the never-ending Mindanao-Visayas interconnection project.

During the Independent Electricity Market Operator of the Philippines (IEMOP) media briefing on Jan. 28, they reported these additional capacities in the Luzon-Visayas grids from January-June 2022: coal 818 MW, solar 125 MW, oil-based 22 MW, geothermal 4 MW, and battery energy storage system (BESS) 180 MW. Note that BESS are not power generators, they are only storage batteries for excess supply on certain hours or days by intermittent wind and solar. I asked the IEMOP if the 180 MW BESS are mainly from SMC, they said “Yes.”

There will be very little additional capacity in Mindanao from January-June 2022 — only 3.6 MW from geothermal; zero from coal, oil-based, solar or wind, but there will be 140 MW from BESS.

So, the Philippines’ total power generation of 102 TWH in 2020 was what Vietnam generated in 2011, Malaysia in 2005, and Thailand and Indonesia in 2001. We are so behind in power generation compared to our four neighbors in the ASEAN. We need to do two things to catch up with our neighbors, and serve more households and companies especially now that we have liberalized the Public Service Act, a good job by Congress.

One, we need more stable, reliable, and dispatchable power sources and less intermittent sources. Since the Department of Energy was pressured by the climate activists and ESG (environmental, social, and governance) corporate lobbyists to discontinue new coal plants, we must consider nuclear power. At least the small modular reactors (SMRs).

Two, the transmission system must continue fast upgrades. It will cost big money, but the NGCP is earning big money anyway. The ERC and Congress must push the NGCP to do its job as contained in its legislative franchise. New big power plants must be quickly connected to the grid, and to the consumers.
---------------