“Something terribly wrong with a program that grows ever larger even when prosperity for everyone else is increasing. We should measure welfare’s success by how many people leave welfare, not by how many are added.”
— Ronald Reagan, 40th US President

Among the economic phenomena that I am skeptical about is the continued high poverty incidence of the Philippines. I often go to provinces especially in rice farming villages and among the things I notice is that the poor hardly ride animals or bicycles anymore, they ride motorcycles, electric bikes, or buses and vans. Farmers hardly use cows and carabaos to till the farms, they use hand tractors or big tractors. The poor now communicate via e-mails and social media, not slow mails or smoke signal.

I suspect that there is some corruption in the design and measurement of poverty because there is big public money involved in high poverty: multi-billion pesos of continuing loans with WB-ADB; big budget yearly for welfare agencies like DSWD, DepEd, CHEd, DoH; big pork barrel (explicit and implicit) for legislators, national and local governments; big projects for consultants and academics; even big indirect funding for NGOs.

From ADB’s Key Indicators for Asia and the Pacific (KI) 2018, here are some data on poverty (see Table 1). 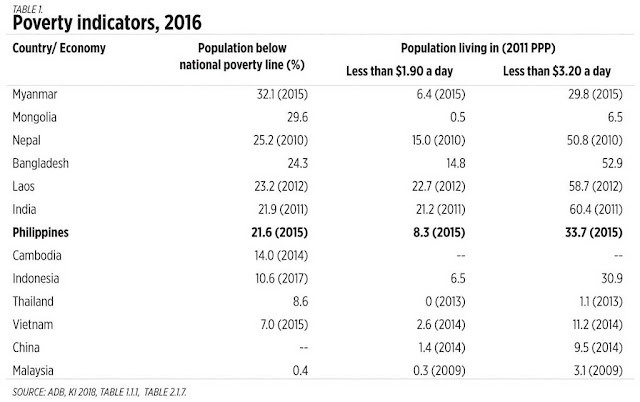 See that the Philippines has higher poverty incidence than Cambodia, Indonesia and Vietnam, and nearly similar as India and Laos? 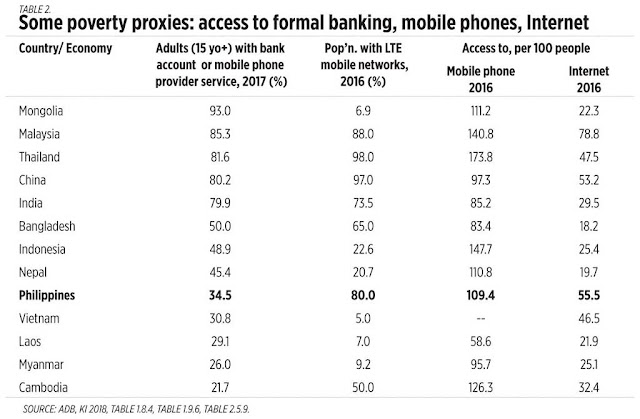 Reagan was right. Any serious, honest and successful welfare, anti-poverty programs by government should result in a decline in the number of the poor and state-dependent, subsidy-seeking people.

What we often have are either dishonest, unsuccessful welfare and anti-poverty programs so that the current poverty incidence is similar to those three decades ago and will remain so two decades from now. Or the programs somehow were successful but implementers, lenders and consultants have invented new schemes so that revised definitions and measurements of poverty always lead to high poverty incidence.

If there is more honesty in reducing poverty, the budget for welfarism, the number of bureaucracies and politicians, the rates of taxes and fees, should flatline and even decline through time. This is hardly happening.

Here is an old anecdote about poverty: