The China economy and people are ok, the China communist government is not. Jack Ma and other Chinese businessmen are fine, Xi Jinping and other top officials of the China Communist Party are not. Sailing in the SCS/WPS under FONOPs is ok, controlling and “owning” that sea is not. Only a communist dictator government would say that they “own and/or control” that sea by stealing territories. And only a dictatorship-leaning PH government will be happy to kowtow to China dictatorship.

When Xi Jingping visited Manila this week, Nov. 20-21, see how President Duterte behaved -- he walked behind Xi, no PH flag behind him while Xi has the CN flag following him. 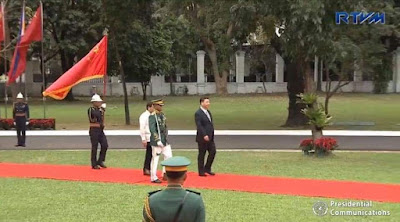 Have a friend from UP in the 80s, Lauro Gamboa, son of former Assemblyman Wilson Gamboa Jr. of Negros Occidental who was a famous anti-Marcos dictatorship legislator. See Lauro's posting last November 21 of which he later tagged me, what a bummer il-logic:

“we lost the shoal to china sa panahon ni AQUINO ... he is so stupid ... kaya nga nagreklamo sya sa HAGUE ...BULLSHIT ang HAGUE na yan ... may ruling nga sila sana to cure the STUPIDITY AT PAGKA-TRAYDOR NI AQUINO ... then what? they cannot even enforce it. Hague is asking the Philippines and DUTERTE to enforce the ruling by going to war with China? ... buti pa gawing pampunas sa pwet ang ruling nila ...”

If his father is still alive, I think he would disown his son Lauro Gamboa. The late Assemblyman Gamboa Sr. was a staunch anti-dictatorship legislator. Now his son supports a government that kowtows to China dictatorship.

China communist govt. bully stole Scarborough. The previous administration has no huge armaments to match those of CN but it has legal weapons to counter it. It used that legal weapon, it brought a case vs CN at the UN PCA, it won. Now Du30 the traitor kowtows to CN, his administration does not and cannot protest the stealing of more territories, bowing to Xi Jinping, the leader of China communist dictatorship.

Lauro and his fellow Du30 supporters asked who will enforce that PCA ruling? Many. The US’ Trump, UK’s May, JP’s Abe, AU’s Morrison, etc ARE enforcing the PCA ruling – that portion of SCS/WPS is international waters, NOT owned or controlled by China communist government. So Trump, Abe, May, Morrison, are correct in sending their battleships and aircraft carriers in that portion of SCS.

Lauro further wrote, “AQUINO who facilitated the occupation of the shoal by China.”
This is a very idiotic statement of course. If he “facilitated” it, why did he go to the UN PCA? On the contrary, he protested it, opposed it, that is why he went to the PCA. Lack of military armaments does not mean a country has zero other option to protest big communist dictator bully governments like CN.

CN govt does not need a Trillanes or anyone else to know that PH has no big military to defend its territorial claims in SCS/WPS. Even a grade schooler in CN and PH would know that. But what CN did not know was that the PH under the previous administration has assembled a strong, intelligent legal team when it went to the UN PCA. So CN communists did not know that the PH has a chance of winning there and it won.

This is treason, verbal surrender by a President of a country.

"China is already in possession (of the South China Sea). It's now in their hands. So why do you have to create frictions… that will prompt a response from China?" -- Duterte.

Duterte followers do not find this idiotic and treason? ONLY the CN Communist government + Du30 communist lover say that CN controls and possesses that area. The UN PCA, the US, UK, AU, JP, other governments do NOT recognize CN possession of that area. Go Trump, Go May, Abe, Morrison, send your battleships to that area under FONOPs.
----------------