“Every Man has a Property in his own Person. This no Body has any Right to but himself. The Labour of his Body, and the Work of his Hands, we may say are properly his.”
— John Locke, Two Treatises of Government (1689)

Such private ownership apply to both physical and nonphysical or intellectual property, the latter including trademark and brand, patent on inventions, copyright on compositions, and trade secret. 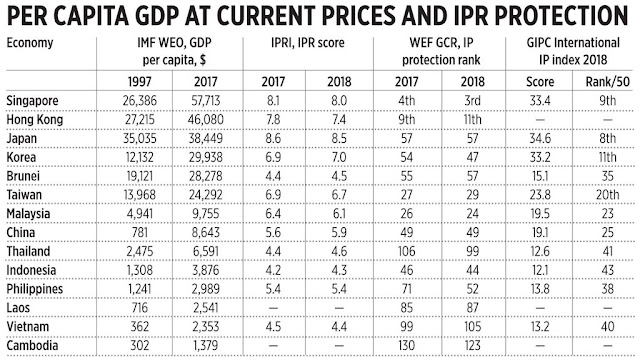 Now there are IPR-busting policies in several governments like plain packaging for tobacco products. Australia was the first country in the world to do it in 2012, and in the ASEAN Thailand wants to do it too.

Plain packaging (PP) is a ban on branding, it removes trademark, certain graphics, colors and logo, and allows only a generic name in a standard font/size with graphic warnings. And this is where the danger lies.

Corporate branding is elaborate and complicated, the bar codes can even show where the product was manufactured and when. By removing corporate branding via PP, generic branding is less complicated, less elaborate, and very easy to copy and reproduce by illegal producers and smugglers. Since these smugglers did not invest decades of business developing their brand, they can sell at a much cheaper price. And this will attract more smokers, more smoking, not less.

IPR issues like forced technology transfer and outright IPR robbery are among the thorny issues in the ongoing US-China mild “trade war.” The US says its companies are losing as much as $600 billion per year via piracy, counterfeits, imitations, trademark infringement and other IPR robbery, but China denies it.

Health socialists and activists who hate tobacco, alcohol, soda, confectionery companies and their products should realize that both nature and the market hate a vacuum. Remove the legal products and demonize their manufacturers, and that gives room for smugglers, criminal gangs and terrorist organizations to produce and sell their own fake, substandard but cheap products. This results are more smuggling and corruption, more smoking and drinking, not less.
--------------