I belong to a small club, the Rotary Club of Taguig Fort Bonifacio of RI District 3830 and we do not have much community projects. But my District Governor when I was a Club President in RY 2006-07, Past District Governor (PDG) Rafael "Butch" Francisco, has a kind heart for our less privileged countrymen. 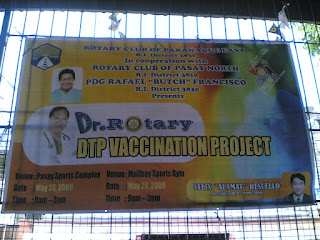 Yesterday, PDG Butch celebrated his birthday, May 23, among several thousand children 4-6 years old and their parents (mostly mothers), in Dipteria-Tetanus-Pertusis (DTP) vaccination project. It was held in Pasay Sports Plaza. I wasn’t there yesterday, but this morning, May 24, I attended the 2nd day of the activity. It was held in Malibay Sports Gym, also in Pasay.

The two-days activity was jointly sponsored by the Rotary Club of Pasay North, D3810, and Rotary Club of Paranaque East (RCPE), D3830. Funding for this rather expensive but worthy project mainly came from PAGCOR, Where PDG Butch is the President, in coordination with VAXEN, a young but big distributor of vaccines in the country. Other rotary clubs from D3830 also pitched in various support like food and drinks for the hundred-plus people involved in the 2-days activity.

The Pasay City government also extended support by mobilizing the city health and social welfare departments, their staff moving house to house to distribute pre-registration forms for families with children 4-6 years old. I think this is an efficient system. First, only parents or guardians of children 4-6 years will be given the registration form, and only the targeted beneficiaries, Pasay residents, will be served. Well if the sponsors bought vaccines for 4,000 children and 10,000 will come from various cities, then you will have logistical nightmares and thousands of disgruntled parents and guardians who will say more bad things than good about Rotary. 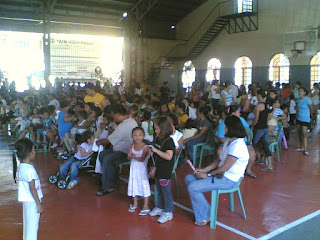 When I arrived at Malibay Sports Gym a little past 9am, there were hundreds of parents with their respective children already. I immediately went to Gov. Butch to greet him a (belated) happy birthday. As time goes, more parents with their toddlers were coming.

PP Rene Aquino of RCPE served as the MC. He briefly introduced what the project is all about, and what the vaccines can do for their children. The parents/guardians and their toddlers happily greeted Gov. Butch on his worthy birthday project. 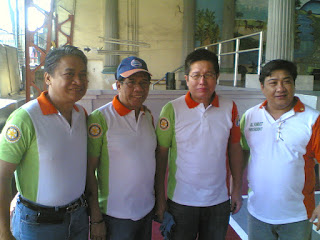 Then the vaccination started. A long line of eager parents who will save some P1,000 for the vaccine if purchased in commercial clinics, was formed. There were 4 tables with 2 health personnel in each table, so 8 toddlers can be served at the same time. And this is where “children’s drama” unfurled.

Although about 70 percent of the children did not cry during the “injection”, a portion of the 30 percent who cried really cried wildly! I surmised they were already crying and resisting while queuing, and their screaming was directly proportional to their distance to the attending health personnel holding the syringe. That is, 2 meters away, the cries were loud. When they were face to face with the health staff, they were screaming to the top of their lungs, really huge teardrops, waggling and kicking, and looking at the health personnel as if the latter are the most evil persons on Earth!

Since I was finding out how I can help since the city welfare staff are in charge of making the long lines in order, I just went to those children who cried the loudest. I did not intend to pacify them because I knew they won’t listen to me since they do not know me, so I went to hold their waggling and kicking feet! When the “injection” is over – usually in just about 3 seconds – these children were wondering if all their resistance was worth the very brief pain of the needle. I was kidding their mothers or guardians, “mas mahaba pa ang iyak kesa injection ah”, to which they nodded smiling or laughing. 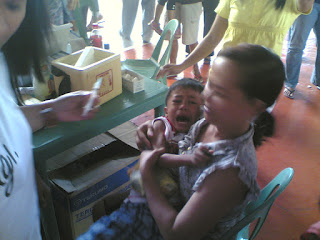 PDG Butch was walking around distributing lollipop candy to children who finish the “injection”. By that time, even those who cried wildly were already pacified. The parents were obviously very happy – you can see it in their eyes and smiles – that their toddlers now have protection against those 3 dangerous diseases. 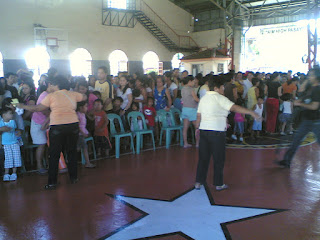 With the quick and systematic vaccination process, the vaccination was over in about an hour covering several hundred, or perhaps a thousand, children. But the team did not leave since there were still other parents with their toddlers coming. They will wait and do their work until 3pm today, the designated closing time. I heard that the volume of children yesterday was much larger than today.

Projects like this makes you proud of being a Rotarian. When I got out of the sports gym, I realized I needed a haircut. Ahh, there’s a barber shop nearby...
Posted by Bienvenido Oplas Jr at 3:58 PM