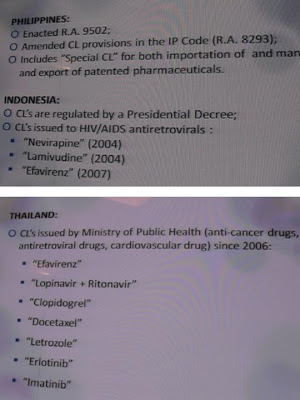 On Day 1, Mr. Epifanio Evasco of the Bureau of Patents, Intellectual Property Office (IPO) spoke about IPR and medicines. He showed cases of CL and special CL policy in the Philippines via the Cheaper Medicines Law or RA 9502. Then the imposition of CL for 3 molecules for HIV antiretrovirals (ARVs) in Indonesia -- Neviraphine, Larmivudine, and Efavirenz.

Thailand has seven drugs put under CL covering drugs against hypertension, HIV and some types of cancer. 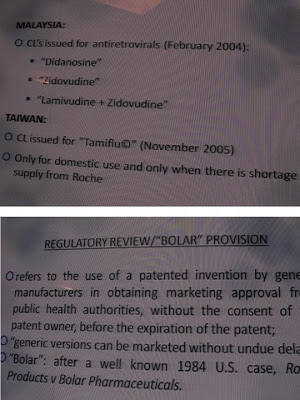 Malaysia put 3 anti-HIV drugs under CL while Taiwan imposed CL only on Tamiflu, I think that was during the SARS epidemics which started in China. I think there were also instances of CL imposition in China and Vietnam, Mr. Evasco did not mention them.

He mentioned also that RA 9502 has provisions for "Exhaustion of rights" (Art 6 of TRIPS) which is directly linked to "parallel importation". Note that this term is different from ordinary importation. Then there is also the "Research exemption" provision in the law, which allows researchers to use a patented invention like a new drug for experimental or educational purpose.

The "Bolar Provision" or "early working" would allow (mostly local) generic manufacturers to develop a patented drug without the consent of the patent holder. Once the molecule patent expires, the generic producers can instantly market and sell their own branded generics. 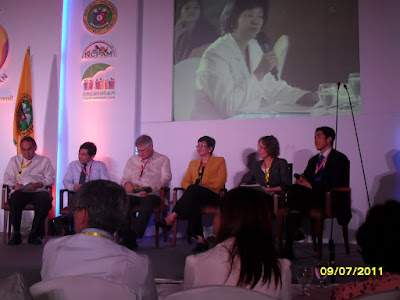 Mr. Evasco left most, and Ms. Catherina Timmermans of WHO (2nd from right) were the two speakers that day who touched on IPR and medicines.

Ms. Timmerman's presentation was entitled "Priority Medicines, Essential Medicines for Non-Communioable Diseases". That should be a prelude to the big UN and WHO summit in NYC to control NCDs last September 19-21. One may wonder, why would the UN and many national governments impose more "government responsibility" in healthcare when the decision to over-drink, over-smoke, over-eat, over-sit or not, is mainly personal decision and responsibility. 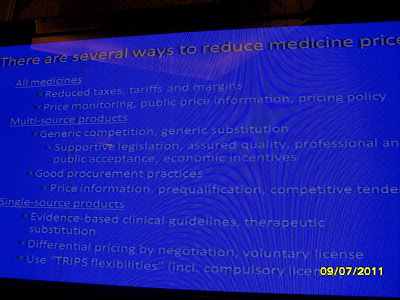 Anyway, it was good that Ms. Timmermans mentioned the contribution of government taxes and fees to expensive medicines. 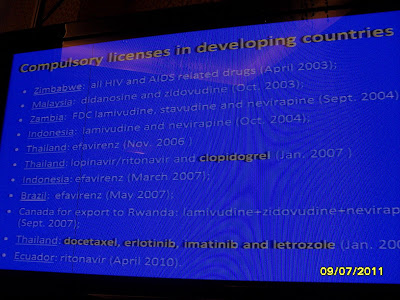 Here'a long list of developing countries which imposed CL: Zambia and Zimbabwe, Malaysia-Indonesia-Thailand, Brazil and Ecuador, between 2003 to 2010.

This list of course is not complete, There should be instances of CL declaration in other countries like India, Pakistan, Ghana, etc. 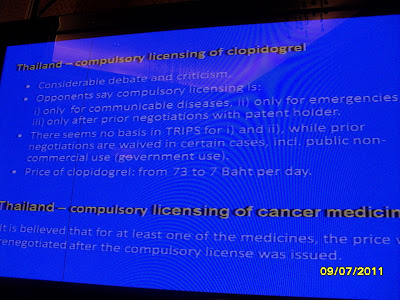 Here is an interesting case of CL in Thailand against Clopidogrel molecule (anti-blood clot, anti-vascular diseases; in short, against non-communicable or non-infectious diseases).

With the modernization of food (and beverage, tobacco) production and marketing, modernization in people's lifestyle -- they tend to eat more fatty food, gulp more fatty drinks, socialize with friends with more cigarettes, beer and wine -- the development of non-communicable diseases also rise among the people. But this is on top of rising or longer lifespan. Before, people were dying of hunger and lack of food. Now, many people are dying because of too many food and drinks.

If developers of modern drugs that address NCDs are to be demonized as "hungry multinational capitalists who suck sweat and blood from the patients", then who will develop those new drugs and still escape being demonized as such?

The WHO (and many governments) has that ideological baggage of being a silent or implicit anti-innovation, anti-competitive capitalism bias. This could be the main reason why the WHO is always in the forefront of exaggerating certain diseases (before, they exaggerated the threat of HIV, then SARS, H1N1, now the NCDs) as they get more budget and funding from national governments.
Posted by Bienvenido Oplas Jr at 11:29 AM