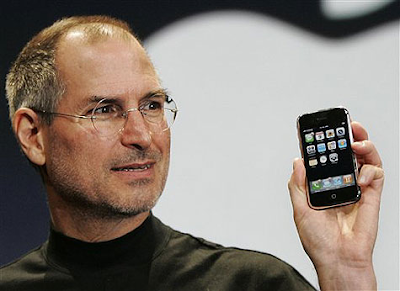 Although I remain poor enough not to purchase any of your products -- not an iPhone, nor an iPad, much less a Mac laptop (well, my wife once gave me an iPod as her Christmas gift to me a few years back) -- I am a great fan of Apple products. I really hope to get one of those stuff in the coming months.

There is one good posting in facebook from the head of the Ayn Rand Institute about the man, I copy-paste below.

Ayn Rand's Atlas Shrugged lionizes the great wealth creators--the men and women whose thought, creativity, and drive has lifted mankind from the cave to the glistening skyscrapers of New York City. As the president of the Ayn Rand Institute, I regularly speak about Atlas and there is one living person who, more than anyone else, I reference as embodying those traits: Steve Jobs. The news that Jobs is no longer with us leaves me truly heartbroken.

What Jobs has always represented to me is someone who devoted his life to creating great values--who pursued his own vision, his own dreams, his own happiness. The results of his life's work are truly astounding: the Apple II, the Macintosh, Pixar, the iPod, iTunes, the iPhone, the iPad, and much, much more. He set out to change the world. He succeeded, and by all accounts took deep joy in his career and his achievements. He deserved it.

Ever since I heard the news that Steve Jobs died, a certain passage from Atlas Shrugged keeps running through my head, although only readers of the novel will understand the full impact of the scene.

Toward the end of the novel, when heroine Dagny Taggart is reunited with several men she had thought she would never see again, she says that the meeting is like a childhood dream "when you think that some day, in heaven, you will see those great departed men whom you had not seen on earth, and you choose, from all the past centuries, the great men you would like to meet."

One of the men replies: "And if you met those great men in heaven…. There's something you'd want to hear from them. [Y]ou'd want them to look at you and to say, 'Well done.' … All right, then. Well done, Dagny!"

If there were a heaven, filled with the great men of history, I have no doubt that they would say, "Well done, Steve Jobs."

Meanwhile, ICT and telecom innovation succeeds with little politics. There are debates about the role or mis-role of patents and IPR in the software and computer world, something which I do not follow close enough.

A minor concern on Steve's death is on medicine innovation, finding that revolutionary medicine or vaccine against pancreatic cancer, the disease that killed Mr. Jobs. It seems to be not catching up much in relation to the demand of patients like Steve, due to heavy politics and multiple government regulations in many countries, like IPR-busting policies and drug price control.

At 56, Mr. Jobs should have lived longer. His restless and highly innovative mind is needed by the world more than ever. It is true that he has packed Apple with many bright and equally innovative minds too like his successor, Mr. Cook. But still, the presence of the founder, the father, the icon of Apple innovation, would have been more desirable.

Rest in Peace.
Posted by Bienvenido Oplas Jr at 3:25 AM