As I argued in my earlier discussions on the subject, I do not support population control, aka RH bill. Proponents and supporters are saying that there is nothing in the bill that says "control population", but if you look at the explanatory notes of those bills, they are quite explicit in saying that a fast population growth for the nearly 100 million Philippine population is bad. Hence, such fast growth should be controlled through various policies inputed in the RH bill.

The only people who have zero option are the taxpayers who will ultimately shoulder all those endless subsidies, whether they support those programs or not. Basta bayad lang ng bayad.

When there are big celebrations -- like people power revolution, big motorcades and greeters for Pacman Pacquiao after another successful boxing match, texting capital of the world, 2nd biggest facebook nation in the world, etc., big population is cool and acceptable.

Governments should not subsidize personal irresponsibility, like people who have explicitly and willingly chosen poverty via laziness, alcoholism, gambling, beerhousing, over-spending, etc. For this group of people, let poverty teach them a lesson.


I suggest a simple experiment... post an ad for a driver or a janitor, then ask them how many siblings they have... chances are the answers would range from 5 to 10... people still have freedom of choice, so they can very well ignore government-sponsored birth control. But I believe "accessible and affordable" birth control should be available out there as an option...

I think many middle class and rich Filipinos, as well as expats here, including those who vocally support population control, are beneficiaries of "excess population" of those drivers, janitors, nannies, gardeners, etc. Where else in the world can they get nannies for their kids at only P3k or P5k per month and still take care of their kids with maternal care and concern? Or family drivers for P8k to P12k a month who work from morning to late evening?

I see here in Makati and other cities in Metro Manila, many poor people who prefer not to line up to beg for politicians' and city hall's dole outs, and instead work hard on their own as bar-b-q or fishball or buko vendors. And the city hall truck and employees chase them from time to time, confiscate their kart and wares because they do not have the required permits and signatures of city hall bureaucrats. The poor want to feed their family on their own, government comes in to demand lots of taxes and bureaucracies.

Government should instead run after thieves, rapists, killers, drug pushers, extortionists, land grabbers, corrupt officials, etc. So many work that government should do which they don't do, then blame the poor and control the population of the poor.

My friend followed up another point:


The oversupply in labor is much greater for "unskilled" ones, so the wage rate settles at a low level. When their supply is reduced (like in Europe and the US), then their wage rates will rise to meet demand.

However, in the current set-up where there is still oversupply, which do you think is more efficient for government to do:

1. keep addressing the educational (and nutritional needs) of all needy schoolchildren for 12 years, or
2. make birth control available so that the potential excess labor of the future are not tempted to become thieves, mercenaries, drug pushers?

I posted my argument earlier of what government should do. In brief:

If some poor people would remain lazy or drunkards or incorrigible gamblers or what have you, government should step back. Do not subsidize their personal irresponsibility.

If some poor people would become hard working and ambitious, government should also step back. Do not penalize entrepreneurship and impose various taxes, fees and business bureaucracies.

If some poor (and rich) people will steal or engage in kidnapping, carnapping, human trafficking, extortion, etc., that is where government should come in. Give them hell, chase them, imprison them.

Birth control items like pills and condoms are not that expensive. What prevents the supporters of RH bill to pitch in their own money and donate those things to the poor? Why do it via government which involves more bureaucracies, more taxes, more monitoring and more politics?

Imagine right now, because of the Filipino diaspora, Filipinos are supposedly holding the record of being in the most number of countries all over the world. Wow, there is a Pinoy in every corner of the globe. Why not? Imagine what that would do to our exports of patis, bagoong, dried mangoes.

If we keep this up, we could just send millions of people to the Spratlys and that should do the trick.

Let's bat for more Filipinos. Down with the RH bill! 1.2 billion Pinoys or bust!

I think my friend did not see some studies that China's population is projected to be DECLINING starting this decade. See two charts here, Responsible parenthood cannot be legislated, Part 3.

We don't read or hear it often, but kidnapping of women in China is a big issue as they don't have enough women. The BIG Commie government of China centrally planned population and couples have planned on getting only a boy, not a girl, as their only child.

That is why population control, aka RH bill, is wrong. Why do supporters of population or birth control not use their own resources to implement what they want? Why use the government and its coercive power to implement what they themselves can do? Why coerce and force every taxpayer in this country, including those who explicitly do not believe in it, to finance that bill?

Meanwhile, here are some news reports of population alarmism, no different from climate alarmism, from Dr. Paul Ehrlich, a biologist from Stanford U. He should be next to Thomas Malthus in propagating global population scare. These news reports in Decenber 1967 (left) and March 1972 (right). 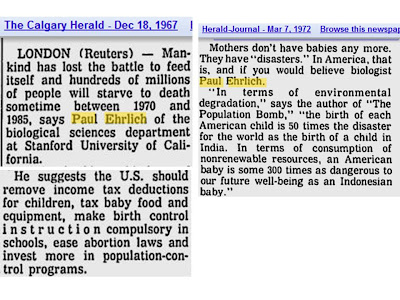 And here's another scary idea from the guy, this news was from The Australian Women's Weekly, July 28, 1971. See here -- 10 to 20 million people starving to death each year, can you believe that? 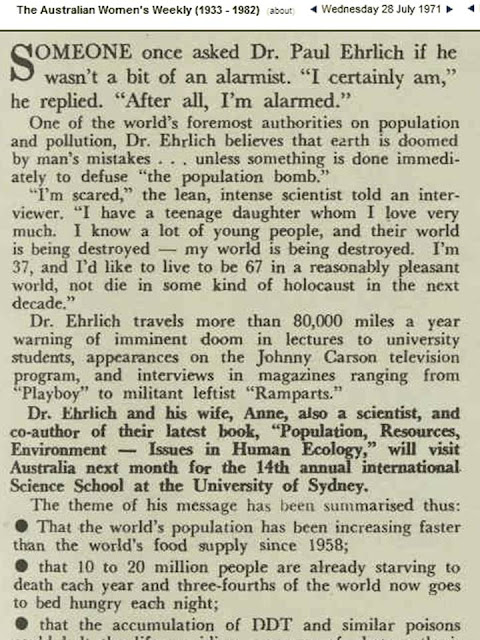 Finally, see these two news reports in April 1990 -- Each American causing 1,000x more destruction to the planet than average persons in Earth.... that planet Earth's capacity can only support 5.3 billion people 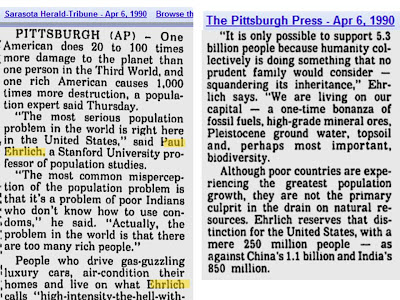 These news clippings h/t to the old www.stevengoddard.wordpress.com blog.


More than 40 years have passed, ALL of Ehrlich's predictions and alarmism were proven to be wrong.
So if we extrapolate what will happen 40 years from now, it would be safe to say that all the scary scenarios painted by the modern day alarmists today will be proven wrong. Why?
People are assets. If there's a problem, there's a solution. If there's not enough land for houses, no worries, just build 40 or 60 storeys residential condos. If there's not enough road, build more interchanges, skyways, tunnels. If there's not enough food, have more biotech, more molecular biology in food production. If there are too much CO2 emission, no worries, plants and crops and trees love CO2, they grow faster, food production increases. Besides, CO2 is never, was never, and will never, be the main determinant of the planet's climate cycles of warming-cooling-warming-cooling. Look up at the Sun and the GCRs, they determine whether there will be more clouds or less, more rains and flood or less, more snow or less.
----