Guys, prepare for even deeper and longer global cooling. Click on these graphs to see their larger images. 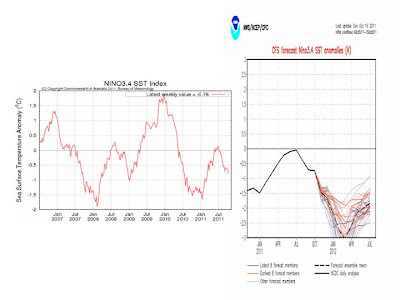 Graph on the left, sea surface temperature (SST) anomaly for Nino Region 3.4 of equatorial Pacific Ocean, actual anomaly from 2006-2011. Graph on the right is both actual and projections (black dotted line) for Nino 3.4, from mid-October 2011 to July 2012.

There are two bad news here, especially for the peddlers of "more man-made global warming/climate change" stupidity. One, the current La Nina and global cooling will be longer than the 2007-2008 global cooling was only about 1 1/2 years and it was already bad. The current cooling, started in May 2010, might last through end-2012 (or 2 1/2 years) or even longer. And two, the cooling will be even deeper, up to -3 C drop compared to the average temperature. 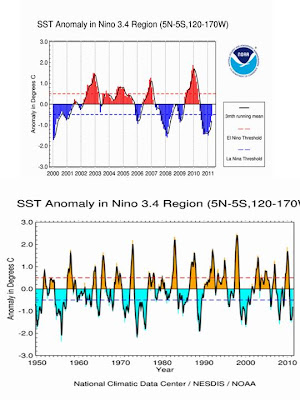 Upper graph is SST anomaly in Nino 3.4 from 2000-2011 (12 years). See the up-down-up-down cycle of temperature anomaly in the planet's biggest ocean and biggest receiver of solar energy everyday.

Lower graph is from 1950-2011 (62 years). Source of the above graphs are from WUWT's ENSO page. Check that page, ALL data and graphs, zero discussion or interpretation. Make your own interpretation and conclusions. There are other important reference pages in that website, like sea ice (Arctic and Antarctica), solar energy and geomagnetic field indexes, and so on. 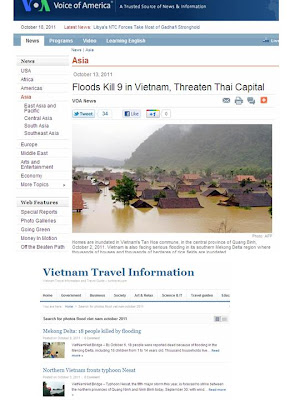 Vietnam, Cambodia, Thailand, other neighbors of the Philippines were not spared of the heavy rains and flooding. Rather scary pictures and news reports about the extent of flooding and casualty in Vietnam last month alone.

I have briefly discussed and showed photos of the recent flooding in the Philippines, Typhoon Nesat ("Pedring") in pictures, September 28, 2011. Check also photos of Thailand flooding, October 2011, October 15, 2011 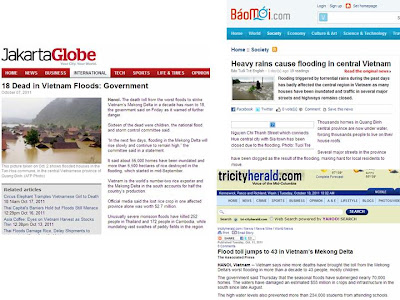 So it is rather idiotic to hear some warming leaders proclaiming that those heavy flooding are "proof of man-made warming and climate change." Warming will cause less rain and more rain?

The above graphs show that people should expect rising rivers, rising lakes, NOT rising ocean. Notorious climate liars like the WWF and Greenpeace keep fooling the public -- and get more money from them.

Update: Just now, I read an article from the NYT today. 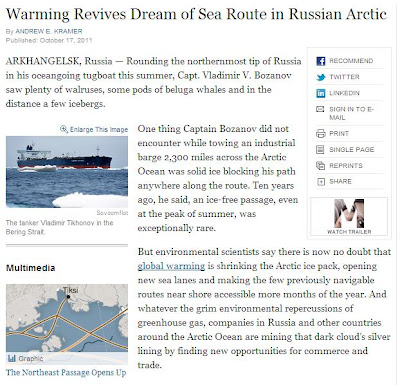 Really? Sure? There are less ice in the Arctic so that ships can soon navigate an "ice free" Arctic?

Climate alarmism in media is among the most notorious peddlers of climate stupidy. The New York Times included. See this satellite picture and graph below. 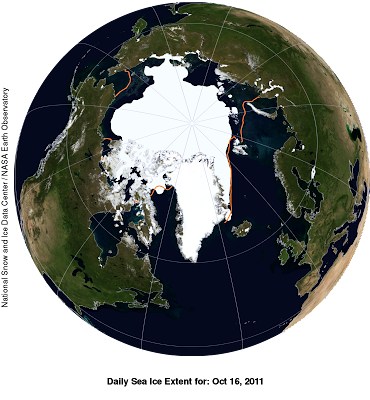 Satellite picture of the Arctic ice as of two days ago, October 16. Wide ice that covers almost the whole of Greenland, portions of Canada, Alaska, Norway, other places.

And how big is this ice as of this week? 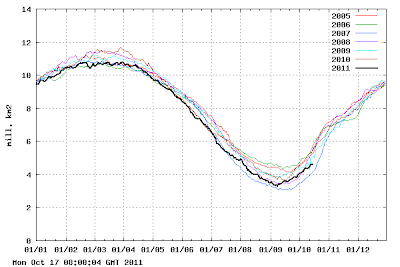 About 4.5 million sq. kms., or about 15x the total land area of the Philippines (0.3 million sq.kms.) or about 8x the size of France (0.64 M sq. kms.) or about 6x that of combined area of Germany and Japan. And the ice will keep growing in the coming months.

Hogwash and garbage in climate stupidity is everywhere. Yeah.
-------

Climate stupidity 19: More severe typhoons are due to global warming, October 07, 2011
Posted by Bienvenido Oplas Jr at 10:47 AM