At first there was this picture in the facebook wall of the Department of Public Works and Highways (DPWH), one of the most notorious for corruption agencies in the Philippine government. This was sometime September 27, 2011, about the visit of 3 high DPWH officials of the battered seawall of Roxas Blvd. after typhoon Nesat (or "Pedring" local name) last week. 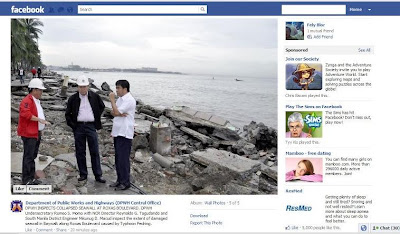 Then an engineer-blogger, Pierre Albert San Diego made an analysis of the photo in his blog post, DPWH Photoshop Fail because he immediately noticed that there was something wrong with the photo. 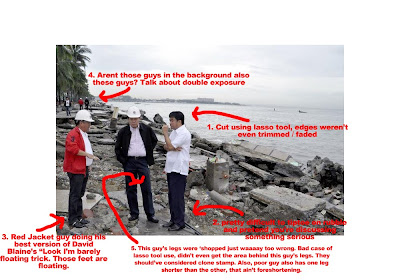 The author concluded his paper with this,

Some say this is a very minor issue, but I see this as a nice sample of DPWH’s lack of integrity. If they can fabricate simple things like this, just imagine what these guys can do to progress billings and acceptance of projects. Also, while relatively mild, isn’t this a classic example of “Utak Wangwang?” While unethical and unnecessary, they thought they could get away with fabricating photos so they tried to.

Amen. And since then, the failed photoshop has become sort of "viral". DPWH officials later apologized for misleading the public -- because they were caught. And so the picture of the 3 officials have also gone to different places. These photos I took from various sources. 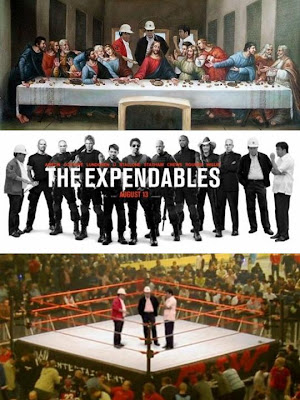 And they are also part of Stallone's team of The Expendables.

Jim Ayson posted more photos in his blog post, The Great DPWH Photoshop Meme Kicks Into Overdrive, where many of the photos here were lifted. 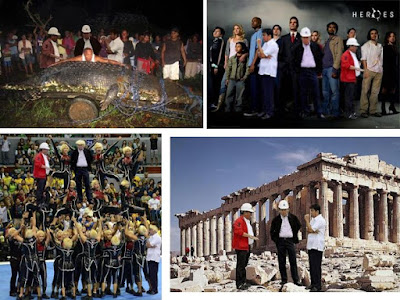 The three officials were also seen behind the DPWH's younger sibling, a giant crocodile caught in Agusan province a few weeks ago.

They were also sighted in the ruins somewhere in Europe, and the UP Pep Squad, the champions in the UAAP competition. 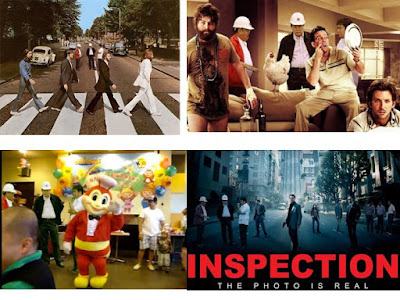 My golly, they also joined the Beatles when the band members were still young, hahaha.

A party with Jollibee, and in the shooting of The Inspection.

Wonder when the real photoshop geeks will stop with their funny imagination? 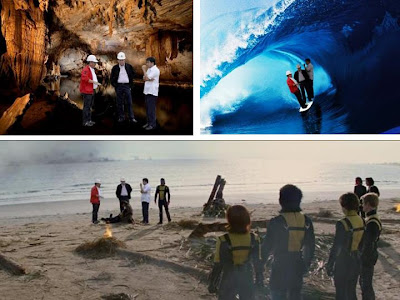 From the caves -- is this in Callao cave in Cagayan, or in Bohol or somewhere else... to the waves -- in Hawaii or Siargao in Surigao del Norte?

Wait, wait, don't disturb... they are meeting the young saviors of the planet :-)

I'm no geek in photoshop, I haven't done even one photo using that software, but I want to join the fray, how? 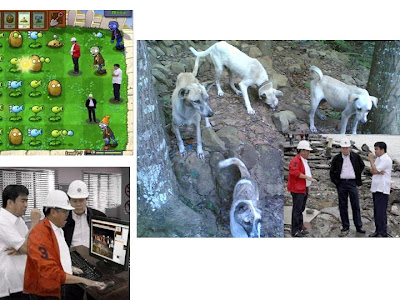 I only know copy-and-paste in powerpoint and jpg.

Here is a picture of some of our dogs in the farm more than a year ago. Two of my dogs were looking angrily at them... :-) 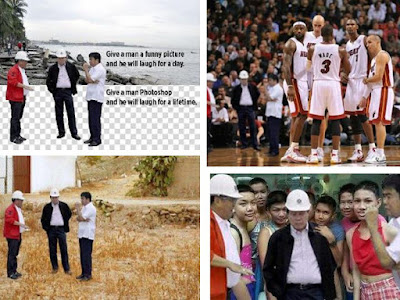 Lots of new photos are cropping up at the fb page, DPWHERE?

Photo lower left is famous, "Find the cat". Clue: it's on the upper right side of the picture... 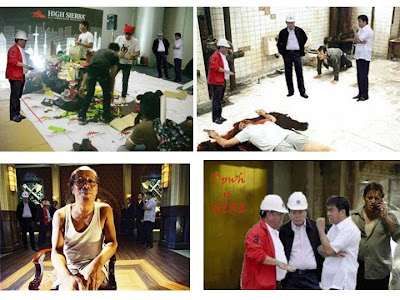 This time, the Public Works officials have become crime investigators... 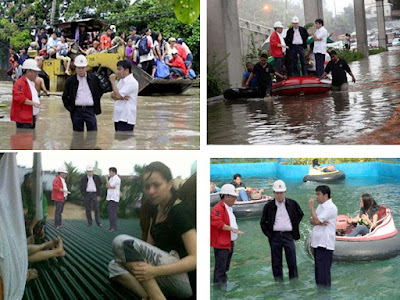 From DPWH officials to boatmen and flood rescuers :-) 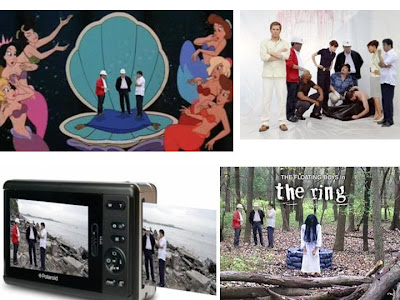 And earthlings who joined the mermaids down under.

Or the new explorers of The Ring....

Facebook records the date/time of all its entries. Reviewing these date/time records on the Department of Public Works and Highways (DPWH Central Office) FB account will show attempts of cover-up. Consider the following:-

12:12 pm, Sept 28, 2011 - Based on the screen shot in the 2011/09/28/dpwh-photoshop-fail blog of Pierre Albert San Diego, the DPWH FB posted a picture showing 3 DPWH officials with the caption “DPWH INSPECTS COLLAPSED SEAWALL AT ROXAS BOULEVARD. DPWH Undersecretary Romeo S. Momo with NCR Director Reynaldo G. Tagudando and South Manila District Engineer Mikunug D. Macud inspect the extent of damaged seawall in Baywalk along Roxas Boulevard caused by Typhoon Pedring.” Pierre in that blog pointed out discrepancies in the picture that clearly showed the picture was “photoshopped”.

12:29 pm, Sept 28, 2011 - DPWH deleted that post replacing it with a picture of two DPHW officials in Roxas Blvd. The picture carries the original caption of the deleted photo where 3 names were mentioned. But the photo shows only 2 people, the one with the red jacket is missing. The one in white polo barong now wears a hard hat when in the former picture, his head was bare. A number of remarks flooded the Internet regarding this new picture, some saying that this is also doctored.

8:20 pm, Sept 29, 2011 - the DPWH FB posted another picture with the same caption as above. This picture showed the 3 DPWH officials as in the original (deleted) photo. While in that photo Manila Bay was on the RIGHT side of the picture frame, this “official” photo shows the bay on the LEFT side.

9:37 pm, Sept 29, 2011 – DPWH public relations officer Andro Santiago told Inquirer.net that the original photo had been posted by mistake, adding that the minute they realized the mistake, they immediately replaced it with the official photo release. “After about two minutes, the photo was deleted. The official photo release was posted,” said Santiago, stressing that the official photo was genuine and “Photoshop was not used (the picture was not retouched)”. Yet, FB records show that the second photo (which was questionable) was posted around 20 minutes after the first and the third photo very much later by around 32 hours.

1. Why did it take 32 hours for the “official” picture to come out, if it was available during the original posting?
2. Where is the original photo that was the source of the “failed photoshop”? When this happened in China, the authorities simply published the original “un-photoshop” picture with a public apology. Why couldn’t the DPWH do the same?
3. Could it be that the original photo did not actually occur and was “photoshopped” to show 3 DPWH officials when in fact there were only two in the scene?
4. Did the 32 hours mysterious gap between the original picture and the “official” photo gave chance for the 3 DPWH officials to “stage” a photo session so that the “photoshopped” picture can now be realized and they can claim that the picture was not retouched, except that they forgot to put Manila Bay at the RIGHT side of the picture frame?
5. If this is the case, which is the bigger sin, the “photoshopped” picture done by some staff in DPWH, or the “staged” photo session done by the DPWH officials?

Thanks EliRioJr. The DPWH has a long image of being highly corrupt, sort of "highway robbers". They should be careful therefore, not to aggravate this bad public perception of them. But from what happened, the image of dishonesty on the part of Department officials is exacerbated. Wake up DPWH.

Lol I've seen this fictional photos on televisions too. :D