BWorld 110, Should we go federal or not?

Whether to move from devolved unitary to a formal federal state, this is among the big political questions in the Philippines today. There are two related questions here: (1) If federalism is the answer, what is the question? (2) if federalism is not the answer, is a reformed devolution the solution?

The first question I borrowed from a big forum several months ago from my alma mater, the UP School of Economics. The second question is my reformulation of the arguments by the anti-federalists.

By definition, federal states are those whose national governments share power with semi-independent or semi-autonomous regional or provincial governments.

To further contextualize the national debate, let us view some global data about federal states compared to non-federal states. 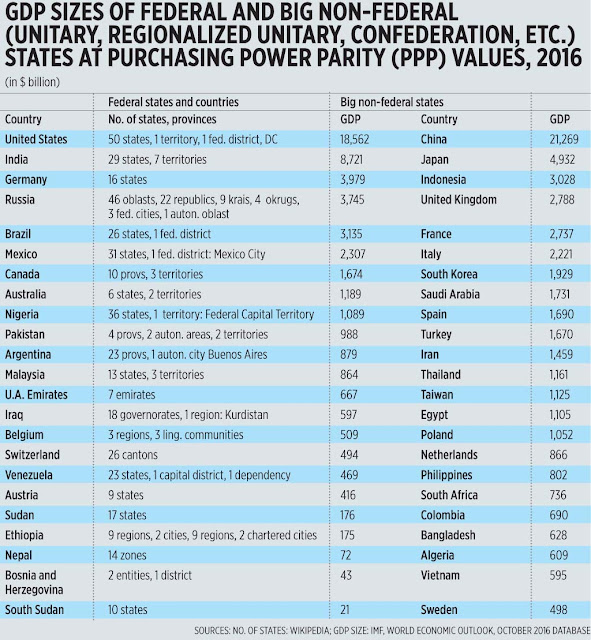 Other federal states and economies that are too small (GDP size less than $1B) and not included in the list are Saint Kitts and Nevis, Comoros, and Micronesia. 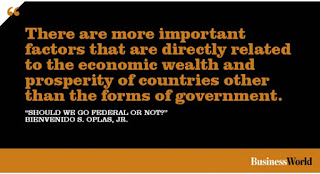 So the promise of “more development if we go federal” is highly questionable. There are more important factors that are directly related to the economic wealth and prosperity of countries other than the forms of government like federalism vs. unitary, presidential vs. parliamentary, centralized/socialist vs. decentralized. And those factors always include the rule of law, the sanctity and respect for laws, laws that apply to both rulers and ruled, to both governors and governed.

A debate on federalism will take place on Feb. 2 at Vivere Hotel, Alabang. It is organized by the Rotary Club of Muntinlupa North, PCCI-Muntinlupa, both presided by Ms. Elvie Sanchez-Quiazon, and the Muntinlupa City government.

The generally pro-federalism speakers will be Dean Pacifico Agabin of UP Law Center and Jonathan Malaya of PDP. The generally anti-federalism speakers will be Ambassador Hermenegildo Cruz, Prof. Gene Pilapil of UP Political Science Dept., and Solicitor General Florin Hilbay. Dean Ronald Mendoza of the Ateneo School of Government will also speak but he considers himself as more on the listening mode than being identified as pro- or anti-federalism.

I will be there as one of two reactors. This role is cut out for me because I am agnostic about the issue, so I can listen more to the two camps with no personal bias.

My bias is towards disintegration of huge countries -- huge population, huge land area -- into newer countries, to accommodate competing cultures and political and religious beliefs.

Consider Brunei with only 0.4M people, Maldives with only 0.5M, and Bhutan with only 0.8M people. They are fine as countries, they have their own currencies, tax system, national governments, international airports, etc.

Contrast with huge countries like China, India, Russia, USA, Brazil, Indonesia, Mexico and the Philippines. The US in particular and its 320M people remain heavily divided for many months now over the Trump candidacy and presidency. The idea of initiating a secession of their states from the US like the California exit (“Calexit”) was revived again by some quarters.

Bienvenido S. Oplas, Jr. is the head of Minimal Government Thinkers and a Fellow of SEANET. Both institutes are members of EFN Asia.
--------------

Email ThisBlogThis!Share to TwitterShare to FacebookShare to Pinterest
Labels: federalism, rule of law