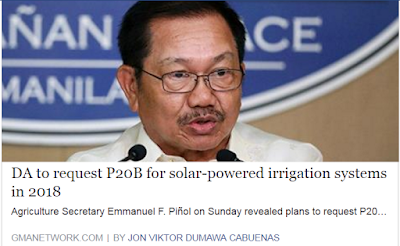 This news report today caught my attention. It smells like a huge racket and waste. On average, it takes 1.5 to 2 hectares of land to install 1 MW (or 1,000 kW) solar capacity, of which only around 180 kW of actual electricity output because of low capacity factor, only 18%.

So DA plans to convert some rice land into solar farms to generate very little solar power? Lousy. And P20 B of taxpayers money for solar? Very similar to $500 M ADB loan (nearly P20 B) for 100,000 e-tricycles nationwide, which new DOE Sec. Cusi later has junked and saved future taxpayers of another source of huge public debt.

Pumping water from below the ground is energy intensive, you normally need a big and powerful water pump to draw water from below the surface. And solar is very intermittent. Power output is fluctuating by seconds, or by minute at least. Just a band of clouds passing by can significantly bring down solar output. Without a battery or voltage regulator or similar instruments, power fluctuation from a solar is a perfect formula to damage and shorten the lifespan of an appliance or an engine. 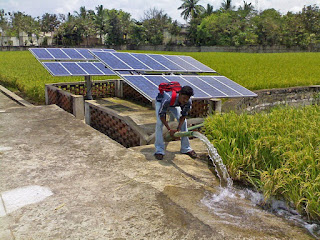 A friend posted this photo of solar irrigation. It seems a no-brainer. Irrigation water level is almost at same level as the rice field, then very little energy would be needed to divert the water. The quicker, less costly option is to raise the dam's or water impounding's height to divert the water anywhere you want it to go.

I think about 90% of all irrigation system in the country use surface water via dams, small and big.

Farmers economize on land space. That is why the pathway between the plots is narrow, only single file of people can walk. Now the DA's plan is to allocate a big area for solar farm. Again, 1.5 to 2 hectares/1 MW of solar installed cap, and actual electricity output is 180 kW, for 2 hectares of solar farm. Wasteful use of land.

The best, most economical irrigation system is to use surface water, not underground water, via dams and water impounding projects. Have more dams, more water impounding, let the law of gravity work on the water, little or zero need for electricity or irrigation pump/engine or solar.

Every year, every single year, zero exception, the problem of many people in the country is too much water, too much flood, water is not a problem. The problem is that huge volume of water is not stored and impounded, they quickly go down as flash flood and wreak havoc downstream.

For P20B in a single year, that can create many small and medium-size dams nationwide.

When I posted this in my fb wall, a number of strangers came and commented on my wall. Some of them do not like public criticism of public pronouncements of public officials who intend to use public tax money. For them, people should just say "amen" and accept the tax-tax-tax policy of the government to fund even idiotic proposals.

If the news headline is "DA to request P20B for more dams and water impounding projects in 2018", I would clap it, applaud it. There are at least 3 advantages of this option: (1) reduce flash flooding during the rainy days and months, (2) release some water when the rains have stopped, (3) have small fishery area or swimming pool for the locals. No need to pump water from below the ground because surface water is too much, too many floods during the moonsoon and typhoon season.

Back in 2004, I saw some of Japan's mountains from a plane, I saw one river with about 7 dams on various levels; another river in another mountain which have about 5-6 dams, and so on. So during heavy rains, potential flash flood is minimized because the water is impounded on those 7 dams. When the rains have stopped, there is option to release the water to allow more space for the dams to take in excess water in another round of heavy rains. Or to hold it there for mini-hydro power, or irrigation, or for fishery and recreation. We only have few dams in the country.

Dams need not be huge and gigantic and contain several million cu.m. of water. They can be small, even micro size if regular water intake is small.

Perhaps some groups or companies just want to be solar pushers (no different from drug pushers) and enjoy the P20B of tax money for a single year for this project alone.
--------------