Cheaper electricity and stable energy supply are among the important components to have fast and sustainable economic growth.

On Jan. 17, the Philippine Electricity Market Corp. (PEMC) sent a press release saying that “effective settlement spot prices (ESSPs) in the wholesale electricity spot market (WESM) plunged to P2.28/kWH for the December 2016 billing period which is the lowest since January 2011. ESSPs refer to the average prices paid by wholesale customers for energy purchased from the spot market.” That is good news as various players using fossil fuel sources like coal, natural gas, and oil, are fiercely competing with each other in generating electricity. WESM was created by EPIRA of 2001.

On the same day, the Department of Energy (DoE) posted a “Request for comments on the draft Department Circular entitled ‘Declaring the launch of WESM in Mindanao’ (on Jan. 26, 2016) and providing for transition arrangements.” Another good news because finally, there will be a formal spot market for power producers and electric cooperatives that will guide a competitive and deregulated market, benefitting the consumers.

Last Dec. 23, 2016, the Energy Regulatory Commission (ERC) posted a request for public comments until Dec. 30 regarding the petition of three wind developers -- Trans-Asia Renewable Energy Corporation (TAREC), Alternergy Wind One Corporation (AWOC), and Petrowind Energy, Inc. (PWEI) -- that their feed in tariff (FiT) or guaranteed price for 20 years of P7.40/kWh be raised to P7.93/kWh, citing various cost escalations. That was bad news because expensive electricity is never a virtue. I sent a letter to ERC Commissioner Salazar arguing that they say No to the petition.

And last Dec. 6, 2016, the ERC published in a newspaper a National Transmission Corp. (TransCo) petition asking for a FiT allowance (FiT-All) of 22.91 centavos/kWh starting January 2017. That’s also bad news because FiT payments by consumers keep rising fast. From an introductory price of only 4 centavos/kWh in 2015, became 12.40 centavos/kWh in 2016, and almost 23 centavos/kWh this year.

Now two factors will raise the FiT-All for 2017 beyond 23 centavos. (1) ERC will not be able to act on this by January or not even February 2017, that means there will be price underrecoveries that must be added to the original requested price. And (2) with low WESM prices the past few months -- P3.19/kWh last September, P2.91/kWh last October, P2.54/kWh last November (data from Meralco), and the P2.28/kWh ESSP last December -- this means that FiT-All will go up. This allowance is the difference between FiT rates (highest prices are solar of P10+/kWh this year due to price escalation, followed by wind, then biomass, cheapest is run of river hydro) and average WESM prices. Or FiT-ALL = FiT rates -- WESM prices

Expensive electricity is the hallmark of renewable energy favoritism anywhere in the world.

Understand that in my previous columns, it was shown that the main beneficiaries of expensive electricity from renewables in the Philippines are not ordinary firms but huge companies: the Lopez group (EDC Burgos wind) and Ayala group (Northern Luzon UPC Caparispisan wind, and Northwind Bangui) who got P8.53/kWh FiT and combined revenues of about P4.3 billion in 2015 alone. 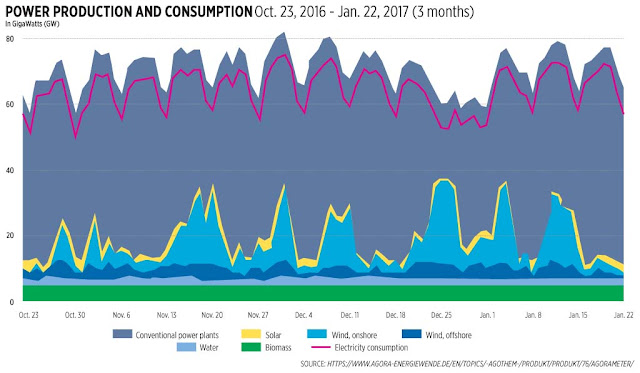 A total of only 2.1 GW was generated by solar-wind sources or only 3.7% of 57.4 GW power demand. If Germany relied solely on wind-solar, that would have meant massive, large-scale, and catastrophic blackouts. Germany of course was saved by the power plants that it wants to banish someday -- fossil fuel sources like coal and natural gas plus nuke power, within Germany and from energy imports from its European neighbors -- and which it kept running. So we did not hear or read such massive blackouts in Europe’s biggest economy.

Aside from expensive direct cost of wind and solar in Germany due to FiT, there is additional indirect cost of higher transmission cost. From a news report, “The Energiewende is running up against its limits” last Oct. 21, 2016 (http://energypost.eu/energiewende-running-limits/)

“German transmission system operator Tennet recently announced an 80% increase in its transmission fees because of the high construction costs of new power lines to accommodate renewable energy. A study of the Düsseldorf Institute for Competition Economics found that by 2025 costs of the Energiewende could exceed €25,000 for an average four-person household.”

The Joint Congressional Power Commission should consider introducing a law in the future that will abolish the RE Act of 2008 (RA 9513). Penalizing the energy consumers to further enrich the favored and crony firms in renewable energy is wrong.
-------------