Free Trade 65, On the US withrawal from the TPP 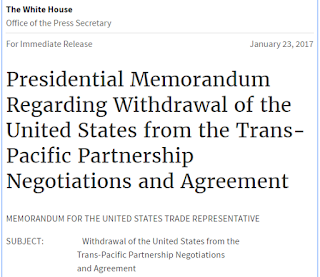 Last month, US President Donald Trump issued this Memorandum to the US Trade Representative. Part of it said,


“it is the intention of my Administration to deal directly with individual countries on a one-on-one (or bilateral) basis in negotiating future trade deals. Trade with other nations is, and always will be, of paramount importance to my Administration and to me, as President of the United States.

Global media outlets, even free market groups and leaders called this act as "US protectionism" and I disagree with this assessment. The US, the EU, ASEAN countries, all other countries in the planet have their own sets of protectionism, usually in the form of non-tariff barriers (NTBs) or non-tariff measures (NTMs). But withrawal from a regional free trade agreements (FTAs) = protectionism?

The purpose of regional  FTAs is to have free trade, freer mobility of services/people among member-countries in the region while retaining or expanding protectionism to non-member economies. Thus, the Trans Pacific Partnership (TPP) is free trade, zero tariff among the 12 member countries across the Pacific but not to other countries outside the agreement.

I see four implications of this move by Mr. Trump.

1. "Trade diversion" from non-members to TPP-members won't happen anymore. TPP is US + 11 other countries, of which 4 are from the ASEAN (MY, SG, VN, BR). So others not included in the TPP (ID, TH, PH, CM, SK, TW, etc) that are supposed to experience lower trade with the US will be spared of some negative effects due to trade diversion. http://www.bbc.com/news/world-us-canada-38721056

2. The biggest winners may be Asian countries that were left out of the  TPP (PH, TH, ID,...) and not China, so this article is wrong. https://hbr.org/.../if-trump-abandons-the-tpp-china-will...

Papers by Dr. Ramon Clarete of UPSE, Dr. Cesar Cororaton (formerly with PIDS, now in a US university) have computed the trade diversion effect. Something like -0.3 to -0.6% of potential GDP reduction in Asian countries not part of TPP.

3. More countries will realize that they need to push the multilateral, global free trade agenda under the WTO, instead of creating or expanding regional FTAs. If they can't do (a) multilateral free trade or (b) regional free trade, then (c) unilateral trade lib will become more attractive to them. ASEAN countries have done this step, across the board reduction in tariff even for non-ASEAN countries, but not towards zero tariff though, unlike SG and HK.

4. Japan will be pushed to the front to lead the TPP, http://www.wsj.com/.../japan-to-keep-pushing-free-trade....While China will continue pushing for RCEP, much bigger than TPP.

So, does stepping back from a regional FTA like TPP automatically means protectionism? If yes, how to explain HK which does not seem to belong to any regional FTA in the planet except with China, and HK is the most free trade economy in the world?

Stepping back from a regional FTA (TPP, TTIP, EU, NAFTA, AFTA, MERCUSOR, etc) may mean expanding free trade with more countries outside the region. Of course it may also mean further protectionism.

Bilateral FTA means that trade deals will be customized with each country's security and diplomatic offers or services. I think this means that there will be more trade and business diplomacy, less military/climate/political diplomacy. The top US diplomat, State Sec, is a big businessman, not big politician or big foreign affairs bureaucrat.
-------------