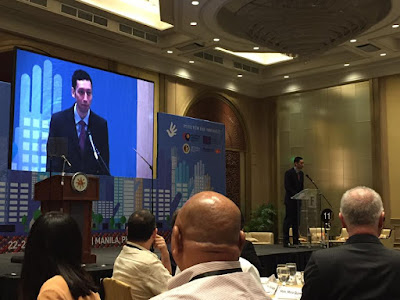 Below are some tweets under #efnasia2016

(1) From ruben dieckhoff ‏@rdieckhoff, 22-23 Nov 2016
"All politics is local." To save free trade/globalization you have to win the battles at home first says @barunsmitra

When political families move from controlling to owning companies this is neo-cronyism and eventually fails. See: Arab Spring

.@laveeshbhandari: how you can be free without education? Highlights susceptibility to populism for people who feel left behind

First protect dignity and rights of all individuals. Then start talking about economic liberty. Strong stance by @LoeningMarkus

Peter Perfecto: There is a tendency to rely heavily on the business sector, but there is only so much that business can do.

Dr. Laveesh Bhandari: There are enough laws that try to inhibit crony capitalism, but they very rarely get implemented.

Fred McMahon: The real driver of poverty reduction is not CSR, but economic freedom.

Fred McMahon: You cannot find a stable democracy that does not have a high level of economic freedom.

(3) Barun Mitra ‏@barunsmitra  22 Nov 2016
The discussion over basic rights and freedoms, have got confused by including entitlements and aspirations: Nick Sallnow-Smith

#EFNAsia2016 Rich & poor nations, high & low growth ones, democracies or not, across the world are experiencing populist nationalist upsurge

(4) Others:
Akash Shrestha ‏@aaktung  22 Nov 2016
"In an economically free society, you only get ahead by making other people better off" - Fred McMahon.

Rising #inequality per se not prob but poverty. If poverty declined but inequal increased, fine. It's not good to stop excellence.


Some consider child labor as HR violation but some households, it is necessary. If sole breadwinner is gone, young need to work.

No planner would know every indiv preference... Invasion of others’ freedoms, Liberal people end up illiberal - Nick Smith, LRI