Debating with a Du30 or Pinol faceless supporter (or troll?)

As I posted below about DA's solar irrigation proposal for P20 B next year, one faceless stranger named Federico Reyes debated  me in my wall. First he posted the media release of DA Sec. Pinol, then a youtube clip about "solar deep water pumping in the PH", to which I commented that it's nice water from a small hose, good initiative. And this is expected to irrigate rice fields that require thousands of cu.m. of water, good luck. 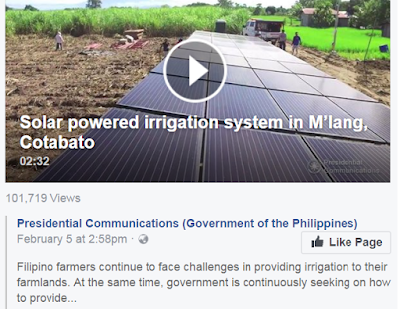 Then he posted this PR from RTVM/Malacanang about irrigation for rice farms. Serious or joking, the background is a sugarcane plantation, and behind Sec. Pinol in the interview is a banana plantation.

In short, the Malacanang demo area is not a typical rice village stretching for hundreds or thousands of hectares. It is a sugarcane + bananas + other crops, just a pocket of rice land for demonstration. And this type is supposed to irrigate millions of hectares of rice farms, wow.

Huge taxpayers' money at P20 B next year, but actual sustained irrigation output is a question mark. 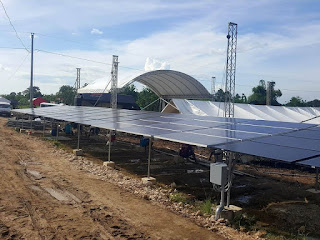 Another photo from Sec. Pinol's fb page as posted by Federico. This should be in another location/area. A solar farm occupying a substantial land area, to irrigate rice farms that economize land area? Speaking of contradiction.

A friend Joel commented in my wall, see Federico's reply, then my reply, below. 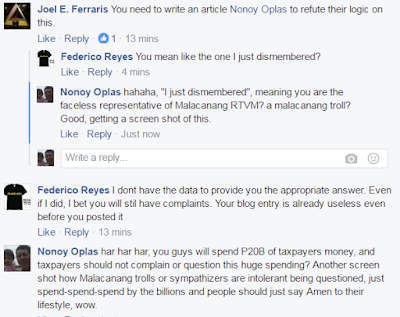 Later he suggested, “set your posts to private if you dont want "trolls" nosing around”. Nope, my wall is open. It attracts friends and strangers; bright minds and non-bright minds; facebook users and faceless users :-) Man, P20B is no joke, it's huge money. If people are going to defend it, they should endure hard questions. Besides, it’s them strangers who came to my wall, uninvited.

As usual, BIG government, big spending that require big and many taxes is lousy. Proponents can become onion-skinned when asked with hard questions, they are only interested in big money, not in debate that questions the rationality (there is none, in this case) of their proposals and actions.
Posted by Bienvenido Oplas Jr at 1:09 AM