“Progress by its very nature cannot be planned. It is knowing what we have not known before that makes us wiser men... Progress is movement for progress’ sake, for it is in the process of learning, and in the effects of having learned something new, that man enjoys the gift of his intelligence.”

-- Friedrich Hayek, Chapter 3,
“The Common Sense of Progress,”
The Constitution of Liberty (1960)

Many Asian societies have experienced economic and social upheavals and ups and downs in growth and political stability for more than the past two decades. These have been expected because people aspire for improvement and, as a result, they demand change.

After going through these upheavals, societies emerge somehow stronger, better, and more dynamic.

There are many indicators of growth and development and among them is the ability of the people in developing Asian economies to (a) travel by plane, (b) buy new models of mobile phones for communication and information, and (c) have access to the Web and the Internet.

Below are the numbers for selected Asian economies, grouped into three: (1) developing north and south Asia, (2) developing South East Asia, and (c) developed Asia plus Australia. For purposes of brevity, countries with small populations, those three million and below -- Bhutan, Brunei, Maldives, Mongolia -- are excluded from this list (see table). 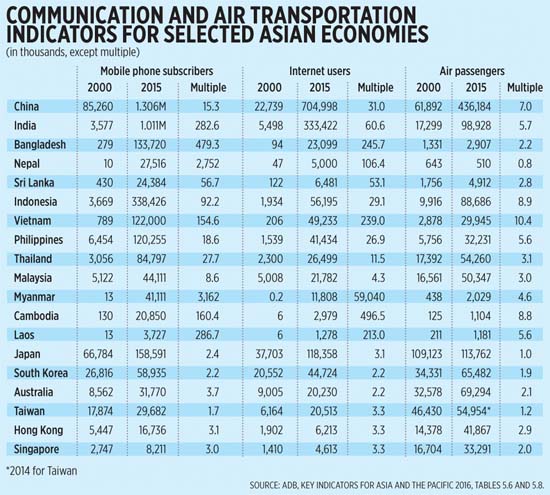 (1) The pace of expansion in mobile phone subscriptions and Internet use in developing economies has been very fast over the past decade and a half, especially for India, Bangladesh and Nepal; Cambodia, Laos, Myanmar and Vietnam (CLMV). As a result, people now can learn new and more skills, or simply be regularly connected with their families, clans, and friends.

(2) The same pattern can be seen in air travel, as indicated by the number of airline passengers in the region. Indonesia and the Philippines experienced fast rate of growth in this area, along with China, India, and CLMV.

(3) Expansion in developed Asia + Australia is muted and modest compared to their developing neighbors. 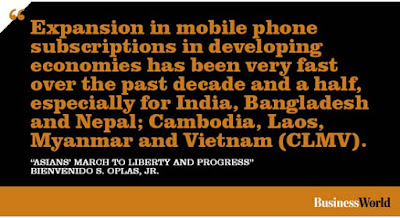 Therefore, Hayek is correct in his observation about human progress. It is the less-planned and less socially-engineered economies that are experiencing faster improvement at least in these three indicators. This is partly because the developed economies are dealing with plenty and rising government regulations that tend to restrict faster growth.

The subject of human and social progress in Asia will again be discussed in the forthcoming “Asia Liberty Forum” (ALF) in Mumbai, India, Feb. 9-11. This big international conference will be jointly sponsored by the Center for Civil Society (India), Atlas Economic Research Foundation (USA) and the Friedrich Naumann Foundation for Freedom (FNF, Germany).

Among the important topics to be discussed will be (a) overview of what’s happening in the freedom/liberal movement around the world and Asia, (b) State, private sector and liberty in a digital world, (c) Regulations for a prosperous and innovative market economy, (d) Property rights as a human right, and (e) Education of choice for all: the role of budget private schools.

The Economic Freedom Network (EFN) Asia is also participating by sending some of its regular and long-time partners in the region to the ALF. Aside from holding its own annual EFN Asia Conference, EFN is also participating in the annual ALF and the Jeju Forum for Peace and Prosperity in South Korea.

Through continuing involvement in these three important regional and global annual meetings and conferences, EFN Asia is doing its share in securing a more prosperous, more developed Asia through the path of less government planning and more market competition, deregulation, and innovation.

Bienvenido S. Oplas, Jr. is the head of Minimal Government Thinkers and a Fellow of SEANET. Both institutes are members of EFN Asia.
---------------