An excise tax is defined by the Department of Finance (DoF) as “a tax on products that have a negative effect on health or the environment... on nonessentials and luxury items.” With this definition, the DoF therefore, should abolish the tax on oil products, not increase it.

Here also are the 10 myths and alibi why the DoF and other sectors tend to demonize oil and are proposing oil tax to be as high as possible.

MYTH 1
OIL IS BAD FOR THE ENVIRONMENT.
Truth: Transportation of people and goods via cars, jeepneys, buses, and trucks that use oil is good for the environment because there will be no need for millions of cows, carabaos, or horses that produce tons of animal manure on the roads daily. Sure, there are particulates and other polluting gases but they are minor compared to tons of animal manure everywhere, more dirt, flies and worms in the environment. Also, cheaper LPG will encourage poor households to stop using firewood and charcoal for cooking which will result in more trees being saved.

MYTH 2
OIL IS BAD FOR PEOPLE’S HEALTH.
Truth: Cars, vans, jeepneys, and buses that use oil spare the oldies, sick, babies, pregnant women, etc. of hard labor and more diseases due to exposure to heat, rains, dust, and exhaustion if they were to ride bicycles or skateboards or animals that do not use oil. Also, transport of agricultural products from Ilocos, Cordillera, Cagayan Valley, or Bicol to Manila via animals not trucks will only lead to food spoilage. People will have little or no access to fresh vegetables and fruits, resulting in poor health.

MYTH 3
OIL IS NOT A PUBLIC GOOD.
Truth: Oil is a public good. As shown above, no petroleum, no modern and comfortable life, no mass production of food and transportation of people and goods. Public goods like public education, public health care, roads, bridges, etc. are either provided to the people for free or highly subsidized prices. Oil as a public good only needs zero tax, or at least low tax.

MYTH 4
MORE CO2 EMISSION FROM OIL MEANS MORE POLLUTION, MORE “MAN-MADE” CLIMATE CHANGE.
Truth: CO2 is not a pollutant gas; it is a useful gas. It is the gas that humans exhale, the gas that our pets and farm animals exhale, the gas that plants use to produce their own food via photosynthesis. Climate change is natural and cyclical. Planet Earth is 4.6B years old, there was climate change ever since marked by warming and cooling cycles.

Government simply has too many personnel, officials, employees, consultants and pensioners; too many offices, travels, trainings, and meetings. Perhaps these items alone constitute about 70%-80% of the annual budget. So little is left for public infra, school buildings, government hospitals, etc.

MYTH 6
THE OIL TAX INCREASE WILL HAVE MINIMAL IMPACT ON THE POOR.
Truth: Oil is used by the poor not only in jeepneys but also in tricycles, farm tractors and harvesters, irrigation pumps, fishing boats, interisland boats, generator sets in off-grid islands. While the DoF plans to introduce “Pantawid Pasada” for jeepneys, nothing has been allotted for farm tractors and other equipment used by poorer farmers, fisherfolks, hunters, etc.

As shown below, fishing boats that use gasoline, tractors and irrigation pumps that use diesel, tricycles that also use gasoline, will be slapped with 12%-19% price hike simply because of the proposed tax hike (see table). 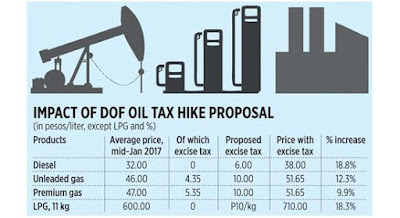 MYTH 7
THE OIL TAX INCREASE WILL HIT THE RICH MORE THAN THE POOR.
Truth: Oil use is a small portion of the overall consumption of the rich. The rich buy more expensive but more fuel-efficient cars and SUVs, they spend more on expensive restaurants, hotels, schools and universities, condos and subdivisions, etc.

MYTH 8
FOOD PRICES WILL NOT GO UP SIGNIFICANTLY WITH OIL TAX HIKE.
As mentioned above, oil is used not only by trucks, jeeps, and boats that transport agriculture, meat and fishery products. Oil is also used by farm tractors and harvesters, fishing boats. A 3.6% food inflation in 2016 (despite around 50% hike in diesel prices) is not small for the poor.

MYTH 9
NO OR LOW EXCISE TAX MEANS SUBSIDIZING THE OIL CONSUMPTION OF THE MIDDLE CLASS AND RICH.
Truth: There is no subsidy, zero, unlike subsidies for public education and health care or rice price subsidies using tax money. When you walk down the street and encounter a mugger who didn’t demand your money, you do not owe that mugger anything.

MYTH 10
GOVERNMENT IS LOSING SOME P145 BILLION/YEAR POTENTIAL OIL TAX REVENUES.
Truth: Government has no entitlement to more income and savings of the people other than income taxes that are already high, and other existing taxes. Government is losing more from wasteful spending or stolen money via corruption. Government can save more money for infrastructure by reducing too many personnel and consultants and by abolishing and defunding old welfare programs that do not work before it creates new welfare programs.

Bienvenido S. Oplas, Jr. is the head of Minimal Government Thinkers and a Fellow of SEANET. Both are members of Economic Freedom Network (EFN) Asia.
-------------