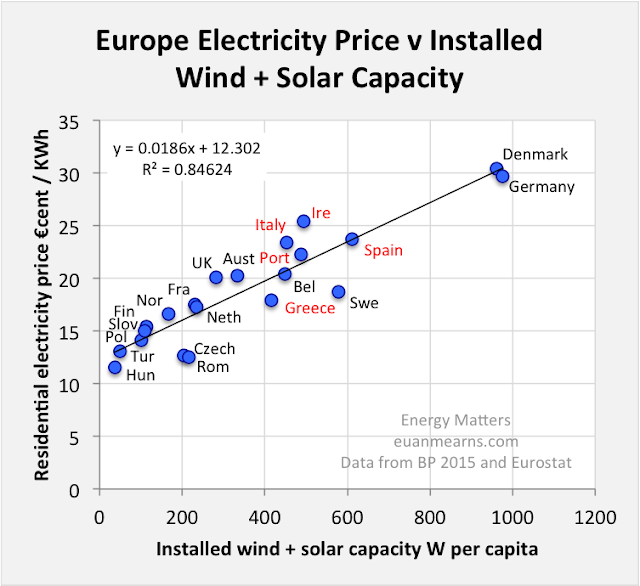 Another data from Euan Mearns. Left chart is for industrial customers, right chart for household/residential customers.

A friend commented that "We should treat the subsidies as state support to explore alternative energy sources."

It is not "state support" but "consumers support". The state, the DOE or Malacanang or Congress have no money of their own. It is ultimately the consumers who pay for more expensive electricity, including those who (a) do not support more subsidies to REs in Luzon-Visayas, and (b) consumers in Mindanao who are not even members/part of WESM because Mindanao grid is not yet connected to Luzon-Visayas grids.

Imagine if only Luzon-Visayas consumers pay for FIT here, the price would have been about 18 centavos/kWh last year and could be 28 centavos/kWh this year. Remember also that these are just "intro prices", first 3 years of FIT implementation with 17 more years for existing RE plants and with with RE plants added to the grid plus FIT price escalation, expect 30, 50 centavos/kWh or more in the coming years, FIT alone. Eh current WESM prices are only about P2.80/kWh, why do we pay P9+, P10+/kWh for wind and solar? Fluctuating pa every minute, every second.

Look at Europe again, the charts above. They have the longest system of subsidies for renewables, perhaps for the past 20 or 30 years. RE prices coming down? No, the opposite happens, (a) prices keep rising, and (b) grid instability rising, they are talking of blackouts soon in UK, Germany, Denmark, etc. because of more wind and solar added to the grid.

Meanwhile, more news reports about RE in Europe.

(1) "The cost of the botched renewable heat incentive (RHI) scheme to the Northern Ireland taxpayer will be £490m." http://www.bbc.com/news/uk-northern-ireland-38414486

(2) "The way the Renewable Heat Incentive (RHI) scheme was set up in Northern Ireland meant the subsidies offered were greater than the cost of the fuel.[The scheme was run by offering £1.40 for every £1 spent on heating.]" http://www.thegwpf.com/renewable-energy-scandal-rocks-britain/

Many "more RE to save the planet" advocates say that REs like wind and solar are attaining "grid parity" and getting cheaper, more competitive. If this is true, subsidies can be cut or removed but when subsidies are cut, those REs shrink. No subsidies, cheaper electricity for consumers mean these REs will die. Case of UK.

(3) "The U.K.’s renewable and low-carbon energy sector shrank by 8.7 percent last year, partly because of cuts to subsidies. The sector, from wind farms to electric vehicles, turned over 42.2 billion pounds ($52.5 billion) in 2015, provisional figures by the Office for National Statistics showed on Friday. That’s lower than the 46.2 billion pound recorded in 2014."
https://www.bloomberg.com/news/articles/2016-12-16/u-k-clean-energy-sector-shrinks-after-government-subsidy-cuts

Energy rationing, like food rationing, toilet paper rationing in socialist economies. May soon happen in industrial and former imperial power UK. And the "planet saviours" will jump with joy?

(4) "The British Infrastructure Group, led by former Conservative minister Grant Shapps, warned lights could go out across the country next winter because there is not enough spare capacity in the system to cope with higher demand. There is just 0.1 per cent spare electricity in the current system, a dangerously small amount of headroom in case of emergencies over the winter months, the report warned."
http://www.telegraph.co.uk/news/2016/12/19/electricity-bills-set-rise-30-year-power-rationed-amid-shortage/ 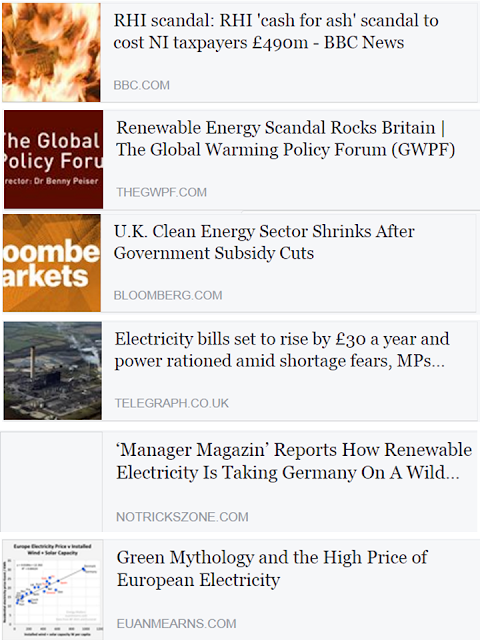