Here is my list of 5 international and 5 national or Philippine important energy issues last year.

1. Donald Trump and his energy policies.

US president-elect Donald Trump’s energy policies are summarized in his major campaign platform, “Seven actions to protect American workers” and these include:

“FIFTH, I will lift the restrictions on the production of $50 trillion dollars’ worth of job-producing American energy reserves, including shale, oil, natural gas and clean coal... SEVENTH, cancel billions in payments to UN climate change programs and use the money to fix America’s water and environmental infrastructure.”

So far some of Mr. Trump’s Cabinet Secretaries are his fellow skeptics of the anthropogenic or “man-made” climate change claim (climate change is largely cyclical and natural or “nature-made”), or simply pro-oil. These include: (a) Environmental Protection Agency (EPA) head is Scott Pruitt, former attorney general of Oklahoma; (b) DoE Secretary is former Texas Governor Rick Perry who is pro-drilling; and (c) Secretary of State is Rex Tillerson, CEO of the oil giant Exxon Mobil Corp.

For eight years, OPEC never cut its oil production despite declining oil prices to protect its global market share under intense pressure from huge shale oil supply from the US. In November 2016, OPEC finally blinked and decided to cut their collective oil output by 1.2 million barrels per day (mbpd) hoping for an increase in oil prices. Non-OPEC countries like Russia and Mexico made an agreement with OPEC to cut output by another 0.56 mbpd, for a total projected output cutback of about 1.8 mbpd. So far, price impact was marginal as oil prices before this OPEC decision was already touching $50 a barrel. But once US shale oil output ramps up, this marginal price increase can easily be reversed.

The numbers below show that countries with expensive electricity (1-5) have zero or little nuclear power, have high wind power (except Belgium and Italy), and high solar capacity (except Spain). And cheaper electricity countries (6-10) have high nuclear power (except UK and Netherlands) and low wind (except Sweden), low solar capacity (see Table 1). 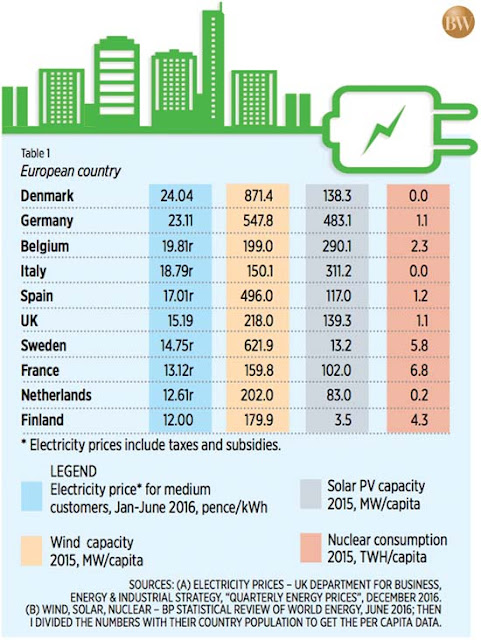 Based on a recent report by Exxon Mobil which grabbed global energy headlines, it said that it expects China, India, and the rest of Asia Pacific (including Japan, ASEAN, and Australia) will increase its global share of total energy demand from 234 quadrillion British thermal units (BTUS) in 2015 to 322 quadrillion BTUs by 2040. The percentage share of the region will rise from 41% of global demand in 2015 to 46% by 2040. In contrast, the share of EU and the US combined will shrink from 28% in 2015 to only 22% by 2040 (see Table 2). 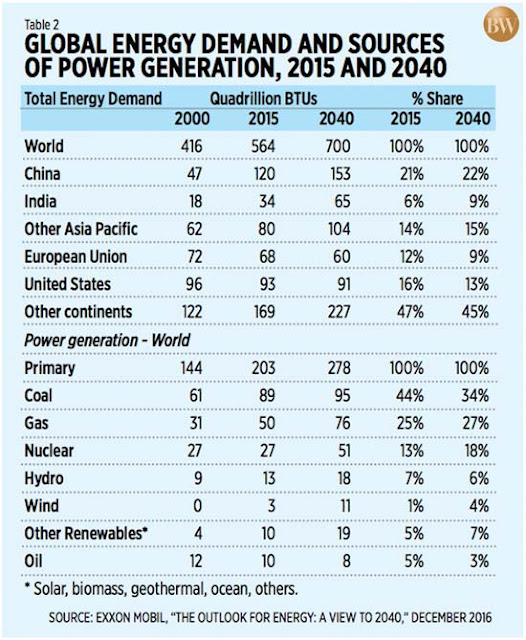 5. By 2040, wind, solar, biomass, other renewables will contribute only 11% of total global power generation.

6. Search for an Independent Market Operator (IMO) of WESM.

In the last Congress, then Sen. Serge Osmeña, Chairman of the Senate Committee on Energy conducted a series of meetings until January 2016 about the absence of an IMO that is supposed to manage the Wholesale Electricity Spot Market (WESM). The Philippine Electricity Market Corporation (PEMC) as market operator of WESM remains weird because (a) PEMC Board is chaired by the DoE Secretary, many board members are government officials; (b) Even the supposed four independent directors plus consumer representative (5 total) are all appointed by the DoE Secretary; and (c) PEMC is regulated by the Energy Regulatory Commission (ERC), which is under the administrative control of the DoE Secretary, who chairs the PEMC that is regulated by ERC.

Aside from issues on the new Market Management System (MMS) for WESM rules and the transition to a real IMO, the move to create a WESM in Mindanao via the Interim Mindanao Electricity Market (IMEM) is gaining ground. The Mindanao dispatch protocol will have to be spelled out in detail too.

In June 2016, the DoE issued a draft Department Circular (DC) on RPS, a provision in the RE Act of 2008 (RA 9513) that “requires electricity suppliers to source an agreed portion of their energy supply from eligible RE resources.” This RPS will result in more expensive electricity because wind, solar, biomass, and small hydro that are not given feed in tariff (FiT) privilege of guaranteed price for 20 years can demand higher price for their energy output because distribution utilities will have zero choice but buy from them otherwise the DoE will penalize them.

The draft DC wanted an initial “2.15% to be applied to the total supply portfolio of the Mandated Participant in each grid.” When asked what will be the projected price implication of such policy, DoE and National Renewable Energy Board (NREB) officials answered that no study on price implications has been made yet. A weird proposal where proponents have no clear idea on the cost of implementation to energy consumers, the DC was shelved.

9. Shift in energy mix from energy source to system capability.

During the administration of DoE Secretaries Petilla and Monsada, the DoE wanted an energy mix based on energy source or technology, 30-30-30-10 for coal-natural gas-RE-oil, respectively. This is highly distortionary because many REs are either seasonal (hydro can be baseload only during the rainy season, biomass can be baseload only if feedstock is available) or intermittent like wind and solar. New DoE Secretary Cusi changed the energy mix based on system capability: 70-20-10 for base load-mid merit-peaking plants, respectively. This is a more rational mixture.

As more solar farms and wind farms are constructed nationwide, their developers and owners are lobbying hard for an expanded FiT 2 with guaranteed price for 20 years. Even geothermal developers also lobbied that their new plants should also be given FiT. Currently, three wind developers -- Trans-Asia Renewable Energy Corporation (TAREC), Alternergy Wind One Corporation (AWOC), and Petrowind Energy, Inc. (PWEI) are petitioning the ERC that their FiT rate be raised from P7.40/kWh to P7.93/kWh. Three wind farms were lucky or favored to get P8.53/kWh under the original FiT -- EDC Burgos (Lopez group), Northern Luzon UPC Caparispisan (Ayala group) and Northwind Power Bangui (partly Ayala).
---------------