Some PH Senators declared that the Senate will ratify the Paris Agreement of more expensive, unstable electricity "to save the planet" even if the DOE did not concur with it. Portion of the report said, "32 of the 33 agencies having already submitted their certificates of concurrence to Malacañang."
(Phl to ratify Paris climate pact in July, Philippine Star, January 10, 2017)

“In the Cabinet, officially I have the only department that has not concurred in the ratification of the climate [pact].”

“I cannot concur on the ratification of the climate change [pact] because that can be used against DoE in approving the kind of power plants that we are going to have,” he said.

Mr. Cusi said the country’s pledge to cut carbon emissions by 70% means reaching a level that has already been met -- in 2015.

“What does it mean? Wala na tayong gagawin [We can’t do anything],” he said, referring to curtailing the country’s development."
(Energy department calls for foreign funding of global warming measures, BWorld, Dec. 12, 2016)

Many big countries like the US, Germany, UK, have not ratified their Paris commitment. Those who ratified are mostly small countries. $100 B a year of climate money transfer from developed to developing countries has become a huge extortion project that will produce huge disappointment from beggar countries. Almost ALL developed countries are already heavily indebted, they have huge public debts, don't have enough money for their own citizens. And they will give away huge money to developing countries, many of whom are led by despots and corrupt leaders, will not happen.

The degree of climate extortion varies. While the "consensus" is $100 B a year starting 2020, some UN officials and planet saviours want $500 B a year. Less flood or no flood or more floods; less snow, no snow or more snow, that money should be given to them. 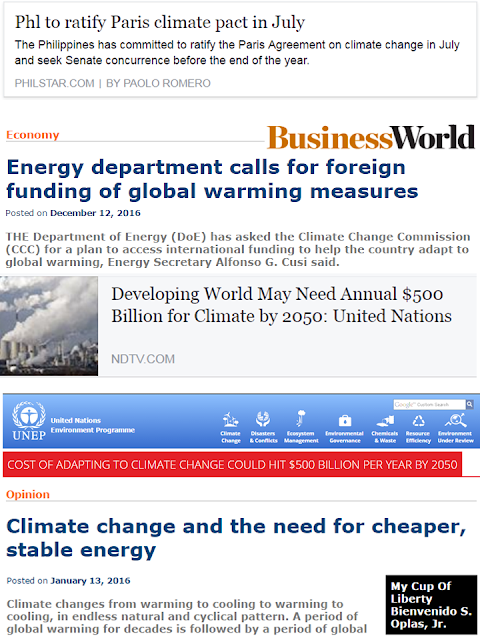 As for energy prices, Meralco generation charges for Sept-Oct-Nov 2016 below. All these power plants are using coal and nat gas, except TMO, a peaking plant that uses oil. WESM prices are cheap, down to only P2.54/kWh last Nov. Which means FIT Allowance will be high so that pampered solar and wind plants at P8 to P10+ per kWh will remain "viable" through expensive electricity imposed on all energy consumers nationwide. 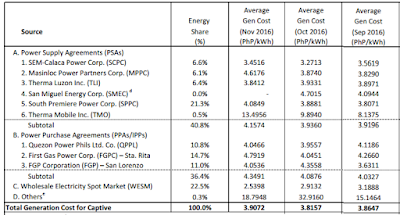 Sec. Cusi's energy realism should be supported against energy alarmism by other agencies and groups.
---------------