Taking off from the paper by a friend and fellow columnist Romy Bernardo’s “Wishes for the economy in 2017” last Monday, this paper will make some raw projections of GDP size until 2026.

The base document is the IMF’s World Economic Outlook (WEO), October 2016 database. In the table below, GDP size is based on purchasing power parity (PPP) values, not nominal or current values. Actual data for 2006, 2016, and 2021 are IMF projections.

Now this paper will take a longer but very raw view by projecting potential GDP size by 2026. Here is the raw and crude methodology.

Readers with more advanced data and econometric tools will scoff at this raw methodology but please understand that this is just an attempt and the limitations of the assumption have been stated. So here is what we can project in the next few years.

From this table, we can summarize important projections for selected Asian economies.

1. In 2016, four Asian countries would remain in the 10 largest economies in the world: China, India, Japan, and Indonesia.

2. Six of the 10 ASEAN countries would belong to the Top 40 largest economies in the world in 2016: Indonesia, Thailand, Malaysia, Philippines, Vietnam and Singapore.

3. By 2021, Indonesia will overtake Brazil in the seventh spot and will be in a striking distance to dislodge Russia in the sixth spot.

6. By 2026, assuming that the raw projections will somehow hold, the combined size of China and India will be larger than the combined economies of US, Japan, Germany, Russia, Brazil, UK, France, Mexico, and Italy.

7. Also by 2026, Indonesia will become the 5th largest economy in the world, overtaking Japan, Germany, Russia, and Brazil.

8. And the Philippines will rise to the 22nd spot, further overtaking Taiwan, Nigeria, and Poland. It will also be in a striking distance to overtake Thailand and Australia by then.

9. Pakistan and Vietnam, also having big and young population like India, Indonesia, and Philippines, will also significantly expand their economic sizes and improve their ranking.

10. While Japan is expanding marginally, South Korea will sustain its growth. Now, a collapse of North Korea (possible within the next six to eight years) and unification of the two Koreas will possibly make them overtake France in the #10 spot. 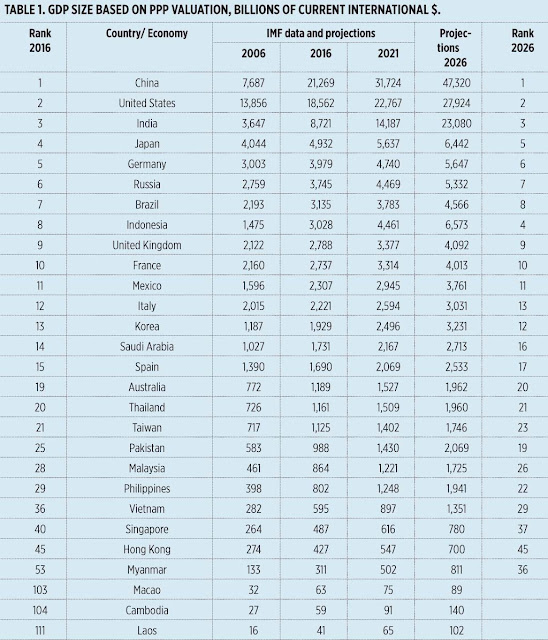 Many things will happen in the coming years so those IMF projections for 2021 and the assumptions made in this paper for 2026 can be considered as suggestions with some material basis. We still take actual numbers as they become available as basis for policy reforms.


Other Asian governments should take lessons from the experience of Europe and Japan: an ageing population will be a drag in further economic expansion. Policies that control population or heavily restrict migration are wrong, as wrong as trade protectionism, heavy taxation, and stifling business regulations. Governments should avoid these policies.
------------