BWorld 103, How to improve the RORO system 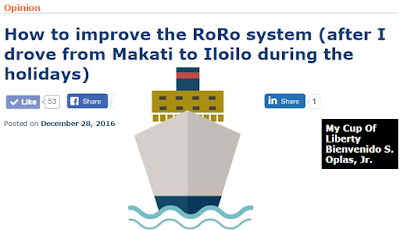 The Roll-on, Roll-off (RoRo) boat system of transporting trucks, buses, and cars from one island to another is among the best inventions for archipelagic countries like the Philippines. Vehicles go inside the boat, passengers come onboard, and the boat travels to another island where it docks, unloading passengers and their cars on the way to their destinations.

My first RoRo experience was in the late 1990s when I took the bus from Cubao to Iloilo City. It was an adventure to see for the first time Oriental Mindoro outside Puerto Galera, Panay island from north to south, and the Aklan-Capiz-Iloilo provinces. It was a 25-hour trip because there were few RoRo boats that plied the Batangas-Calapan then Roxas, Oriental Mindoro-Caticlan, Aklan routes. It was exhausting but fun.

My second RoRo experience was in 2003 when I traveled by bus from Sweden to Netherlands via Denmark and Germany. Our bus entered a huge boat somewhere in Denmark, the boat traveled to and docked in Hamburg, then we boarded the bus again and traveled to The Hague, where I visited a friend.

There was a big difference between the Denmark/Germany and Philippine RoRo system of course.

First, since the boats in the former are huge, the vehicles -- once onboard -- aren’t cramped unlike in local boats.

Second, waiting time at the port in Denmark was short and didn’t take hours.

Last Dec. 21, I drove again like December last year from Makati to Iloilo City with my family, lugging cargo that weighed 300 kilos. Since it was the holiday season, there were lots of travelers who took their cars, unduly extending the waiting time for vehicles to get onboard.

In Roxas port, a duopoly, Montenegro and StarLite shipping lines, serve the Roxas-Caticlan route now; last year, there was SuperShuttle as the third player.

When I arrived at Roxas port, there were many cars trying to get to the next Montenegro boat while StarLite ticket office was still closed, so I drove one more hour from Roxas to Bulalacao, Oriental Mindoro, to take the Bulalacao-Caticlan route that was served only by FastCat. So FastCat is the third player to serve passengers and vehicles going to Caticlan but it’s on a different, farther seaport.

For those planning to try this adventure for the first or second time, here are the costs to bring your car to Panay island.

5. FastCat boat: P3,380/car, passengers can take the economy, premium or business classes. The latter is P500/head, P400 for students, P250 for children. Car driver is free but only for economy seat. Upgrade to business class is additional P125.

6. Fuel/diesel, Makati to Iloilo, 500+ kms, depending on car fuel consumption. My pickup consumed about P1,000.

I spent a total of P9,000 all in all, one way, from Makati to Iloilo, which is cheaper than flying for four people -- my wife, two kids, and me -- especially in December when fares are high. That doesn’t include the airport terminal fees, baggage check in charges, and taxi fares to and from the airport.

So driving a car via RoRo with about 300 kilos of cargo is cheaper.

Although long car rides tend to be inconvenient, it was nevertheless fun for my passengers, especially for my two girls who enjoyed the boat ride.

Some ugly experiences that one may encounter if driving during the holiday/Christmas season:

1. Waiting for one or two hours or more outside the gate of Batangas port as there are many cars and trucks queuing to board a boat to Calapan. Cars going to destinations other than Calapan (Abra de Ilog, etc.), they can go in anytime, no long queues for them.

2. New security bureaucracy at Batangas port. All bus passengers and car drivers must alight and go through a security check along with their hand carried bags, get the signature of an officer, go back to their vehicles and drive to the queue area for the boat ride to Calapan or other destinations. This was not done last year and previous years.

3. The Roxas, Oriental Mindoro municipal government acts like a typical extortionist. It collects P50 for each car entering and exiting Roxas port. Zero public service for visitors because the port and the roads were made by the national government, and it has a share from the various fees paid by the shipping lines. Many local governments that host ports behave this way too.

Three possible reforms to modernize the country’s RoRo system are the following.

One, consider RoRo system as a bridge, not as a seaport.

Allow unhampered movement of vehicles from one island to another as if they are just crossing a bridge and quickly proceed to their destinations. This implies that RoRo development and streamlining be put under the DPWH, not under DoTr. I heard this proposal during the Manufacturing Summit 2016 last November sponsored by the DTI and BOI.

Two, allow more shipping lines, more players to serve important routes like Batangas-Calapan, Batangas-Caticlan, Roxas-Caticlan, Sorsogon-Samar, and so on. More routes mean more options for motorists and passengers. Government should reduce the bureaucracies and taxes for new players to come in, or for existing players to expand and modernize their fleet.

Three, allow private developers, shipping lines and/or bus lines to put up their own ports, meaning deregulate and demonopolize the PPA.
-------------

Email ThisBlogThis!Share to TwitterShare to FacebookShare to Pinterest
Labels: RORO