BWorld 100, Multinationals in the PH, what do they want?

CAPITAL AND INVESTMENTS are like water — they go where they are welcome and accommodated. Small water tributaries merge with others to become a big river, a lake, or drain into the seas. In the same way, capital congregates in areas where they are protected and allowed entry and exit with the minimum restrictions and prohibitions.
That is how some small countries and territories with fewer populations become wealthy and prosperous financial centers such as Singapore and Hong Kong.

Almost all speakers talked about their respective companies and their contributions to the country’s economic growth and job creation, among others. Mr. Schumacher, being the most experienced foreign businessman among them, provided the most direct answers to the theme. He said that what the foreign investors are looking for, among others, are (1) safe and secure investment locations like PEZA and other ecozones, (2) business-friendly local government units (LGUs), partnership between LGUs and businesses.

The turn off for businesses he said, are (1) corruption and unethical business practices, (2) no peace and order, and (3) changing rules and policies.

The World Economic Forum (WEF) produces an annual Global Competitiveness Report (GCR) where it measures 12 pillars of competitiveness of countries and economies worldwide. The pillars are grouped into three major subindices — basic requirements (pillars 1-4), efficiency enhancers (pillars 5-10), and innovation and sophistication factors (pillars 11-12). From these three subindices, the global competitiveness index (GCI) is computed and countries are ranked from highest to lowest. 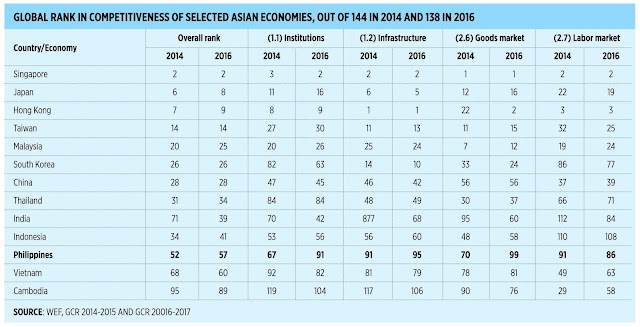 Multinational corporations in the Philippines: What do they want?

These numbers show the following:
One, Singapore, Japan, and Hong Kong are in the top 10 most competitive economies in the world, with very high scores and ranking in infrastructure.

Two, the Philippines needs to improve efficiency and competitiveness in these four pillars because they have pulled down the country’s overall ranking. There was even a decline in overall ranking from 52nd in 2014 to 57th in 2016.

Three, there are lessons to learn from neighbors Malaysia, Thailand  and Indonesia which have higher rankings than the Philippines. Vietnam and Cambodia’s overall ranks are improving and Vietnam may soon overtake the Philippines.

In short, government is mainly the problem.

There are three possible solutions here. One is to institute huge, large-scale professionalism in government, both elected and appointed bureaucracies, in both national and local government agencies.

Two, shrink the size and burden of government bureaucracies, regulations and taxation.


And three is to do both, improve the professionalism while shrinking the size of bureaucracies so that they can focus more on enforcing the rule of law and have little time and space for creating new regulations and taxation that tend to complicate if not contradict previous ones.
--------------