Global trade has significantly slowed down in 2015 which is ironic because it was the start of significant oil price declines. After recovering from the 2009-2010 global financial turmoil that started in the US, global exports reached $18.3 trillion in 2011, $19.0 trillion in 2014, but declined to $16.5 trillion in 2015.

Nonetheless, there are some good news in Asian trade which battled this global trend in export decline.

3 Five ASEAN countries are important players in global merchandise trade with at least $150 billion in exports. The Philippines is playing a far catch up with Indonesia and Vietnam.

4 In services trade (including revenues from tourism and business process outsourcing (BPO) firms) many Asian economies still remain part of the big- and medium-size players, at par or even larger than the average European economies. The $915-billion revenues in 2015 is for all 28 EU economies.

5 Within the ASEAN, the Philippines is a medium-size services exporter while Indonesia did not belong to the top 50 in 2015 (see Table 1). 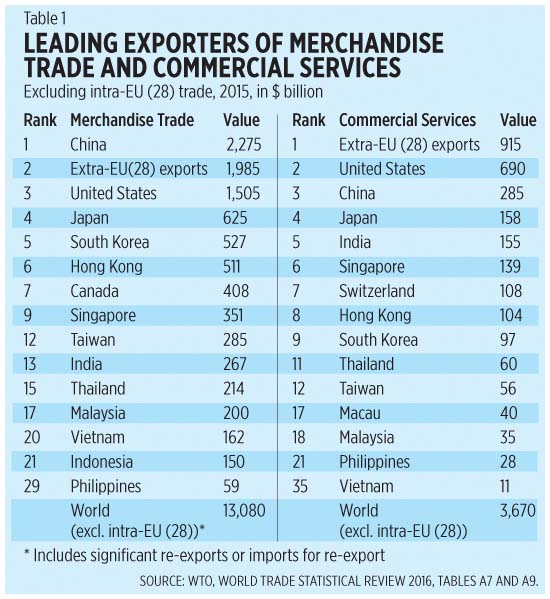 7 Of the economic blocs and free trade areas (FTAs) in the world, ASEAN is the third biggest next to the European Union and North American FTA (NAFTA). They are followed by the Gulf Cooperation Council (GCC), European FTA (EFTA), SAARC Preferential Trading Arrangement (SAPTA), and Mercado Común del Sur (MERCUSOR). 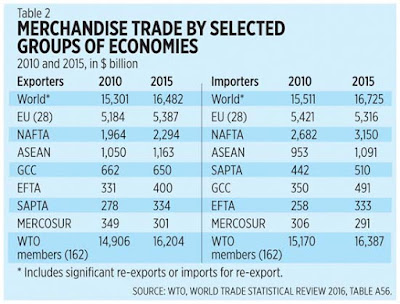 9 The statement “this is the Asian century” in terms of trade and GDP growth will become true starting this decade. The main factor to sustain this momentum is Asia’s huge and generally young population especially in India, Indonesia, Philippines, and Vietnam, comprising 1.7 billion people with an average age of only 24-25 years old which is one-half of the average age of Japan and many developed countries in Europe.

10 The statement “If America (or Europe) turns protectionist, Asia loses” is wrong. Whoever starts serious protectionism is the loser. Free trade creates good will with other countries while expanding the choices and options for local consumers and manufacturers, which expand their productive capacity.

Should Mr. Trump proceed with his campaign promise to ditch the Trans-Pacific Partnership (TPP), it can be good news for other Asian economies that are outside of the five Asian economies that are part of the TPP. They are expected to suffer some exports decline to big markets of the US, Canada, and Japan due to trade diversion from non-members to TPP members.

Freer trade and fewer restrictions in the movement of goods and people are becoming the norm in emerging and transitioning economies of Asia than in developed Asia, Europe, and America.


Bienvenido S. Oplas, Jr. is the president of Minimal Government Thinkers and a SEANET Fellow. Both institutes are members of Economic Freedom Network (EFN) Asia.
---------------