My former teacher at UP Diliman, Prof. Segundo "Doy" Romero posted one hour+ ago about road sharing. Part of his post,

"...As a people we should resolve to now be moving people, but we are moving private vehicles instead. Emergency powers are being readied to deal with the traffic crisis. Meantime, it's everyman and everywoman for himself. The answer to the mobiity crisis? Buy another car! This is to dodge the number coding restrictions.

This is where political will is supposed to be needed. It is time for radical solutions, like Tony Oposa's idea of road sharing -- half of all lanes for motorists, half of them for pedestrians and cyclists. Or steep congestion pricing...."

"half of all lanes for motorists, half of them for pedestrians and cyclists." Lousy proposal sir. You mix cars and buses with bicycles and skateboards and pedestrians in one road? and if one wayward bus or car hits any of those bicycles, pedestrians, who's to blame, Oposa? the bus/car driver? the pedestrians?

Sir Doy clarified that it's half of all lanes (e.g. 4 out of 8 lanes). Then a certain Benjamin de la Pena replied,

"Nonoy Oplas, that's a ridiculous comment. Who said anything about "mixing" - you build sidewalks, protected bike lanes, and transit only lanes."

I replied to both: "precisely sir. Edsa is 6 lanes, 3 for cars/buses/trucks, 3 for bicycles, skateboards, pedestrians. There will always be impatient drivers on the motorists lane, especially on an emergency trip or night time, etc. and will sway to the 3 lanes of bicycles, etc. Accidents will happen there. Who's to blame, Oposa and supporters? MMDA? drivers...?

Benjamin, you build sidewalks in the middle of EDSA? hehehe"

Then see the succeeding comments of Benjamin, calling me as "minimal thinking" which for me is an insult. 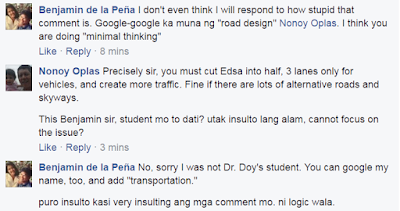 I am regularly engaged in a number of debates, past and present. I always make a distinction to criticize an idea or comment, not the person. Shoot the message, not the messenger. Like "that's a lousy idea" and not "Mr. X is lousy." Now see succeeding comments from this man. Explicitly saying that he was insulting me then claim later that he was not attacking me. 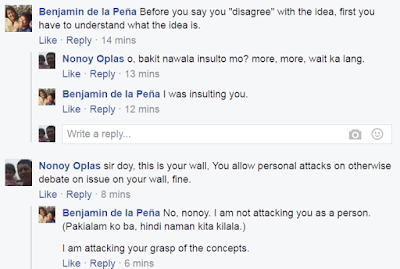 Sir Doy said that "Benjie is one of our foremost Filipino urban and mobility specialists in the country." His fb profile says that he also graduated from UP, studied Urban Planning at Harvard U, lives in Miami, Florida.

Fine, and if I criticize an idea -- mixing cars, buses, bicycles, pedestrians in Edsa -- he can personally insult or attack people who disagree with the idea? It speaks of his character.

Meanwhile, back to the issue. I notice that many people are actually forced to drive their cars because of the inconvenience and some dangers of multiple rides. Take someone living in UP Village or Batasan Hills in QC, working in Buendia, Makati or BGC, Taguig. Four rides: (1) tricycle from house to Philcoa or Sandiganbayan/Commonwealth, (2) jeepney from there to MRT station in Quezon Avenue, (3) MRT to Buendia or Ayala station, (4) jeep to office in Buendia or bus to BGC.

Four rides going to work, four rides going back home, 8 rides, daily. If one has to wear a formal corporate dress daily, or carrying a laptop, other important documents, or some big cash, it is very inconvenient to make those multiple transfers being exposed to street robbers, dust, heat, smog, or rain in between rides, the hassle of walking-waiting-standing between rides, etc.

Because of this inconvenience of public transpo, many middle class and rich people are forced to drive their cars or motorcycles, or take Uber/Grab/taxi, which means more private vehicles on the road, more traffic congestion. Even if the most modern MRT trains are available tomorrow, many people will still avoid those multiple rides and will use their cars or motorcycles.

One solution here would have been those air-con vans that act like school buses. Pick up passengers from the nearest points from their house, if not in front of their house, bring them to their offices in one convenient and comfortable ride. But LTFRB disallows this, they only allow point to point vans, which means people must walk or ride tricycles to the vans' terminal, then walk far or ride a jeep to their offices or final destinations, reverse the process going back home.

Those aircon vans were market solutions to the traffic problem. No taxpayers money, no new government bureaucracies will be committed to provide such solution, just allow the van owners/operators and commuters to decide the dynamics such service in terms of pricing/fare, service quality and safety.

This is not to say that I do not support the development of mass transport system, I support it. It's just that while it will take years if not decades to have a modern integrated transpo system, this house-to-office aircon vans transpo is the easiest, quickest, least distorting transpo solution to traffic congestion.

The road-sharing as proposed by Oposa, et al? No. Children, babies, oldies, physically disabled, pregnant women, those carrying important and heavy luggage, should be riding in comfort as much as possible, not pedaling or skating or walking in Edsa and other major roads. Thus, these roads should not be constricted via forced "road sharing"

Benjamin posted this on twitter, bragging that he insulted me.

Ahh, arrogant id___. Good that he lives in America, meaning one less arrogant soul in the Philippines. One disease of central planners is the tendency to be arrogant and "all-knowing" and their patience for contrary views is low.
----------------