Energy 88, Letter to ERC re petition by 3 wind companies for higher FIT

In relation to the ERC  invitation for public comments until December 30, 2016 of the petitions by Trans-Asia Renewable Energy Corporation (TAREC), Alternergy Wind One Corporation (AWOC), and Petrowind Energy, Inc. (PWEI) that their FIT rate be raised from P7.40/kWh to P7.93/kWh, may I send the following comments.

Please say NO to their petition. Here are the reasons why.

1. Expensive electricity is never a virtue. Many of the things we do and use now require electricity and therefore, cheap and stable electricity supply should be the aim of energy producers and generating companies.

2. Cost and price dynamics – rising or falling, higher or lower than what was assumed and projected – are part of capitalism and entrepreneurship. This includes the realization by the petitioners that their actual EPC cost, switchyards and transformers, transmission interconnection cost, O&M and other related expenses are much larger than what was assumed by the ERC in its earlier ruling.

3. There is indeed a big difference between the P8.53/kWh received by EDC Burgos (Lopez group),  Northern Luzon UPC Caparispisan (Ayala group) and Northwind Power Bangui (partly Ayala), and the P7.40/kWh received by the petitioners. Then let it be known by the electricity consumers that among the reasons why Philippine electricity prices remain high, why FIT-All keeps rising from 4 centavos/kWh in 2015 to 12.40 in 2016 and up to 23 or even 25 centavos/kWh in 2017, are due to these wind farms  that get high guaranteed and escalating price for 18 more years.

4. When public backlash against more expensive electricity from wind (and solar) will rise proportionate to the rise in FIT-All in the coming years, the three petitioners will somehow be relegated in the background as public attention will be focused on the Ayala and Lopez expensive wind farms, and the big solar farms with higher FIT rates.

The environmental costs of thousands of trees murdered on the ridges and mountain tops of Nabas, Aklan and Pililia, Rizal as PWEI and AWOC constructed wide roads, flattened ridges and built those huge wind towers in the mountains are actually not included in the supposed “environmental benefits” of those wind power plants.

Capitalism and entrepreneurship is about risks and returns, expansion, break even or bankruptcy. Nothing is guaranteed except constant competition and innovation, to cut costs and produce more per unit of input. Thus, the FIT system of guaranteed price for 20 years is abdication of the spirit of capitalism and entrepreneurship, while embracing statism and forever intervention by the state in pricing and output allocation and rationing.

Ultimately, the RE Act of 2008 contradicts the spirit of EPIRA of 2001 and hence, the former should later be significantly amended if not abolished. EPIRA moved things towards competitive, cheaper electricity prices and stable power supply while the RE Act moves towards the opposite, for more expensive electricity and unstable, intermittent and brownouts-friendly power supply.

I hope you will consider the above points.

Thank you very much.

Meanwhile, look at these news reports and press releases by their respective companies. Phinma says it is earning good money in TAREC. 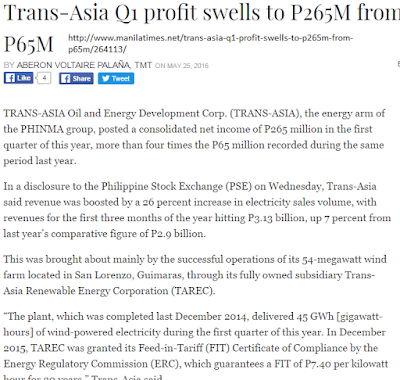 AWOC is expanding. From the current 54 MW will add 72 MW. Also in its website, it posted,
"On October 23, 2009, Alternergy has been awarded with six exclusive Wind Energy Service Contracts by the Department of Energy based on its financial and technical capabilities. One of which is the "Pililla, Rizal" Wind Energy Service Contract which covers an area of 4,515 hectares. The Project is estimated to generate approximately 40 MW capacity." 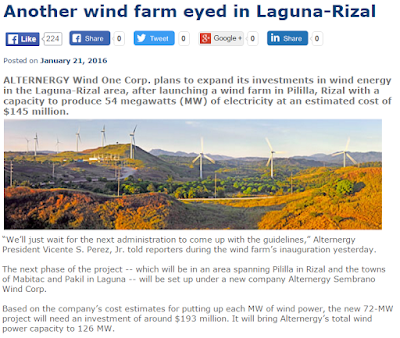 Meanwhile, look at the site of PWEI's Nabas wind farm in Aklan overlooking Boracay island. Mountain ridges were flattened and all trees and other vegetation there were removed. 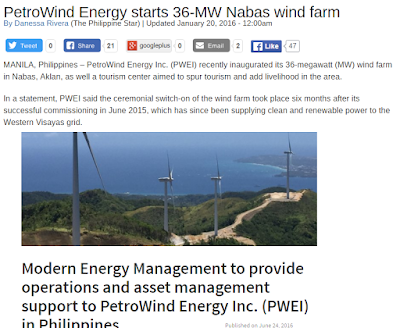 On October 23, 2009, Alternergy has been awarded with six exclusive Wind Energy Service Contracts by the Department of Energy based on its financial and technical capabilities. One of which is the "Pililla, Rizal" Wind Energy Service Contract which covers an area of 4,515 hectares. The Project is estimated to generate approximately 40 MW capacity.
Posted by Bienvenido Oplas Jr at 6:16 AM