"A market failure, in the parlance of economics, means a situation in which free markets produce wasteful outcomes." 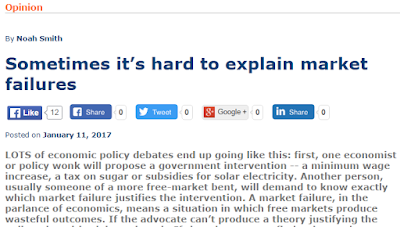 The above statement is wrong on 2 counts:
(1) Market failure is literal, demand is there but supply is low or zero, or vice versa. So failure of the market to adjust supply and demand.
(2) Market failure is often a parlance of politics and government, less of economics. It is a good justification for endless government intervention and expansion for people who have no or little concept of "government failure."

Anybody can create a market failure anytime, anywhere. How?

2. Mr. Y and his friends supply a rice variety that is said to cure 10 types of common diseases and sold at P800/kilo, no one buys their rice. Supply is there but demand is zero, so market failure also.

Given these two examples of market failures, do they justify government intervention? Like (1) using taxpayers' money to create a new govt-owned IT company to supply that 500 GB USB and sell only at P1k or less. Or (2) Govt to procure that rice and distribute for free or at high subsidies to sick people?

In public finance econ (Econ 151), there is one definition there, something like "Market failure is a necessary but not sufficient condition for government intervention."

Rightly so. Because (1) market failures are generally short-term and are signals for market solutions in the short- to long-term, and (2) government intervention may only worsen the original market failure and introduce its own government failure.

rom the same article, it says, "Public education... make economies more prosperous, and most economists support it, but no one can point to just why the free market doesn’t educate enough people on its own."

If people pay lots of taxes, fines, regulatory fees, mandatory social contributions, etc. to both national and local governments, there is little "disposable income" left for food, clothing, housing, gadgets, appliances, travel, etc. This explains why not many parents/guardians can send their kids to private schools, majority of parents send their kids to public education.