The holiday season, among others, is marked by the presence of so many lighted streets, buildings, malls, and houses. These sparkling and glittering Christmas lights and decors -- besides adding smiles and happiness -- also indicate continuing and rising material prosperity of the Philippines and its cities.

The change in the energy mix policy by the Department of Energy (DoE) is better appreciated in this context. Not only do people want cheaper electricity, they also want 24/7 energy with no brownout even for one minute.

First and foremost is the price impact to electricity consumers. Forcing and mandating more natural gas, more solar-wind into the grid and the distribution utilities will mean even more expensive electricity and more unstable energy supply because of the intermittency, on-off nature of wind-solar.

Consider the feed in tariff allowance (FiT-All) for the variable REs: four centavos/kWh in 2015, 12.40 centavos/kWh in 2016, and 23 centavos/kWh in 2017 based on Transco petition for FiT-All hike at the Energy Regulatory Commission. The bulk of this rising FiT cost to consumers will go to wind and solar plants because they have the higher rates and higher installed capacity. The 23 centavos is on the assumption that it will be granted by the ERC by January 2017. Further delays for few months will mean more under-recoveries and hence, higher rate of 25 centavos-28 centavos by 2017.

Second, our current power capacity and actual electricity production remains small compared to our more economically significant neighbors in the region, and our coal consumption is also way small compared to their coal use. It is not wise to further restrict our baseload power capacity if we aim to sustain fast economic growth into the next decades to come.

Brunei, Myanmar, and Cambodia are excluded from this list because of their small electricity production (see Table 2). 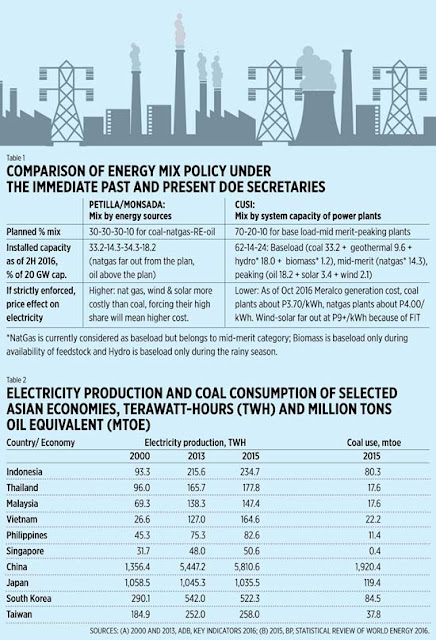 Third, the “more renewables to save the planet” argument does not hold water until now. Proof? Whenever I am engaged in a climate and energy debate with various groups and individuals who insist on the anthropogenic or “man-made” global warming/climate change (CC) hypothesis, I ask these two questions:

1. Of planet Earth’s 4.6 billion years age, when was the time, what period, that there was NO climate change?

2. What was it like before this “man-made” warming -- less rain, no rain, more rains? Less flood, no flood, more floods? Less snow, no snow, more snow? Please cite scientific sources for your two answers above.

One hundred percent of the time, their answer is the sound of silence. Or they will put various links, various reasons, and alibis but none of which answer directly any of the two questions. Which shows that the anthropogenic climate change argument remains shaky and questionable. Even the UN IPCC literatures do not discuss paleo-climate data dating back to millions of years ago. This is because planet Earth’s climate history is characterized by natural climate cycle of warming-cooling, with or without humans and their malls, cars, airplanes and coal power plants.

Mandating “more renewables to save the planet” will only succeed in making the country less developed, since electricity will become costly and supply unstable. Big energy-intensive manufacturing plants and foreign investments would rather locate in Vietnam, Thailand, Malaysia and Indonesia, countries with cheaper electricity and more stable, brownouts-proof energy supply, then export huge volume to the Philippines at zero tariff under the ASEAN Economic Community (AEC).


Of the many Cabinet Secretaries of the Duterte administration, DoE Secretary Cusi is among those standing tall. His energy realism (not alarmism) policies of “appropriate energy mix should be decided by the consumers, not by government” is a market- and growth-friendly philosophy.
--------------