A number of my friends have posted in facebook in agreement with this article from The Economist, "To be relevant, economists need to take politics into account." so I will post to contradict it. This article or its title is misleading if not wrong because:

(1) It is saying that economists writing about plain economics are not relevant, so to make them relevant, they must write about economics + politics + sociology + anthropology + history + genderology + ...?

(2) Consider a simple demand-supply price equilibrium theory. A big storm damaged crops in a major food producing region that substantially supplies food in M.Manila, so the supply goes down, the price goes up since demand remains the same. No need for politics, history, anthro, sociology, gender, etc. to inject into the analysis to make it relevant.

(3) Economists who comment on political issues -- politics around the world, political ramifications of federalism and parliamentarism, revamp of the constitution, etc. -- then they must insert politics, history, etc. in their analysis.

"Our argument is that economic policy should not just focus on removing market failures and correcting distortions but, particularly when it will affect the distribution of income and rents in society..." (last par. of the paper)

Can people, economists "remove market failures"? Wow. Only central planners would think that way. Consider these:

2. Mr. Y and his friends supply a rice variety that is said to cure 10 types of common diseases and sold at P800/kilo, no one buys their rice. Supply is there but demand is zero, so market failure.

Anyone, anytime and anywhere can create a market failure, as shown by 2 examples above. Some guys like economists (and politicians, etc.) think they can stop or remove that? Wow.

On inequality, it's part of nature, it's good. Otherwise people will work only few hours a day and demand that their pay, their house, healthcare, etc should be at least 1/5 that of the privileges enjoyed by Bill Gates and Henry Sy or John Gokongwei, etc. to have equality in society. The world has progressed because of respecting inequality, not forcing equality like socialist countries.

Now consider this drama by Oxfam and many other groups, institutions like the UN. https://www.oxfam.org/.../just-8-men-own-same-wealth-half... 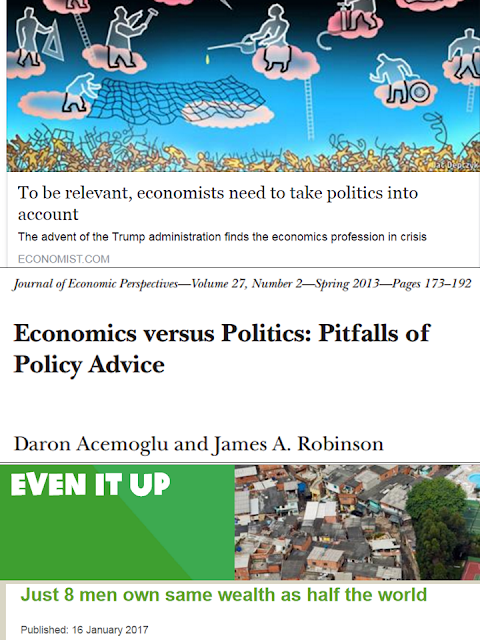 Ok, the incomes and wealth of Bill Gates, Zuckerberg, etc. have expanded up to the troposphere, did they make people's lives, our lives, poorer and lousier? Do we have lousy and despicable lives because Zuckerberg got richer each year because of facebook?

No. On the contrary, we enjoy more comfortable, more convenient lives because of the inventions of these super rich people. If people think that Zuckerberg et al are creating a more despicable world because of their inventions and companies, they better opt out of fb, youtube, google, iphone, etc because everytime they use those things, they contribute to further enrichment of these super super rich people.

The world enjoys more comfort, more welfare because of the innovations made by these super-efficient, super-ambitious and super-rich people. Soon people will be working only 4 or 3 days a week and still get high pay because of rising productivity (and rising inequality) introduced by those super-efficient people. We should support the expansion of more super rich people instead of demonizing them. The politics of envy is only for the envious, like Oxfam and the UN :-)

The only way to stop rising inequality is via dictatorship. Put a gun on people's heads and tell them to stop being too innovative, too inventive, too revolutionary in business, to stop and limit excellence.

Central planners would clap this scenario. They get huge pay and various political perks doing all types of social engineering to force equality in the world.
--------------