"if the Trump administration follows through on a pledge to cut the corporate income-tax rate from 35 percent to 15 percent, and slash individual rates..." https://www.bloomberg.com/news/articles/2017-01-10/trump-s-tax-cuts-could-jumpstart-global-economy-world-bank-says

"The first Trump tax cut will be the repeal of most or even all of the nearly 20 tax increases that funded Obamacare, which total about $1 trillion over the next decade. These are taxes on your health insurance, hospitals (both charitable and for-profit), medical devices, drugs, capital gains, your Health Savings Accounts and Flexible Savings accounts, out-of-pocket medical bills, and even a steep “indoor tanning tax.” https://medium.com/.../the-trump-tax-cuts-will-be-huge...

"The trillion dollars in higher taxes have restricted health care choice, increased costs, made saving more difficult, and granted government more control over care at the expense of individual control. Below are just some of the tax wins that will come from repealing ObamaCare:
1. Individual and Employer Mandate Taxes
2. Taxes on Health Insurance, Prescription Medicine and Medical Devices
3. High Medical Bills Income Tax ... http://www.foxnews.com/.../grover-norquist-why-repeal...

"When I walk down the street, and a mugger ... doesn't take my wallet, he didn't give me my wallet," Norquist analogized. "This idea when the government fails to steal your money ... and tax it, that it gave it to you is nonsense. It's not a gift."

Grover Norquist also highlighted a reduction in the corporate tax rate as a major pillar of GOP tax reform efforts. "We're going to take the corporate rate from 35 percent to either 15 or 20 [percent]. I like 15 better." http://www.cnbc.com/.../heres-why-trump-and-gop-leaders...

"The incoming administration should expand its tax package when it formally takes office. As Ronald Reagan did with his tax reform in 1986, it should reduce the brackets to two: in this case, 25% and 10%; it should also cut the levies on capital gains from 23.8% (this includes a 3.8% ObamaCare add-on) to 15% or less." -- Steve Forbes, http://www.forbes.com/.../why-trumps-tax-cuts-should.../...

"His plan would significantly reducemarginal tax rates onindividuals and businesses, increase standard deduction amountsto nearly four times current levels, and curtail manytax expenditures. His proposal would cut taxes at all income levels, although the largest benefits, in dollar and percentage terms, would go to the highest-income households. The plan would reduce federal revenues by $9.5 trillion over its first decade before accounting for added interest costs or considering macroeconomicfeedbackeffects. The plan would improve incentives to work, save, and invest. However, unless it is accompanied by very large spending cuts, it could increase the national debt by nearly80percent of gross domestic productby 2036, offsettingsome or all of the incentive effects of the tax cuts." -- AN ANALYSIS OF DONALD TRUMP’STAX PLANJim Nunns, Len Burman, Jeff Rohaly, and Joe RosenbergDecember 22, 2015, http://www.taxpolicycenter.org/.../analysis-donald.../full 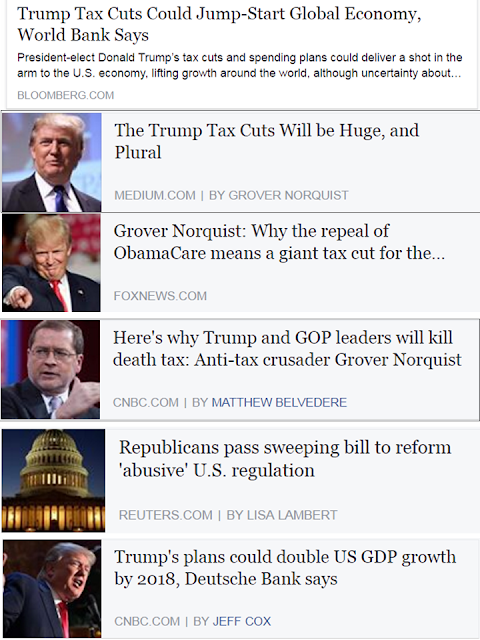 Now, what if the budget deficit balloons?
Good question. It's tax cut + spending cut. Lots of federal agencies are planned to be starved of excess funding

"an agenda that cuts regulations across a broad swath of critical sectors, enacts tax reform that slashes personal and corporate taxes, and calls for at least $1 trillion in improvements for bridges, roads and other public projects...


In raw numbers, that would push 2017 growth to 2.4 percent and 2018 up to 3.6 percent. By way of comparison, the economy has grown an average of about 1.6 percent a year under President Barack Obama, the worst recovery since the Great Depression. Obama is the first president since Herbert Hoover not to see at least 3 percent growth for a calendar year." http://www.cnbc.com/.../donald-trump-plans-will-double...
------------