I am reposting two good posts from a friend, Bernard Ong, posted yesterday and today. The news titles I just added here. Communists are communists, they are bullies, they hardly respect the rule of law, only the rule of men, the rule of dictatorship.
--------------

Justice Antonio Carpio listed 5 things Duterte can do "fulfill his constitutional duty" even if "the Philippines is no match to China militarily". 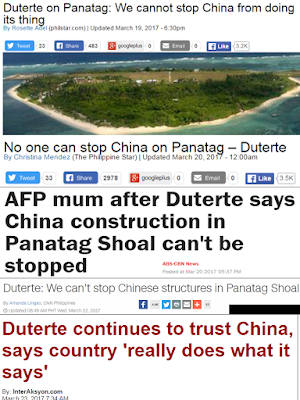 1) File a strong formal protest against the Chinese building activity

2) Send the Philippine Navy to patrol Scarborough Shoal. Should the Chinese attack, invoke the Philippine-US Mutual Defense Treaty, which covers any armed attack on Philippine navy vessels operating in the South China Sea.

3) Ask the United States to declare that Scarborough Shoal is part of Philippine territory for purposes of the Phil-US Mutual Defense Treaty.

4) Accept the standing U.S. offer to hold joint naval patrols in the South China Sea to demonstrate joint Philippine and U.S. determination to prevent China from building on Scarborough Shoal.

5) Avoid any act, statement, or declaration that expressly or impliedly waives Philippine sovereignty to any Philippine territory in the West Philippine Sea.

And we should add Duterte's own campaign promise:

6) Ask the Navy to drop him on the nearest safe point to Spratlys. Ride a jet-ski, plant our flag & challenge the Chinses to suntukan-o-barilan.

Giving up Spratlys, Panatag and soon Benham Rise to China; doing nothing; saying "we can't do anything"; all the while begging for Chinese loans & trains for Mindanao is not only dereliction of duty. It is treason.
-------------

China's reported plan to set up a permanent structure at Panatag Shoal met loud opposition from Philippine netizens. This was in stark contrast to Duterte's "can't-do-anything-about-it" defeatism.

Apparently feeling the heat (ok all ye noisy patriots give yourself a pat in the back now), China has since backtracked & said it is not building a monitoring station on Panatag. Chinese Foreign Ministry spokeswoman said "That does not exist at all".

So will China do what it says? Let us look at the evidence.

1. CHINA LIED ABOUT PANATAG BEFORE

In 2012, there was a standoff on Panatag involving the Philippine Navy's BRP Gregorio Del Pilar (whose crew tried to arrest Chinese fishermen who had illegally caught giant clams, corals & live sharks) and 2 Chinese Marine Surveillance ships (who blocked the Navy ship).

Ex-Philippine Ambassador to US Jose Cuisia Jr told a news conference that US State Dept brokered a deal for both sides to withdraw simultaneously from Panatag to avoid conflict. The Philippines complied. China reneged on the deal & did not withdraw its ships. "We were short-changed" Cuisia said.

2. CHINA LIED ABOUT KAGITINGAN BEFORE

Kagitingan - Fiery Cross Reef in the Spratlys - has been occupied by China since 1988.
It started with a marine station. Then the Chinese started reclaiming in 2014 - building one of seven artificial islands in South China Sea. Official excuse was to provide shelter for fishermen. They added a runway for an air base in 2015. Then anti-aircraft guns & weapons systems in 2016.

3. CHINA TALKS ON ONE HAND. MILITARIZES WITH THE OTHER

Asean and China began discussing a new, tighter Code of Conduct in 2010. China has been delaying negotiations to buy time to expand & consolidate its military position in South China Sea.

In 2015, the global trade in faked goods was valued at $1.77 trillion. 63% came from China. Taobao - the online shopping platform of Alibaba - is in U.S. government's blacklist of "world’s most notorious markets for counterfeit goods."

Domestically, the Chinese have faked practically everything - counterfeit goods, fake milk, fake rice, even a fake lion in a zoo that used a Tibetan mastiff to dupe visitors.

On the diplomatic front, other countries are wary of China.
An good pulse-check can be found in The Straits Times op-ed "Asean contends with gap between China's words and deeds" which is quoted here:

"On the South China Sea, Premier Li expressed the hope that "specific disputes be resolved through dialogue by the parties directly concerned and all countries in the region work together for peace, stability and development.”

“Almost on cue, Mr Li's reassuring words to Asean were put to the test when the Hainan Daily, a state-owned newspaper, quoted Sansha City mayor Xiao Jie as saying that the local government would build an environment- monitoring station on Scarborough Shoal, rattling the Philippines."

“But the Sansha City mayor's statement should not be brushed away. Sansha City was established by the Chinese government in 2012 as a prefecture-level city to administer China's maritime interests in the South China Sea, making Mr Xiao the most senior Chinese official on the ground privy to Chinese plans for the contested shoal.

China can even claim to be truthful if it went ahead & built a military airbase – instead of a civilian monitoring station – on Panatag. They said “No monitoring station.” They never said “No air base.”
Bottom line, should we trust China? Will China be better than Duterte at keeping promises? Or is this another moro-moro by a couple of proven hardened liars.
-------------