Rotational and scheduled brownouts for several hours about once a month, then unscheduled short brownouts from time to time, have become a regular experience in the two provinces of Negros island. Despite the installation of many huge solar plants in recent years.
I am currently in Sagay hospital in Negros Occidental to visit my seriously sick father. Last night, there was brownout for about 10 minutes, the hospital’s generator set immediately takes over to supply electricity to their patients and staff.

The Facebook page of the Central Negros Electric Cooperative (CENECO) gives frequent advisory of power interruption that lasts for nine hours (8 a.m. to 5 p.m.) until this month.

Stories and testimonies of frequent brownouts in many cities and municipalities of Negros Oriental in 2016 are also reported in dumagueteinfo.com.

In June 2016, the Department of Energy (DoE) said that line congestion is building up in Negros Occidental due to many solar power plants operating in the province. The abrupt influx of solar power plants is causing the main line, transmission and interconnection lines to congest (Sun Star Bacolod, June 10, 2016).

This month, Negros Occidental Electric Cooperative (NOCECO) explained that one of the main reasons of higher electricity is the increase in the transmission charge from P1.0538/kWh in January 2017 to P1.1777/kWh in February 2017 or an increase of 0.1239/kWh. The transmission rate hike is due to the increase in the ancillary service charges of the National Grid Corporation of the Philippines (NGCP).

There are at least two issues here. First is the presence of more brownouts in Negros island despite its having the most number of installed solar power plants per sq. km. of land in the whole country, more than 300 MW.

Solar power is very unstable and intermittent, zero output at night and very low output when it is cloudy, or power fluctuates wildly if clouds come and go in minutes. So there should be more ancillary services or standby power plants, usually natural gas or diesel plants, that should quickly provide power when thick clouds come and when evening comes. Still, this causes power fluctuations that damage machines, engines and appliances running on electricity and the leadership of Negros chamber of commerce and industry have pointed this out to the DoE and NGCP last year.

Second, how is the NGCP regulated and accounted in its transmission charge pricing and assets management?

Power generation is deregulated and hence, the extent of competition among many players is the main regulator of the generation charge. Distribution charge is regulated by the Energy Regulatory Commission (ERC) because distribution utilities (DUs) like Meralco and the roughly 119 electric cooperatives (ECs) nationwide are all monopolies in their respective franchise areas.

So while there are 120+ distribution monopolies composed of private DUs and ECs, the NGCP is a single, national monopoly in power transmission.

There are 12 different charges in our monthly electricity bill. The top six in the table below, and these five charges with lesser rates: (7) universal charge, (8) cross subsidy charge, (9) lifeline rate subsidy, (10) senior citizen subsidy, and (11) feed in tariff allowance (FiT-All). No. (12) are value-added tax (VAT) and other government taxes, these are huge too but not included in the table because they are unrelated to the electricity system. 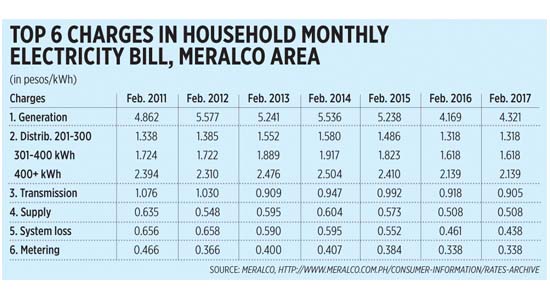 The possible explanations why the transmission charge by NGCP seems to be the odd man out among the top six charges are (1) rising cost of more ancillary services as more intermittent solar-wind power are added into the grid, (2) it passes its own system loss to the transmission charge, (3) it simply behaves like a typical monopoly, revenue-maximizing as consumers and other players have zero option of other service supplier/s. 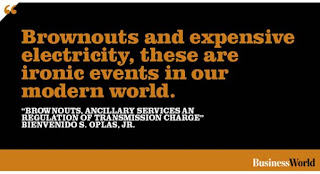 Brownouts and expensive electricity, these are ironic events in our modern world. We should have stable and cheap electricity, no brownouts even for one minute except after heavy storms and typhoons that knock down electrical posts and power lines.


Government should step back in some heavy regulations like forcing intermittent solar-wind into the grid which can discourage some developers who can build stable and cheaper power like coal and natgas plants. And giving high price guaranty for 20 years to renewables like wind-solar is wrong and punishing the consumers. Technology changes very fast, the costs of solar and wind equipment are falling fast, so why lock the high price for 20 years? This is wrong.
--------------