Mumbai, India -- The title of this piece is from JP Narayan of the Lok Satta Party in India, who made that comment during the Asia Liberty Forum (ALF) that was held from Feb. 10 to 11, 2017 in Mumbai.

That remark seems to apply in many countries where the rule of law is weaker and the rule of men -- especially those in charge of several forms of regulations -- are stronger. These are the types of people who also impose restrictions and prohibitions on their political enemies and ordinary folk but exempt themselves, their friends, supporters, and families.

Below are other insightful quotes and comments from other speakers during the ALF. The conference was jointly sponsored by the Center for Civil Society (India), Atlas Network, John Templeton Foundation, Smith Family Foundation (USA), and the Friedrich Naumann Foundation for Freedom (Germany).

1. “The word ‘Freedom’ has been lost because we mean ‘freedom from’ while an enormous number of people mean ‘freedom to.’” -- Linda Whetstone, Network for a Free Society (UK).

That quote is correct and the confusion may be rooted from the common definition of freedom as “freedom from coercion” (by the State or government, clan, church, gang, etc.) and is similar to Friedrich Hayek’s definition of liberty as “absence of coercion.” Linda also added that “Trade and exchange is not a zero sum game... both sides can be better off.”

2. “Inequality is not the issue; what bothers people is the ‘psychological threat to my perceived status.’” -- Tom Palmer, Atlas Network.

Take note that free people are not equal and equal people are not free. Freedom allows people to be super-efficient or be super-mediocre or absolutely irresponsible in their own lives. This personal decision automatically results in material inequality among people. The only equality that matters is equality before the law, or the equal application of the law on unequal people. Thus, the law against robbery should apply to all, from the President to the richest people to middle class, down to the poorest people.

3. “What we have in India is a PPP -- Perpetually Planned Poverty” -- Rajesh Jain, Free a Billion (FAB).

This is a funny but brutal parody and satire of an otherwise famous catchword in the Philippines and other countries of PPP (Public-Private Partnership) for big infrastructure projects. Rajesh was referring to various laws and restrictions by the government of India that he also called as “like air, it is all around you in India.”

He is referring to the various privileges and perks that cronies and state-protected corporate interests enjoy but are withheld from the rest of society. This is true because competitive capitalism is driven only by endless innovation and is anathema to state protectionism.

In November 2016, the Modi government pursued demonetization, a policy to remove all 500 and 1,000 (about $15) rupees from circulation to supposedly curtail the huge black market economy and counterfeit currency that funds illegal activities. These are exactly the currencies that hundreds of millions of poor Indians hold because of their low income and government has disallowed use of these. Very autocratic indeed.

6. “Globalization of capital is the most liberating force particularly for the poor.” -- Christopher Lingle, Universidad Francisco Marroquin, Guatemala 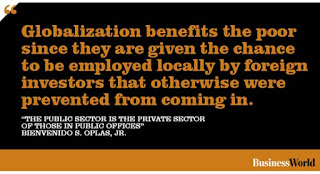 Contrary to common belief that globalization only favored big capitalists and businesses, globalization has benefitted the poor more in the form of (a) being employed locally by foreign investors that were otherwise prevented from coming in, (b) being employed abroad as they were assigned by their multinational firms or being hired by competing foreign firms, (c) being stockholders through time of both local or foreign firms as enterprise competition intensifies.

7. “Regulatory focus is to tap down on innovation because nobody understands something new. Lack of rule of law leads to adverse selection. Legitimate firms exit, leaving only bad actors.” -- Susan Thomas, Indira Gandhi Institute for Development Research, India.

This is true. The implicit or explicit purpose of regulation is to limit and restrict innovation that can lead to business disruption and more income inequality. Some regulations simply kill innovation and we do not see or realize it because it was not initiated in the first place. Lack of rule of law means high rule of men; only friends and cronies of rulers will prosper while the non-cronies will remain small or exit the market.

This attitude by regulators of tax-tax-tax whenever there is perceived new income seems to apply in many other countries too. Former US President Ronald Reagan has a good summary of this when he said: “If it moves, tax it; if it keeps moving, regulate it; if it stops moving, subsidize it.”

Ultimately, yes. It is a battle between state-worshippers and regulators and the public or regulated parties who want more economic freedom. There are in-betweens of course, like people who move from the regulated to becoming regulators and vice versa.

There were many other useful comments and ideas during the conference but there is not enough space for this column. I am simply thankful to the Economic Freedom Network (EFN) Asia for giving me the travel grant to attend the event.

Bienvenido S. Oplas, Jr. is the head of Minimal Government Thinkers and a Fellow of SEANET. Both institutes are members of EFN Asia.
----------------