The Philippines experienced a seemingly energy revival in 2016 and 2017 with plenty of new power plants commissioned and running. Mindanao experienced an energy surplus after many years of frequent involuntary “Earth hours” or almost daily blackouts lasting for many hours.

So it is ironic that while new power capacity were added into the grid, Luzon including Metro Manila, still incurred occasional “yellow alerts” in power supply. This indicated near-brownout situations that took place a few weeks ago since several power plants went offline all of a sudden, coinciding with maintenance and repair shutdowns that were scheduled ahead of time.

Some groups blame “collusion” of some generating companies (Gencos) to stage an artificial power deficiency and thus, command higher prices for several hours on those “yellow alert” situations. However, they offer little proof and numbers to back up this claim.

For me, the more plausible and visible cause is the undeclared “collusion” of various groups including many government agencies and environmentalist groups to delay if not stop the installation of more power capacities to have huge reserves that can (a) cover even huge unscheduled power shutdowns and (b) bring down electricity prices further as a result of intense competition. See table below as proof.

With only 700+ kWh/person/year in 2014, that puts the Philippines slightly higher than the electricity use of poor neighbors Cambodia and Myanmar, and only half the electricity consumption of Vietnam, 1/4 that of Thailand, 1/7 that of Malaysia and 1/13 that of Singapore.

Last Friday, March 3, I attended the forum on “Institutionalizing Energy Projects as Projects of National Significance” by Sen. Sherwin Gatchalian, Chairman of the Senate Committees on Energy and Economic Affairs, sponsored by the Energy Policy Development Program (EPDP) held at the UP School of Economics (UPSE) Auditorium.

The senator recognized the problem of low power capacity of the Philippines in general, and some big islands in particular. There are many big committed and indicative power plants lining up but they often encounter bureaucratic delays. 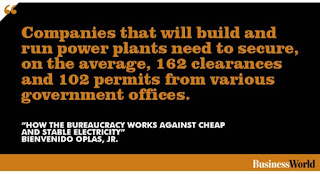 A paper, “An analysis of time to regulatory permit approval in Philippine electricity generation” (2016) by Laarni Escresa of EPDP showed that on the average, power plant operators need to secure 162 clearances (MBC, 2014) and 102 permits.

So the Senator’s bill will prioritize these big power plants (P3.5B or higher in capitalization) for faster approval process. For instance, agencies are given 30 days to check the documents submitted; if they fail to act on time, it is deemed that the papers are approved and permits be automatically granted.

Alan Ortiz mentioned something that’s somehow a shocking figure: Boracay’s electricity needs rose from 8 MW just 10 years ago to 100 MW today. From 8 to 100 MW in just 10 years -- that’s a lot.

Undersecretary Posadas gave a good assurance that the DoE is “agnostic” on the source of energy (renewable or not) and want to see more power plants coming in. He also said that the DoE will no longer issue a 3rd round of feed-in-tariff (FiT) for wind-solar. Good announcement.

Another factor that contributes to uncertainties in power generation are those inefficient and losing electric cooperatives (ECs). They just get power from the Wholesale Electricity Spot Market (WESM) and distribute to their customers and do not pay the many Gencos that happened to supply their electricity needs.

From the Philippine Electricity Market Corp. (PEMC), here are the top three market participants or players which have unpaid energy settlement Amounts at WESM as of Feb. 27, 2017:

The numbers above exclude the unpaid amount of ALECO in their Special Payment Agreement with PEMC amounting to nearly P1B.

The National Electrification Administration (NEA) does not seem to properly discipline certain ECs under its belt. To have an old debt of nearly P1B and new debt of nearly P100M from one EC alone (Aleco) should be a red flag indicator that this type of prolonged and sustained inefficiency and losses have been tolerated.

The NEA should step back from this and other problematic ECs and force them to corporatize and be subjected to bankruptcy laws under the Securities and Exchange Commission (SEC).

The Philippines and its electricity consumers need stable and cheap electricity. They do not need the burden of being dependent on ECs that lose money and are unable to pay generation companies that further add uncertainties to bureaucratic delays.

Bienvenido Oplas, Jr. is the president of Minimal Government Thinkers and a Fellow of SEANET and Stratbase-ADRi.
---------------

Posted by Bienvenido Oplas Jr at 8:32 AM