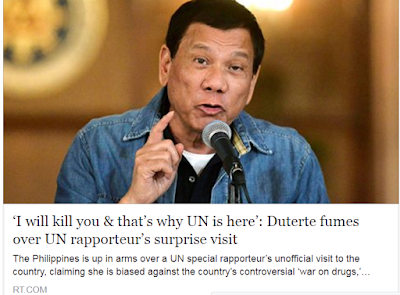 “And here’s the shocker: I will kill you. I will really kill you. And that’s why the rapporteur of the UN is here, investigating extrajudicial killing,” Duterte said, referring to drug dealers as he was addressing an orthopedic conference in Davao City, as cited by The Philippine Star.

“I told them that once you get involved in drugs I will kill you. I will ambush you, poison you, bomb you, whatever. Steal your wife from you,” the Philippines leader added. – May 6, 2017, https://www.rt.com/news/387205-duterte-un-killings-complaint/

Many sectors also bring up the LP/yellow/dilawan in the visit by Ms. Callamard. Why divert the issue? PDu30 and his many agencies can quickly organize a forum with that lady anywhere, anytime, challenge her to a public debate because she opted to come here, pulverize her arguments if they can, they did not do it.

"We are aware that Dr. Callamard is currently in the Philippines and we are disappointed that, in not contacting our government in advance of this visit, she has sent a clear signal that she is not interested in getting an objective perspective on the issues that are the focus of her responsibility" - Spokesman Ernesto Abella.

Hold your carabao, Ernie. She is not here for you. No need to announce her visit dahil wala kayo sa agenda niya. Your are being paranoid. Which part of "extrajudicial, summary or arbitrary executions" triggered your praning reaction. Fentanyl muna to ease your worries.

Turns out Dr Callamard is here to attend & address a drug policy forum sponsored by CHR & Free Legal Assistance Group at UP Diliman. Government is actually represented in the forum by its lead drug agency - Dangerous Drugs Board. Sayang. Kung hindi lang sana takot si Duterte sa UP Diliman, he could have gone there to share his "Kill. Kill. Kill" approach.

So there. Dr Callamard is not here for you. Wait lang muna, your turn will come. You can relax. She is also braver than you.

Unlike you, she is not afraid of going to UP Diliman.

(3) WHAT THE UN RAPPORTEUR SAID

Presidential counsel Salvador Panelo used her speech as basis to claim that she is incompetent to probe killings in War on Drugs in the Philippines – that Callamard already made conclusions based on news reports, some videos, opinions of critics, and hearsay.

SUMMARY OF HER SPEECH

1. There’s a document called ‘Our Joint Commitment to Effectively Addressing and Countering the World Drug Problem’ drafted by heads of states assembled at UN General Assembly.

5. Governments did not commit to War-on-Drugs approach. Instead they called for balanced approach including health, rights & justice.

6. They did not suggest death penalty as an appropriate or effective response to drug trafficking or use. Instead they spoke about proportionate sentencing & alternative punishments.

7. In April 2016, the UN General Assembly recognized that ‘War on Drugs’ does not work. It is well documented around the world that bad drug policies fail to address drug dependency, drug criminality & drug trade.

9. In all research undertaken around the world, none of the countries that adopted War on Drugs made the drug problem disappear. In fact, the opposite happened.

10. Conference in UP Diliman is to learn from local & foreign experts who have studied drug policies, their impact & effectiveness....