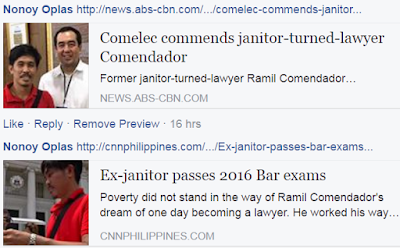 There is a nice and somehow sensational story this week about a former janitor at the Commission on Elections (Comelec), pursued law studies as a working student, and passed the Bar Exams, results were released last Tuesday.

My lawyer-friend from UP, Comelec Commissioner Luie Tito Guia posted this in his fb wall last Wednesday:


Thank you for the inspiring visit Compañero Ramil Comendador. May there be more of you in this world. It was in this office, then occupied by Comm. Rene Sarmiento, where he started working for Comelec.

Allow me please to incorporate in this post, Comm. Rene's story:

"SPECTACULAR BAR EXAM NEWS! In 2006, he applied for work in my office at COMELEC as utility man/ janitor. I had not met him from Adam but knowing he was from Catanduanes and was very passionate to work with me, I accepted him. He comes from a poor family "Ang sahig nila sa probinsiya ay lupa." While working in my office, he asked me if he could study after office hours and I said yes. He finished his pre-law studies, living a Spartan way of life. Very simple. After pre-law, he asked me if he could study law. I said "Why not?" He received much encouragement from my legal and non-legal staff. His cheering squad. After my retirement from the COMELEC, he contnued his law studies. Today, he is now ATTY. RAMIL COMENDADOR. Today, I say "I bless the Lord. So great is your faithfulness to Ramil!""

Atty. Rwn Caliba was one of the lawyers in the office Comm Sarmiento and he shared this:

"I first met this guy in 2007. We both started working for Commissioner Rene V. Sarmiento at the COMELEC in that same year. While we fussed with legal concerns at the Legal Unit, he was silently and patiently doing his tasks: cleaning our office and doing errands without complaint. While everybody was headed home, Ramil had to rush to his classes.

Almost a decade after that meeting in 2007, his efforts paid off. Congratulations to a good colleague and friend.

I think the dispensers of many government freebies -- free healthcare, free cash transfer, free housing (ala Kadamay), free univ. education, etc. -- may be unhappy with self-driven poor people like him. They can get out of poverty with minimal government freebies.

In the literature of endless freebies to "fight poverty", government politicians, officials and consultants do not ask the the micro and personal aspects of poverty, they just throw away tax money to poor and pretending-to-be-poor people. A person who does not want to work, or a person who works 4 hours then complains about work for another 4 hours, or a person who works 6 days a week but also drinks and parties 6 nights a week and have zero savings, will become poor, 101%. Yet government throws endless, no timetable subsidies.

Self-driven and ambitious people will quickly reduce poverty and these state officials and consultants may be unhappy with that. Mababawasan ang racket nila.

A friend, DJ Castro alerted me on this person who criticized people who applaud this new lawyer. Very insecure comments, see this.

Email ThisBlogThis!Share to TwitterShare to FacebookShare to Pinterest
Labels: welfarism