BWorld 131, Why the FiT-All is a burden to consumers

Last May 15, Transmission Corp. of the Philippines (Transco) presented at the Energy Regulatory Commission (ERC) its petition of Feed-in-Tariff Allowance (FiT-All) for 2017 of 26 centavos/kWh. Very fast adjustments from 4.06 centavos/kWh in 2015, rose to 12.40 centavos in 2016, and soon 26 centavos starting mid-2017, all “to save the planet.”

The ERC still has to conduct public hearings in Visayas and Mindanao until early June and likely to make an order by late June, to be reflected in our monthly electricity bills starting July 2017.

The feed-in-tariff (FiT) provision in the Renewable Energy (RE) Act of 2008 (RA 9513) is very anomalous on the following grounds: (1) guaranteed price locked in for 20 years despite technology improving very fast these days, (2) the FiT rates are rising (see table below) yearly due to inflation and forex adjustments, (3) FiT rates of P8+ to P10+ per kWh for wind-solar are way high compared to current Wholesale Electricity Spot Market (WESM) average prices of P2-P3/kWh, (4) current capacity installations for wind and solar are higher than what was allotted, and (5) even consumers in Mindanao who are not part of WESM, not connected to the Luzon-Visayas grids, are paying for this.

Below are the beneficiaries of expensive electricity via FiT scheme by virtue of their hugeness and higher FiT rates. 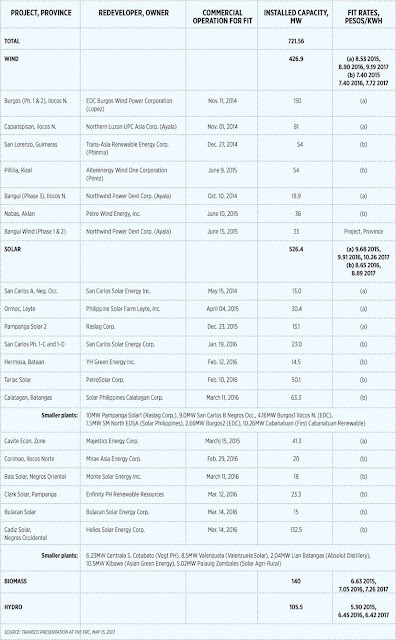 Many renewable firms were not able to snatch the limited FiT eligibility but they can still make money from expensive electricity via the renewable portfolio standards (RPS) provision of the RE law. The RPS coerces and forces distribution utilities (DUs) like electric cooperatives and Meralco to purchase a minimum percentage of their electricity supply from these expensive renewables, the price differential with cheaper conventional sources they will pass to the consumers. If DUs will not do this, they will be penalized and the cost of penalty they will still pass on to the consumers. 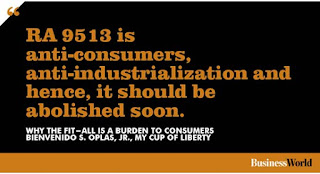 The government should step back from price intervention and price control, grid prioritization of intermittent and unstable energy sources via legislation. Consumer interest of cheaper and stable electricity should be higher than corporate interest of guaranteed pricing for 20 years, lots of fiscal incentives and other privileges that are marks of cronyism. RA 9513 is anti-consumers, anti-industrialization and hence, it should be abolished soon.
------------