I am reposting some recent reports about efforts by many developing Asian countries to grow fast via cheaper energy from coal power. Enjoy.
--------------

"Pakistan’s Water and Power Ministry... investment project with China, it’s committed to spending $15 billion on as many as 12 new coal power plants over the next 15 years…

To anyone who would criticize the move, Piyush Goyal, India’s power minister, had this to say: “India is not a polluter," he told the Financial Times. "It’s America and the western world that has to first stop polluting.” There’s a grain of truth to that: America and Europe did a lot of coal burning during their development, and now have strong economies to leverage in order to clean up their acts.” – May 3, 2017, https://www.technologyreview.com/s/604323/india-and-pakistans-continued-love-affair-with-coal/

"$54 billion China Pakistan Economic Corridor (CPEC), which includes spending of about $33 billion on a total of 19 energy projects, including coal-fired and renewable power plants, transmission lines, and other infrastructure.

Combined, the projects will eventually generate 16,000 megawatts (MW) of electricity, which the government says is urgently needed. About three-quarters of the newly generated power will come from coal-powered plants, and the government insists that these will be fitted with the latest technology to reduce pollution and climate-changing emissions.” – May 2, 2017, http://www.reuters.com/article/us-pakistan-energy-coal-idUSKBN17Z019

"China’s production of electricity from coal stayed at elevated levels post the northern hemisphere winter after reaching a high of 423.6 billion kWh in December – and the highest level recorded based on available data going back to January 2010.

And electricity production from coal in March 2017 rebounded strongly following the Lunar New Year lull in February, rising 7.7% year on year to 396.1 billion kWh, according to the National Bureau of Statistics data." – May 2, 2017, http://blogs.platts.com/2017/05/02/china-coal-fired-power-generation-surprises-naysayers/

"India is heavily reliant on coal for its electricity, more than three-quarters of which was generated by its 132 coal-fired power stations in 2014-15, according to the most recent data from the central electricity authority. However, while it is the world’s third-biggest emitter of greenhouse gases in absolute terms, its per capita emissions are a fraction of many other nations’, at just 1.59 metric tonnes a year, compared with 7.55 for China and 16.39 for the US." – May 3, 2017,

"A MoneySuperMarket report listed Mozambique, Ethiopia and Zimbabwe as having “the most environmentally friendly people in the world,” while ranking Americans as being some of the least eco-friendly people on the planet. That may not be a bad thing, though, given the greenest countries also tend to be poor and run by authoritarian regimes." – April 22, 2017, http://dailycaller.com/2017/04/22/worlds-greenest-people-live-in-ridiculously-poor-authoritarian-regimes-graph/ 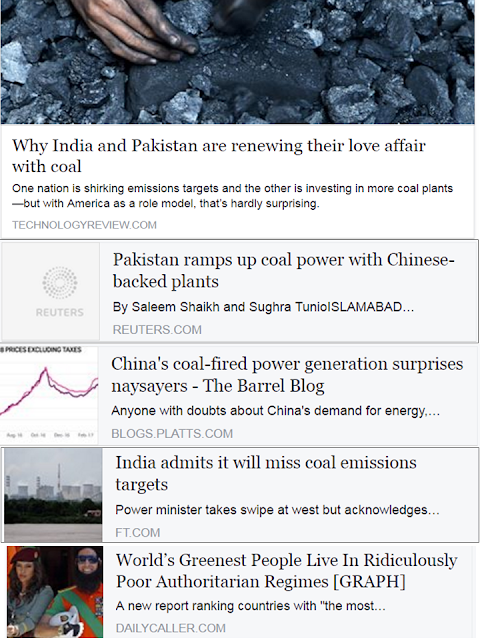 "America was built on cheap and abundant coal. Fossil fuels powered the U.S. into the industrial age and replaced inefficient windmills and woodburning as the primary sources of electricity. America currently has access to 500 years’ worth of coal — far more than any other nation. Even despite the last decade’s war on coal during the Obama years, the U.S. still derives about one third of our power from coal — second only to natural gas." – April 17, 2017, https://spectator.org/coals-colossal-comeback/

“China’s fundamental demand for coal and natural gas has improved alongside better-than-expected economic growth in the first quarter,” Tian Miao, an analyst at North Square Blue Oak Ltd. in Beijing, said by phone. “The government’s investment in infrastructure has boosted power consumption while the move to replace coal with gas to fight pollution is also gaining some traction for gas demand.” – April 17, 2017, https://www.bloomberg.com/news/articles/2017-04-17/china-coal-production-rises-as-government-avoids-output-limits

"Coal conversion has become profitable in China because of an unusual combination of low coal prices relative to state-set gas or petrol prices.  Coal-to-liquids projects normally make economic sense only when oil prices are high or supply is limited. The technology was first developed in Nazi Germany, and commercialised in apartheid-era South Africa." https://www.ft.com/content/02931290-1d94-11e7-a454-ab04428977f9

"despite a huge workforce of almost 400,000 solar workers (about 20 percent of electric power payrolls in 2016), that sector produced an insignificant share, less than 1 percent, of the electric power generated in the United States last year (EIA data here). 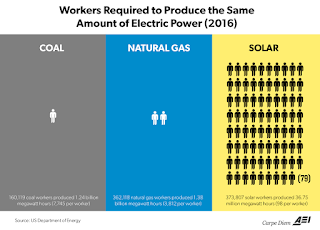 In contrast, it took about the same number of natural gas workers (398,235) last year to produce more than one-third of U.S. electric power, or 37 times more electricity than solar's minuscule share of 0.90 percent. And with only 160,000 coal workers (less than half the number of workers in either solar or gas), that sector produced nearly one-third (almost as much as gas) of U.S. electricity last year." – May 3, 2017, http://www.washingtonexaminer.com/todays-most-productive-energy-workers-are-in-coal-and-gas-not-solar/article/2622029 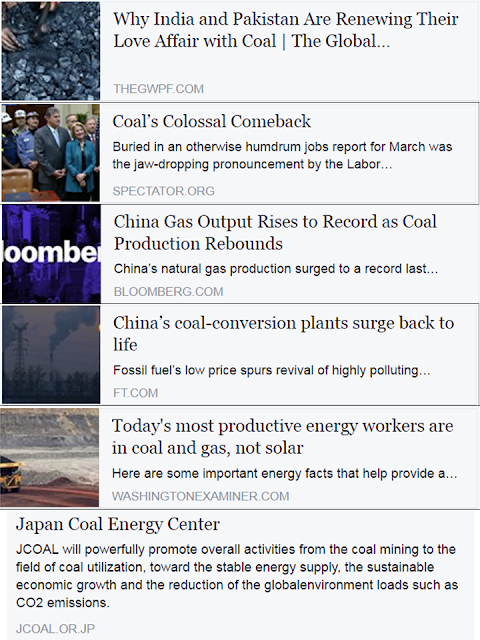 "According to a recent International Energy Agency (IEA) report, Japan’s 600 MW Isogo plant in Yokohama is probably the best in the world. It is an ultra-supercritical HELE plant, with emission levels comparable to a natural gas combined cycle (NGCC) power plant." -- April 18, 2017, https://dddusmma.wordpress.com/2017/04/18/japan-and-china-remarkably-clean-coal/

"The Petra Nova carbon capture system was installed in the W.A. Parish generation station. This is the largest and cleanest fossil fuel generaton station in the United States." -- April 18, 2017, https://wattsupwiththat.com/2017/04/18/clean-coal-carbon-capture-and-enhanced-oil-recovery/

India's "plans to build nearly 370 coal-fired power plants... The construction of 65 gigawatts worth of coal-burning generation with an additional 178 gigawatts in the planning stages would make it nearly impossible for India to meet those climate promises, the researchers say." -- April 25, 2017, https://wattsupwiththat.com/2017/04/25/india-wont-be-able-to-meet-paris-climate-agreement-commitments-due-to-expanding-coal-power-plants/ 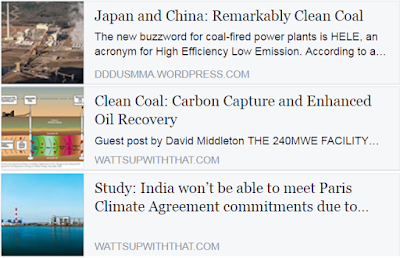 1. http://www.jcoal.or.jp/eng/
2. GWPF, “THE PARIS AGREEMENT and the Fifth Carbon Budget” by David Campbell,