On April 21, 2017, PH Defense Secretary Delfin Lorenzana and top officials of the AFP went to Pagasa island, near Subi Reef that CN has illegally occupied. I say "illegal" because the UN PCA (The Hague, Netherlands) ruling says that CN's claims at the SCS/WPS have no international legal basis.

Good move, Defense Secretary. Please do this more often. If CN will shoot down your plane and kill you, you will be a new hero.

The CN communist government remains arrogant. And any PH government official who will placate China despite its continued belligerence and arrogance should be exposed. Including the President if he continues his lick-a__ attitude to the commie government in Beijing.

The report says, "The plane, during such incidents, is told it is entering Chinese territory." Pagasa island is "Chinese territory" haha. And PDu30 is silent, not slam-dunking with his usual "PI nyo/Pakyu" China.

Taiwan, Vietnam, other countries also claim some of those islands and atolls at the SCS, but they are silent, did not make any challenged to the visit of the PH Defense Secretary. In the case of CN, their claim to the area is wholesale -- political, legal, military, etc. See other news -- "CN protests PH defense chief's Pagasa island visit", but we don't hear or read a similar "VN or TW protests..."


China will soon swallow its own pill. VN, US, others will not recognize CN claim on those artificial islands. That is why Defense Sec. Lorenzana's move is good, something that PDu30 never did. He recently ordered the AFP to occupy PH islands in the disputed territories, palusot after his many kowtow statements to China. After a series of public defeatism with the commies across the sea, he needs to shake his "joke only" image with respect to China.

About the PH fishermen who were driven away by CN boats, I bet Du30 will reprimand instead the Pinoy fishermen, something like "sinabi ko nang wag lumapit sa isla ng China eh. Atin yan dati, ngayon sa kanila na".

PNoy was right in asserting the international rule of law on the seas, PDut is wrong to ignore it, and FVR sides with PNoy. 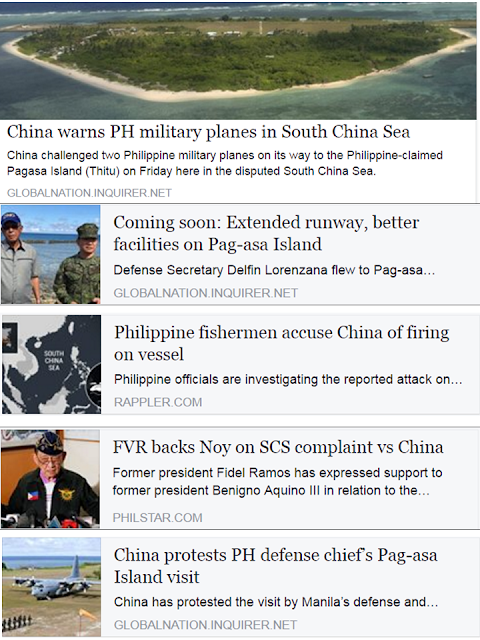 Meanwhile, I am reposting comments from a friend, Bernard Ong. He posted these April 21 and 23.

If the Chinese shoot down the plane carrying the Filipino Defense Secretary to our own territory in Pagasa Island...

I bet he sends his deepest apologies to China, checks with them if the deal for trains + loans + banana exports is still on, goes on an angry incoherent speech about how we should not have tested China's resolve, tells the military they should focus on Jolo instead, then bans future voyages on sea & air by Filipinos to that area to avoid 'provoking' the squatters.

Don't give me that "but he's sincere, will stake his life and honor" bullshit. Look at me in the eye & tell me I'm wrong. Kumander Topak is a traitor.

(2) WAITING FOR THAT RANT

C'mon if you can do it to the US - the #1 military superpower in the world - launching your curses & insults at China should be easy.

Show us some of that "I am willing to die" and "I will stake my life, my honor, my presidency" drama. Don't forget the flag-draping & fist bump for added effect.