According to the bible of Al Gore, the UN and other groups/individuals, we should be guilty that we are riding cars, jeepneys, buses, motorcycles, airplanes, boats, other machines that use fossil fuels. We should be riding only cows, horses, bicycles, skateboards other things that do not use fossil fuel. We should be guilty that we have 24/7 electricity mainly from base load coal and natgas power plants. Thus, we should send them more money via carbon tax so that they can "save the planet." Nice but not-so-brilliant global robbery scheme.
http://www.washingtonexaminer.com/a-fools-errand-al-gores-15-trillion-carbon-tax/article/2622479 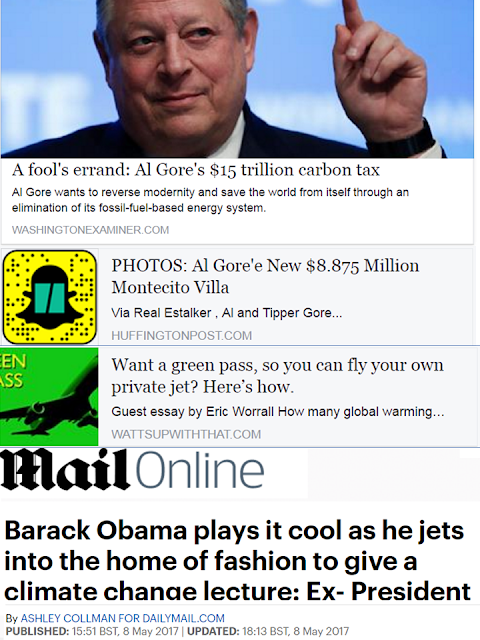 The purpose of a carbon tax is to make cheaper energy, cheaper transpo, cheaper manufacturing, become expensive. National governments, the UN and Al Gore will get the extra money, trillions of $ of money and they will "save the planet". http://www.carbontax.net.au/category/what-is-the-carbon-tax/

Meanwhile, the WB, IMF, ADB, DOF, etc already made a chorus that petroleum is a "public bad" because our use of cars, buses, boats, motorcycles, airplanes are bad for the environment, so they are raising the excise tax of petrol products by P6/liter across the board. Some legislators are not satisfied with this, they want additional tax on petrol products, coal power plants, etc. to get more money to "save the planet." http://www.philstar.com/science-and-environment/2016/11/10/1642091/carbon-tax-eyed-philippine-polluters

People who are "non-polluters" are those who have zero demand for fossil fuels like petroleum and coal power plants. Like those who live in the caves, those who only ride horses, carabaos, bicycles or just walk/run only. For their trips to far away provinces and countries, they ride flying witches like manananggals that do not use fossil fuels.