Cheaper and stable energy means cheaper production costs for the industrial, agricultural, and services sectors of the economy. Cheaper energy also results in increased convenience for consumers too as many activities now are impossible without stable electricity supply.

In the modern history of Asian economies’ rapid growth, the use of coal power is an important contributor for their economic expansion. 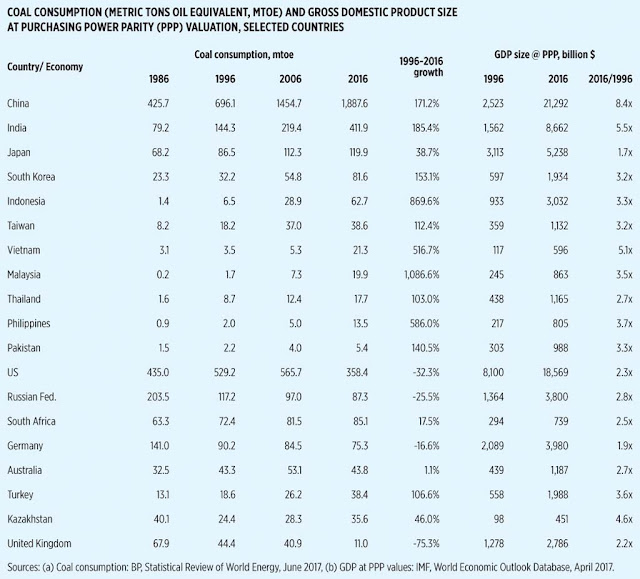 (2) Countries with declining coal use are also those with slow economic expansion (below three times expansion of GDP size). Most notable are the US, Russia, Germany, and UK.

(3) Philippines’ coal use is actually small compared to its neighbors; its 2016 use is just nearly 1/2 of Malaysia and Vietnam’s consumption, just 1/3 of Taiwan’s and almost 1/5 of Indonesia’s. South Korea, Japan, India, and China’s consumption are many times bigger than the Philippines’.

This covers a total of 3,550 MW of stable and affordable energy that can lead to cheaper and reliable electricity supply for more than 20 million people in Metro Manila, Bulacan, Rizal, Cavite, Laguna, and parts of Batangas and Quezon provinces.

These groups -- Center for Energy, Ecology, and Development (CEED), Philippine Movement for Climate Justice (PMCJ), Sanlakas, Freedom from Debt Coalition (FDC), Koalisyong Pabahay ng Pilipinas (KPP), Power for People (P4P) member organizations, others -- argue that coal plants are detrimental for the people’s health and livelihood as well as bad for the environment.

What is bad for the people’s health and livelihood are more candles and noisy gensets running on diesel when there are frequent brownouts coming from intermittent, unreliable renewables like solar and wind. Candles are among the major causes of fires in houses and communities.

What is bad for people’s health and security are dark streets at night that contribute to more road accidents, more street robberies, abduction and rapes, murders and other crimes. Many LGUs reduce costs of street lighting when electricity prices are high (ever-rising feed-in-tariff or FiT for renewables, more expensive oil peaking plants are used during peak hours, etc.). Expensive and unstable electricity can kill people today, not 100 years from now.

Seeking to disenfranchise some 3,550 MW of stable and cheaper energy supply from seven coal plants is suspicious. There are no big hydro, geothermal, and biomass plants coming in. Wind and solar are limited by their intermittent nature, have low capacity factors, high capital expenditures, and often are located far away from the main grid. The only beneficiaries of disenfranchising big capacity coal plants then would be the owners of new natural gas plants.

Are natural gas cheaper than coal power? From the recent experience of Mindanao where many big coal plants were commissioned almost simultaneously, the answer seems to be No. The generation price in Mindanao has gone down to below P3/kWh, on certain days even below P2.50/kWh. Which means coal power has big leeway for lower price if competition becomes tighter. This cannot be said of natural gas plants here.

Consumer groups and NGOs should bat for cheaper, stable electricity. If they fight for something else like intermittent and expensive renewables, or more expensive gas plants, then they abdicate their role as representatives of consumer interests. Pathetic.

Bienvenido S. Oplas, Jr. is the head of Minimal Government Thinkers and a Fellow of SEANET, both are members of Economic Freedom Network (EFN) Asia.
----------------