is the world’s biggest (cobalt) producer, with 60 per cent of the planet’s reserves. The cobalt is mined by unregulated labour and transported to Asia where battery manufacturers use it to make their products lighter, longer-lasting and rechargeable.

The planned switch to clean energy vehicles has led to an extraordinary surge in demand. While a smartphone battery uses no more than 10 grams of refined cobalt, an electric car needs 15kg (33lb)."
http://www.dailymail.co.uk/news/article-4764208/Child-miners-aged-four-living-hell-Earth.html

"The worldwide rush to bring millions of electric vehicles on to our roads has handed a big advantage to those giant car-makers which saw this bonanza coming and invested in developing battery-powered vehicles, among them General Motors, Renault-Nissan, Tesla, BMW and Fiat-Chrysler."
https://wattsupwiththat.com/2017/08/07/child-miners-aged-four-living-a-hell-on-earth-so-you-can-drive-an-electric-car-awful-human-cost-in-squalid-congo-cobalt-mine-that-michael-gove-didnt-consider-in-his-clean-energy/ 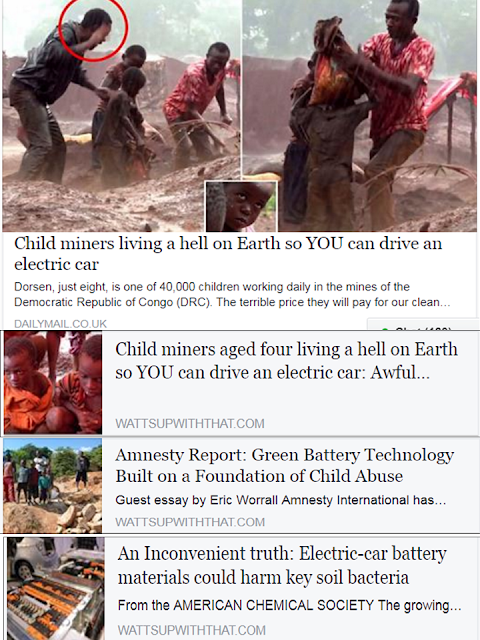 "This report is the first comprehensive account of how cobalt enters the supply chain of many of the world’s leading brands."
-- From WHAT WE DIE FOR: HUMAN RIGHTS ABUSES IN THE DEMOCRATIC REPUBLIC OF THE CONGO POWER THE GLOBAL TRADE IN COBALT", Amnesty Intl report, January 2016, https://www.amnesty.org/en/documents/afr62/3183/2016/en/

"When too much cobalt is taken into your body, however, harmful health effects can occur. Workers who breathed air containing 0.038 mg cobalt/m3 (about 100,000 times the concentration normally found in ambient air) for 6 hours had trouble breathing. Serious effects on the lungs, including asthma, pneumonia, and wheezing, have been found in people exposed to 0.005 mg cobalt/m3 while working with hard metal, a cobalt-tungsten carbide alloy. People exposed to 0.007 mg cobalt/m3 at work have also developed allergies to cobalt that resulted in asthma and skin rashes."
-- TOXICOLOGICAL PROFILE FOR COBALT,
by the U.S. DEPARTMENT OF HEALTH AND HUMAN SERVICES, April 2004, 486 pages long,
http://www.atsdr.cdc.gov/toxprofiles/tp33.pdf

"Problems can creep in when these batteries are disposed of. Scientists, in a new study in ACS’ journal Chemistry of Materials, are reporting that compounds increasingly used in lithium-ion batteries are toxic to a type of soil-dwelling bacteria that plays an important environmental role.

An estimated 20 million electric vehicles are expected to be on the road by 2020, according to an International Energy Agency report. Each one of these will likely contain more than 83 pounds of nanoscale cathode materials, potentially including a class of compounds called lithium nickel manganese cobalt oxides (NMCs)." -- American Chemical Society, February 2016,
https://wattsupwiththat.com/2016/02/10/amnesty-report-green-battery-technology-built-on-a-foundation-of-child-abuse/

stick to the issue -- huge need for cobalt mining worldwide, cheaper cobalt batteries so that their expensive and fanciful e-cars can become more "affordable." Without mentioning the Koch brothers, Trump, Spiderman or any other personalities they dislike, they should stick to the issue. Prove that large-scale cobalt mining especially from DRC is good to help "save the planet." Even Amnesty Intl., among the believers of "save the planet" mantra has already spoken about the evils of large-scale cobalt mining in Congo.

About Tesla e-cars. On average they get $7,500/car subsidy from US taxpayers, to make expensive e-cars become "affordable". The cheapest Tesla car I think costs about $34k (about P1.7M), already "discounted" with US taxpayers' subsidy.

Governments should step out picking winners and pampering them with lavish subsidies at the expense of taxpayers. Anti-mining "planet saviour" groups and individuals will likely remain silent about this anomaly; worse, they may even defend such type of mining because it conforms with their political and environmental biases.

Posted by Bienvenido Oplas Jr at 12:58 AM