Aside from frequently cussing and cursing or threatening people with state-sponsored murders over his anti-drugs war, President Rodrigo R. Duterte (PRRD) is not exactly known for articulating policies on industrialization. But during the State of the Nation Address (SONA) this year, he was able to coherently explain his dreams for the country.

“That is why I say that it is not enough that we mine this wealth. What is more important is that we convert the raw material thereof into finished products for international and local purposes. That way, it will not only be the few who are the rich but also the poor who are many who will benefit therefrom.

Therefore, I call on our industrialists, investors [and] commercial barons to put up factories and manufacturing establishments right here in the Philippines to process our raw materials into finished products.... if possible, we shall put a stop to the extraction and exportation of our mineral resources to foreign nations for processing abroad and importing them back to the Philippines in the form of consumer goods at prices twice or thrice the value of the original raw materials foreign corporations pay for them.”

This is an understandable concern and aspiration.

Is the Philippines ready now to undertake this mining-to-industrialization quickly?

The 53-page paper gives a number of useful data about the sector. It concluded that “judging by experience, the search for national industrialization in the mining sector would be difficult. In the past, the record of the Philippines in this regard was one of failure. This, however, should not prevent the country from attempting once again especially given the importance of industrialization to the growth of the economy.”

It added, “the knowledge base of the country required to pursue the national industrialization strategy is poor. The following studies therefore were suggested: a) value chain analysis for the mining sector and its sub-sectors, including but not limited to the copper, nickel, gold and chromite industries; b) development of community-based small and medium-scale operations in mining including the technology, financial, institutional and other forms of government support that could be provided to them...”

What are the stages of supply chain from mineral extraction to finished products? In one illustration, Dr. Israel identified these nine stages.

The country is currently engaged in stages (1) to (5), perhaps up to (6), depending on the metallic products. So the challenge is to find investors, local and foreign who can do stages (6) to (9). And it will not be easy to attract these large investors who need large requirements before they bring in their money and technologies.

Dr. Israel said that there should be a “comparative advantage” for the country to make this possible. This advantage includes the following: (a) location of mineral deposits to be processed; (b) relative factor costs and input prices; (c) availability of processing technology, (d) distance from major markets and the associated transport costs, and (e) the security of supply.

He cited Glance et al. (1992) who said that factors that affect the costs of a prospective processing location and activities are: (a) the cost of meeting environmental regulation which can vary from site to site of operations, (b) market for by products as the profitability of smelting and refining often depends on the ability of processors to sell by-products, and (c) government intervention, which can directly or indirectly distort investment decisions and trade flows.

The last item, government intervention, is very important. Interventions can span from A to Z, from where to explore and mine and where not, how to do it, how much payments in taxes, fees, permits, bonds, mandatory funds and contributions, both local and national.

Seemingly not mentioned in Dr. Israel’s paper is the role of electricity -- cheap, stable supply of electricity that is available 24/7. Intermittent energy like wind-solar will be a disincentive for mining-to-industrialization development because they are heavily dependent on the weather, not on consumer demand.

Plenty of big and reliable base-load plants from coal power have been installed in recent years. This means 24/7 of cheap, stable electricity is assured now and the medium-term.

The industrialization dream has been restated and the energy infrastructure has been set up. 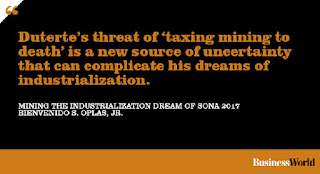 What the President should assure now is the rule of law, stability of policies, that there will be no more Gina Lopez type of government officials whose happiness rests on how many mining companies he/she has suspended and/or closed. His threat of “tax mining to death” during the SONA is a new source of uncertainty that can complicate his dreams of industrialization.
------------