Why is China doing this? Aileen said there are three main reasons.

(3) Strategic -- avoid Malacca dilemma, make the South China Sea irrelevant in developing transport and trading links in the region, access to ports and airports reduces need for overseas air and naval bases, and compete with the US influence and perceived containment efforts against China.

This is incisive analysis from a local scholar. She also showed maps of the Silk Road Beltway, the Maritime Road covering the three continents of Asia, Europe and Africa, and the Pan-Asia railway network.

In many discussions on China’s BRI, often left out is China’s energy agenda that spans practically the same continents and countries. Here are just three of several reports on this aspect.

(1) From NY Times, July 1: “When China halted plans for more than 100 new coal-fired power plants this year… China’s energy companies will make up nearly half of the new coal generation expected to go online in the next decade.

These Chinese corporations are building or planning to build more than 700 new coal plants at home and around the world, some in countries that today burn little or no coal, according to tallies compiled by Urgewald.”

(2) From China Dialogue, May 5: “Global Environment Institute (GEI) figures show that between 2001 and 2016 China was involved in 240 coal power projects in BRI countries, with a total generating capacity of 251 gigawatts. The top five countries for Chinese involvement were India, Indonesia, Mongolia, Vietnam and Turkey.”

(3) From Financial Times, March 31, 2016: “China’s proposed investments in long-distance, ultra-high voltage (UHV) power transmission lines will pave the way for power exports as far as Germany… Exporting power to central Asia and beyond falls into China’s ‘one belt, one road’ ambitions to export industrial overcapacity and engineering expertise as it faces slowing growth at home.”

Europe’s problem is that they are committing sort of energy mini-suicide by relying more on intermittent wind-solar and closing down many of their reliable and big nuclear and coal power plants. So here comes China with huge domestic coal supply capacity plus additional coal plants in countries along the BRI route. It will have the capacity to augment Europe’s energy needs via those UHV transmission lines and power sources are several thousand kilometers away (see table). 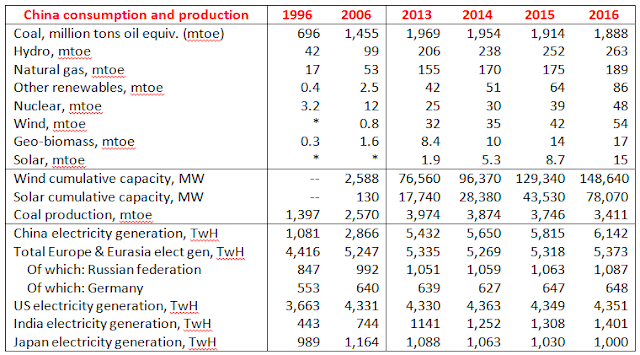 Notice the huge discrepancy between installed capacity of wind-solar and China, and the very small actual electricity output from them.

In a forum on “The Framework Code of Conduct, One Year After Arbitration” organized by Stratbase-Albert del Rosario Institute (ADRi) last July 12 at the Manila Polo Club, among the speakers were Roilo A. Golez, former National Security adviser; Antonio T. Carpio, senior associate Justice, Supreme Court of the Philippines, and Dr. Jay Batongbacal, director of UP Institute for Maritime Affairs and Law of the Sea.

Justice Carpio highlighted the energy aspect of China’s occupation of shoals and creation of artificial islands in the South China Sea or West Philippine Sea, and the huge implication for the Philippines if China will occupy areas near Malampaya, currently the source of about 3,000 MW of natural gas plants based in Batangas. Malampaya natural gas is expected to be exhausted around 2024 or less than a decade from now. We shall have massive, daily blackouts for many hours daily if no new gas is discovered or new gas facility is created.

China has a different agenda in its massive BRI project, some are useful, some are harmful to their partner countries. The Philippines should craft foreign affairs and energy policies that will secure the country’s economic needs, not China’s needs.