“I hope we once again have reminded people that man is not free unless government is limited. There’s a clear cause and effect here that is as neat and predictable as a law of physics: as government expands, liberty contracts.”

Perhaps the first intellectual in China and the world who championed individual liberty was Lao Tzu (600 BC). He was born more than 2,000 years before Adam Smith wrote and called for a “simple system of natural liberty.” Here, Lao Tzu wrote referring to government:

The more restrictions and limitations there are, the more impoverished men will be...

The more rules and precepts are enforced, the more bandits and crooks will be produced. Hence, we have the words of the wise (the sage or ruler):

Through my non-action, men are spontaneously transformed.

Through my noninterference, men spontaneously increase their wealth.

And talking about taxes, especially Dutertenomics’ TRAIN, the numbers below should be a good reminder that it is largely a train for more government coercion and interventions.

A short definition of these concepts: (a) Total taxes (TT) are the sum of corporate income tax + labor taxes + other taxes; (b) Total tax rate (TTR) = TT/private enterprises’ net and taxable income, in percent (see table). 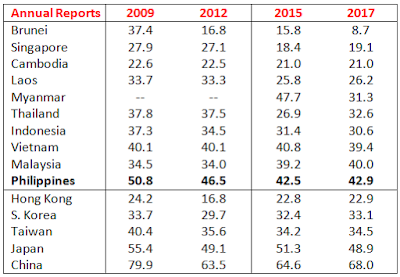 Based on these numbers, we both have good and bad news.

The good news is that the Philippines has a declining TTR, from almost 51% in the 2009 PWC report to nearly 43% in the 2017 report. Other economies with declining TTR are Brunei, Singapore, Laos, Indonesia, Myanmar, Taiwan and Japan. Only Malaysia has a deteriorating or rising TTR.

These are the more controversial aspects of Dutertenomics’ TRAIN -- (a) hike in excise tax for oil products and new cars, (b) introduction of additional tax on sugar-sweetened beverages, and (c) expansion of VAT coverage to more sectors including business process outsourcing (BPO).

To help dispel the ugly label of “Philippines having the highest TTR in the ASEAN and other East Asian economies,” tax proposals (a) and (b) should have been abandoned, and 12% VAT (highest in the ASEAN) should be reduced to only 6%, probably even 8% and cover more sectors including BPO. The main reason why many sectors lobbied for exemption from VAT is because 12% is high.

To help fund Dutertenomics’ build-build-build plan without those new taxes and tax hikes, the government should cut spending on some agencies and bureaucracies whose welfarist goals and mandates overlap with other agencies. Then rechannel the savings to more infrastructure spending. But this is now wishful thinking as the TRAIN is on a fast track of legislative wreckage.

SFL-PH President Joseph T. Bautista has invited me to be one of the speakers on Day 2 of the event and I gladly accepted the honor. SFL CEO Wolf von Laer will give the keynote address. Other speakers will be Thomas Laughlin, CEO of Amagi; Luis Sia, president of UpStart; Shahab Shabibi, CEO of World by Machine Ventures; Mahar Mangahas, president of Social Weather Stations (SWS); Imantaka Nugraha of SFL-Indonesia, and Markus Löning of Friedrich Naumann Foundation for Freedom (FNF).

I will talk about state coercion and legislations in the energy sector, infrastructure, and fiscal policies during the SFL conference.


Bienvenido S. Oplas, Jr. is the head of Minimal Government Thinkers and a SEANET Fellow. Both are members of Economic Freedom Network (EFN) Asia.
--------------