This is a continuation of two earlier pieces I wrote about that compared two funding schemes of government infrastructure projects in the Philippines -- through public-private partnership and official development assistance.

In this vein, I wish to correct the numbers I previously cited in my second piece, entitled “PPP vs. ODA: Part 2.” I wrote that “Vaughn Montes cited the big contrast between ODA-funded SCTEx and the PPP-funded TPLEx. SCTEx... cost nearly twice at $32.8 billion vs. the approved budget of $18.7 billion or P341 million per kilometer. TPLEx cost only P61 million per kilometer.”

Recently, Dr. Bong Montes sent me his presentation during a Management Association of the Philippines (MAP) meeting. The correct numbers about SCTEx are: Cost overruns are from P18.7B to P32.8B; Cost per kilometer is P349M vs. TPLEx P274M. Thanks for this, Bong.

The same presentation indicated a summary of the delineation of risks and values between Public Private Partnership (PPP) funding and government funding (see Table 1).

The main beef of PPP project funding therefore is the transfer of significant risks to the private sector. The shared risks for both private and government are bankability and force majeure.

The “hybrid PPP” plan of Dutertenomics is to award the construction of many big infrastructure projects via foreign aid or Official Development Assistance (ODA) mostly from China, or the annual General Appropriations Act (GAA), then invite local private operators later for the operation and maintenance (O&M).

This plan will invite big current and future controversies for the following reasons.

One, private O&M operators will not take over a facility that they did not design and construct without prior intensive due diligence. If project quality is poor and thus O&M will be high, then bidders will demand high prices for the O&M. The government-contracted construction company (from China) may have undercut the design and quality to maximize profit and potential kickbacks and leave the headache of high maintenance costs to the separate O&M operator/s.

The most optimal scheme is a straight, integrated PPP funding from design and construction to O&M. The private party mobilizes its internal financial muscle and borrows to fund capex, and make sure that construction is of high quality so that O&M will be lower. As a result, the public and the taxpayers benefit, which also means a lower tax burden to pay for the project cost. Moreover, frequent users of the facility will pay every time they use it and taxpayers from far away provinces and regions who seldom or do not even benefit from it will not be burdened.

Two, Dutertenomics’ sudden pivot to China ODA is highly anomalous because China is not exactly a good source of foreign aid even in the recent past. Its share in total ODA in 2014 and 2015 (latest data available from NEDA) is miniscule, only $123M out of total $30.08 billion (see Table 2). 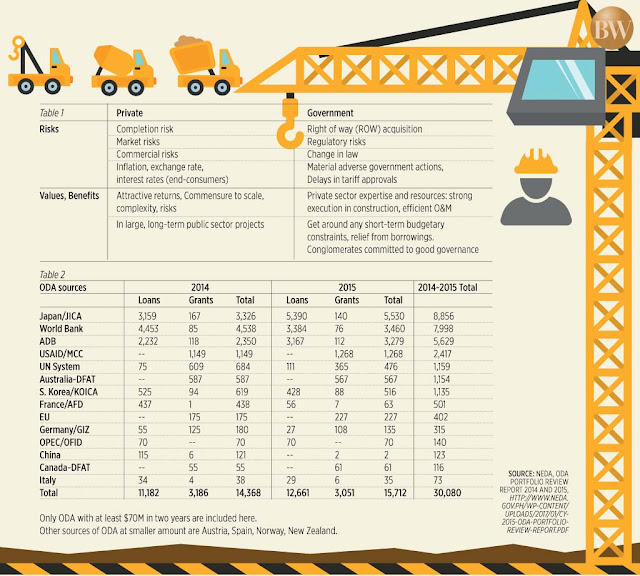 Only ODA with at least $70M in two years are included here. Other sources of ODA at smaller amount are Austria, Spain, Norway, New Zealand.

The most famous tollway in the Philippines, the North Luzon Expressway (NLEx) was built via World Bank ODA in the 1970s. O&M is private, currently the Manila North Tollways Corp. (MNTC). The independent design checker and certification engineer on its rehabilitation is Norconsult Philippines, probably the first Norwegian company to do business in the country since the ’70s. NLEx toll fee of around P2.50/kilometer from Sta. Ines to Balintawak is the lowest among the many tollways in the country.
-------------