BWorld 219, The US-North Korea summit and the global economy

* This is my article in BusinessWorld last Wednesday, June 6.

The summit meeting between US President Donald Trump and North Korea leader Kim Jong-Un (KJU) this coming June 12, 2018 in Singapore is marked with several paradoxes.

North Korea’s economy is small because it has focused its resources on its military and nuclear capabilities. As a result, most of its 25 million people are starving and are deprived of several basic services, including but not limited to reliable and dependable electricity service.

Last month, a historic summit meeting was held between KJU and South Korean President Moon-Jae In with both parties discussing the formal ending of the Korean War and to finally establish peace and prosperity between the two countries in the peninsula.

An important event aiding this Trump-KJU summit is the renewed vigor of the US economy by which it can reassert its role as main “anchor” of global trade, investments, and economic dynamism. Let us review some numbers as to why this may be possible.

The last time the US economy posted a GDP growth of at least 3% was in 2005 or 13 years ago — it grew 3.3% that year. The eight years of “hope and change” under President Obama did not produce a single year of 3% growth or higher.

China as second global economic “anchor” continues to grow fast but no longer in double digit figures, owing to the declining pace of its expansion. 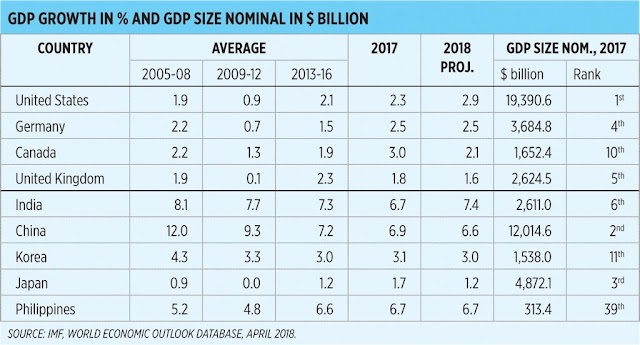 With the world’s no. 1 economy rolling on high growth path and immediate neighbors being the 2nd, 3rd and 11th biggest economies in the world, the opportunities for North Korea to quickly transition from a hermit-like, autarkic economy to regional and global economic integration is high.

It will not be surprising then if Apple, Samsung, Google, Microsoft, McDonalds, Toyota, Shangri-la, other big global brands will put up offices and factories in North Korea months after the Trump-KJU meeting.

Is a North-South Korea reunification as one country like the East-West Germany reunification, desirable? It will be better if they remain as two separate countries linked by heavy commerce and investments, like Malaysia-Singapore and EU countries.

Bigger countries and economies tend to be more bureaucratic than smaller ones. Compare for instance China-Hong Kong, Indonesia-Singapore, India-Bhutan, Russia-Finland, and so on.

Peace and prosperity, more commerce and trade, more investments and tourism, more sports and cultural exchanges, more energy and electricity, and not more tanks and missiles. This is the kind of economic development in the region that many people and businesses around the world hope to see.
---------------